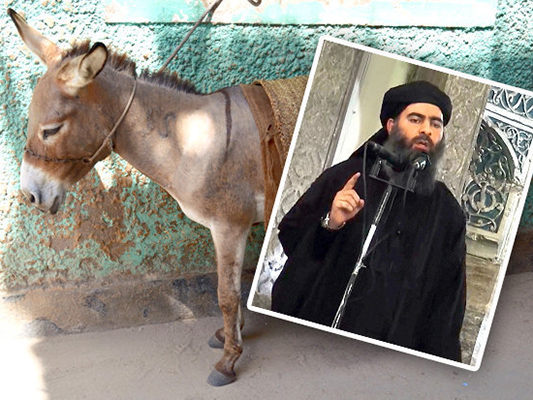 The ISIS’ demented regime has plunged to new depths as it slaughters innocent animals for “mocking” leader Abu Bakr al-Baghdadi.

The twisted extremists attacked donkeys in the ISIS-held city of Mosul after someone plastered them with photographs of the so-called “caliph” Abu Bakr al-Baghdadi, as reported by Daily Mail and covered by Al Alam.

Donkeys are considered a low, dirty animal in many Arab countries and the paranoid fighters took it as an insult to their leader.

The fighters, who are facing annihilation as the Iraqi army surrounds the city, reportedly chased the poor beasts through the streets and killed them.

Iraqi news website al-Sumaria News said, “Unidentified persons put the photos of the ISIS leader Abu Bakr al-Baghdadi on donkeys in central Mosul – and this pushed the ISIS members to pursue the donkeys to kill them.

“ISIS mobilised its fighters in the city and raided a house in order to search for the people who hung Baghdadi’s pictures on the donkeys.”