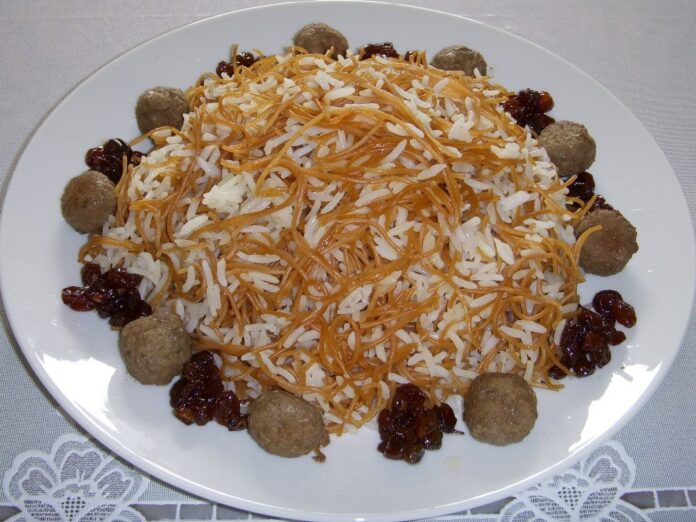 As a common practice among the people of different religions, cultures and nationalities around the globe on the eve or first days of the New Year, Iranians serve their traditional dishes on the initial days of Nowruz. Reshteh Polo is one of these popular dishes which is made on the first Saturday of the new year.

According to a report by Sarzamin-e Man magazine, among the main traditional dishes prepared and served on the eve or first day of Nowruz are Samanu (an Iranian sweet paste made entirely from germinated wheat), Sabzi Polo Ba Mahi (a mixture of rice and chopped herbs with fried fish), Kaak (a pastry and souvenir of the western Iranian province of Kermanshah), and Reshteh Polo (thin noodles with rice).

What follows is a brief look at Reshteh Polo and the recipe and instructions for cooking it:

Although, currently, many maintain that Sabzi Polo Ba Mahi is the main dish served on the eve of or the first day of Nowruz, up until a few years ago, certain Iranian ethnic groups prepared and served their own specific dish on the occasion.

Reshteh (thin noodles) Polo (rice) is one of the main Iranian dishes, traditionally, made on the eve of or the first day of Nowruz. It is still quite popular among Iranians in Nowruz and other times of the year. Still, many people in the north western Iranian provinces of East and West Azarbaijan as well as the country’s western and north eastern regions make Reshteh Polo on the initial days of the New Year. They believe that the interwoven noodles, one of the main ingredients of the food, symbolize the twisted real-life affairs and cook the food to be able to untangle the complexities of their life and get hold of their affairs. Here is the recipe and instructions for preparing the dish.

Ingredients needed to prepare the dish for up to six people:

Four cups of rice, 1.5 cups of noodles, a medium-sized onion, one cup of raisins, one cup of ground meat, salt, pepper, saffron and oil, as much as required, as well as some dates (optional)

Soak the rice in water a few hours prior to the start of the cooking process. Then, drain the rice and pour it in a stock pot. Put the stock pot on the gas stove, turn on the flame and add some oil and salt to the rice. After the mixture started boiling, untangle the noodles and pour them into the boiling mixture. After a few minutes, using a colander, drain the mixture.

Pour some oil into the stock pot and, then, cover the bottom with a sheet of bread or slices of potato. Shut the lid of the stock pot. To help the ingredients cook thoroughly, enfold the lid in a piece of cloth before sealing the stock pot with it. In the meantime, chop the onion and fry it. Then add the ground meat to it. Fry the mixture of the ground meat and onion for as long as the mixture’s water is evaporated. Now add some salt, pepper and turmeric to the meet.

Add the raisins, earlier soaked in water, to the meat and, then, pour the saffron, you have previously infused, into the mixture. After the water of the saffron was evaporated, turn off the flame. Now, you can pour Reshteh Polo into a dish and ornament it with the mixture of ground meat, raisins, dates and saffron. If you want your dish to keep its traditional flavour, you can add the raisins and dates to the rice [instead of the ground meat mixture] and cook them together.