Discrimination against people of color have been institutionalized in America 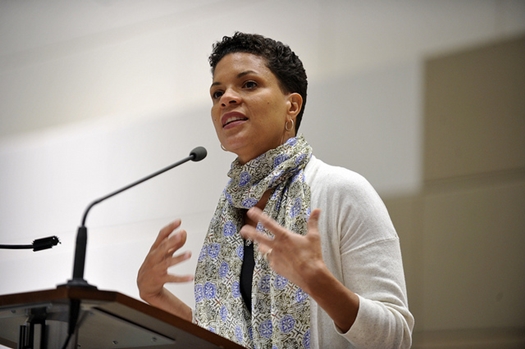 Michelle Alexander, a US lawyer, has blamed a long history of white supremacy for discrimination against the black people in America.

A US lawyer says there is a striking difference between the black population serving time in prisons in the US State of New York and the white inmates.

Michelle Alexander, who is an associate professor of law at Ohio State University, a civil rights advocate and a writer, made the comment in an exclusive interview with the Islamic Republic News Agency and added the difference is clearly indicative of discriminatory laws in the US and institutionalized injustice to the people of color.

On May 28, followers of a religious sect held a rally in Brooklyn, the most populous borough in New York City, chanting slogans against injustice done against the black people in New York and other US states. The following is the translation of what Ms. Alexander said in the interview with IRNA on May 29:

The legal scholar disputed claims by US lawmakers and law enforcement on more willingness on the part of African Americans to commit social delinquencies and said that such baseless claims have been used as an excuse to do injustice to the black people, adding that’s why the enforcement of social laws on people of color has failed miserably.

The white people who take and sell drugs outnumber the black people by a large margin, but the percentage of the black people who land in jail on charges of using or selling drugs – even carrying meager amounts – is incredibly higher than the white individuals.

Alexander said that white supremacy has a history of 400-500 years in this country and has been etched as a dominant mentality in people’s minds, adding such a mindset has automatically justified institutionalized discrimination in the US.

She went on to say that such a mindset has turned it into a psycho-social habit and thus people don’t care about how black people are judged. As a result, a majority of the white people use any misdemeanor by the black people as justification for their attitude.

The violent reactions of some African Americans in clinging to their social and civil rights and in opposition to unfair laws have resulted in them being identified as criminals in society, she said.

The only way to get rid of such a mentality which is stronger in the southern states goes through provision of social amenities and elimination of discrimination against the black people.

Michelle Alexander is also the author of 2010’s “The New Jim Crow: Mass Incarceration in the Age of Colorblindness,” a book already considered by many to be among the most influential of its time.
› Subscribe
Share
Facebook
Twitter
ReddIt
Email
Print
Telegram
WhatsApp
VK
LINE
Viber