Deviant and reactionary currents are too dangerous 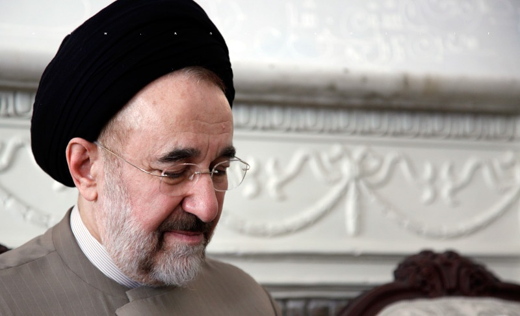 Mohammad Khatami, the president of the Foundation for Dialogue among Civilizations, says some deviant groups commit appalling crimes in the region in the name of Islam.

Aftab-e Yazd, a reformist daily, on December 14 reported the remarks of former President Mohammad Khatami and the founder of BARAN [Foundation for Freedom, Growth and Development of Iran] on the need for the portrayal of a kind, constructive and pioneering face of the Islamic Republic. What appears below is a partial translation of what the reformist president had to say in a meeting with the family of martyr Mostafa Mousavizadeh:

Efforts should be made to show a neat, kind, constructive and pioneering face of the Islamic Republic to the whole world. This is what the late Imam Khomeini, martyrs and people have called for.

We are now at a critical juncture. There are groups in the region which commit unspeakable crimes in the name of Islam. They are perverse, devious and reactionary currents which walk down the path already taken by big powers.

Over-reactionary and suspicious currents have tightened the screws [on people in the region] and this is dangerous.

Iran’s revolution introduced an Islam which sought honor, glory, progress and welfare for people, one which tried to help serve justice. We need to respect such an Islamic mindset and its achievements.

Ex-President Khatami Calls on Nation to Vote in Iran Elections