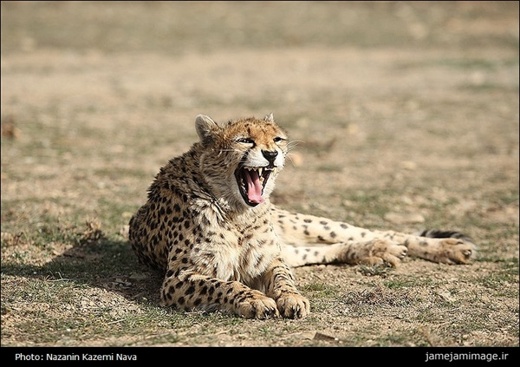 Further tests and even a sonogram will be run in the presence of a foreign consultant in late March to determine whether she is pregnant.

Kooshki, a 7-year-old male, and Delbar, a 3-year-old female, are two Asiatic cheetahs who have been in captivity in Mian Dasht Wildlife Sanctuary in North Khorasan Province and in Khar Turan National Park in Semnan Province respectively. In December, the two big cats were transferred to a research site in Tehran where they first met.

What follows is the translation of a report the website of Iran Environment and Wildlife Watch posted on March 5 about how the two cheetahs are doing:

Acting on the expert advice of Sean McKeown, a foreign consultant of the Conservation of Asiatic Cheetah Project, Delbar and Kooshki spend three days together every 12 days.

The pair has established a very close relationship. The male cheetah seems to be enjoying the new company more than the female feline.

They are likely to have mated and there are speculations that Delbar is expecting. But, because the mating season has not finished yet, further tests and even a sonogram will be run in the presence of the foreign consultant in late March to determine whether she is pregnant.