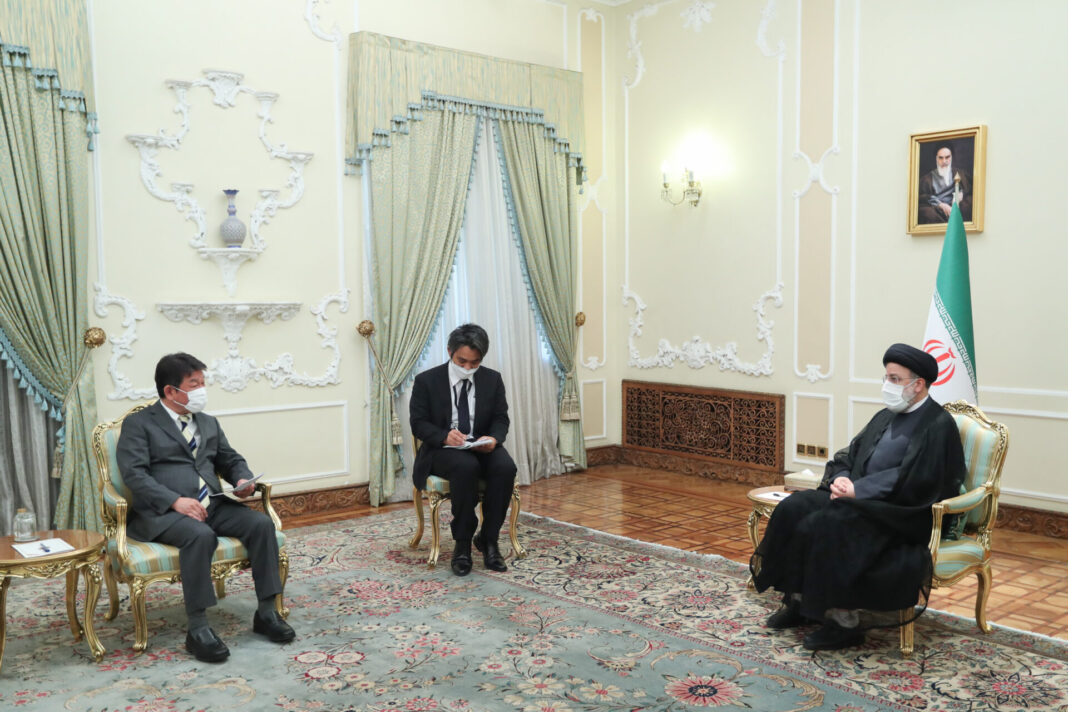 Iranian President Ebrahim Raisi has called for the immediate release of Iran's frozen resources in Japan, noting that further delay in the release of the assets blocked in Japanese banks cannot be justified.

President Raisi made the remarks in a Sunday meeting with Japan’s Foreign Minister Toshimitsu Motegi in Tehran.

In the meeting, Raisi complained that the Europeans have also refused to fulfil their obligations under the 2015 nuclear deal following the United States.

“Iran has complied with all its obligations under the JCPOA and it is the Americans who have not fulfilled their obligations and unilaterally withdrew from the international agreement and expanded sanctions.”

Emphasising that Iran has no problem with the principle of negotiation, the President said, “With what justification should the US sanctions against the Iranian nation continue?”

He thanked Tokyo for its humanitarian assistance in the fight against coronavirus, and expressed hope that the continuation of cooperation between the two countries in this field will help eradicate COVID-19 in both countries and the world.

The President described Iran-Japan relations as good and friendly and stressed the need to develop and deepen relations between the two countries in all fields, especially economic and trade relations.
“For the Islamic Republic of Iran, relations with Japan and the development and deepening of bilateral relations is of great importance,” he noted.

In another part of the meeting, Raisi referred to the recent developments in Afghanistan, and welcomed the efforts of Japan and other countries in the region to help establish peace and stability in Afghanistan and the region.

“The Islamic Republic of Iran has always supported peace and stability in Afghanistan, of course, we believe that in Afghanistan, Afghans must decide for themselves,” he added.

“The presence of Americans in the region, including Afghanistan, has not only not brought security to the country, but has posed threats, and today, after 20 years, Americans are admitting that their presence in Afghanistan was wrong,” he said.
He added, “We will undoubtedly see this admission in the near future in the case of other countries in the region as well as the Persian Gulf states.”

Seeking authority in any form in the world would not be in the interest of any nation or region, the President said, adding that “the bullying of the Americans poses a threat to the independence, freedom and identity of nations, and opposing the coercive powers is a necessity for all countries.”

Japanese Foreign Minister Toshimitsu Motegi, in turn, congratulated Raisi on his inauguration, and stressed the development and deepening of the two countries’ long-standing relations and said, “Iran and Japan have had good and friendly relations for a long time and I have no doubt that these relations will develop further during the term of office of the new government.”

“Tokyo has always supported the JCPOA as an international agreement, and we believe that the revival of the deal is in everyone’s interest and can solve problems,” he said, stressing Japan’s efforts to bring peace and stability to the region.

“Tokyo supports the diplomatic efforts of the countries in the region to achieve peace and stability in the region, and our principled position is that the problems must be resolved peacefully and through dialogue,” he said.