Creator of A Separation in a close-up 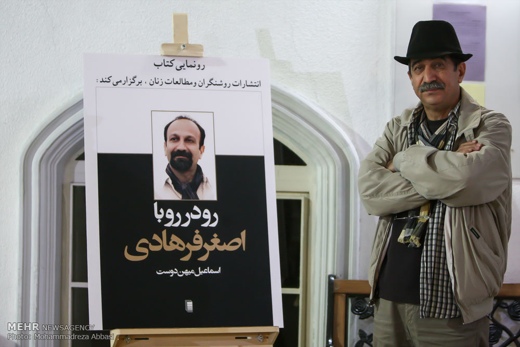 Face to Face with Asghar Farhadi, a book by Esmaeil Mihandoust, offers a vivid portrait of the renowned Oscar-winning Iranian film director.

The author of Face to Face with Asghar Farhadi says that his book is a training workshop for cinema students and lovers. “Just like Farhadi, who was successful in reconciling general and special audiences, as well as domestic and foreign viewers, this book too holds special appeal for readers at home and abroad. That’s why I’m trying to have it translated into English, French and German,” said Esmaeil Mihandoust.

Khabaronline on February 14 released a chat with Mihandoust about his recent work and the reason why he has picked the renowned Iranian filmmaker – who created A Separation for which he won the Academy Award for Best Foreign Film – as the theme of his book. The following is a brief translation of the interview:

The book has been warmly welcomed by cinema students and those involved in the film industry, including cinematographers, acting cast, sound recorders, set designers, etc. Pundits, even those who do not specialize in cinema, and average viewers can find the book’s dialogues attractive.

I intentionally overlooked Farhadi’s private life – something which in my view is not the right thing to do – because his popularity is because of his professional career.

Like a portrait documentary [which falls under the expository category], this book can be called a written portrait of Farhadi’s professional life. As the readers flip through the book, they are given an [general] overview of Farhadi’s character.

The general audience would not find anything interestingly readable in the book if they have not watched Farhadi’s movies. The salient feature of his films is that he makes a balance between his audience, general and special, as well as Iranians and foreigners.

Some Iranian filmmakers were given a warm welcome in European festivals but their films did not hit the big screen back home. Others are household names inside Iran. Farhadi could reconcile mainstream and special audiences. Everybody will find attraction in his films from their own perspective. […]

Liveliness and dynamism is the standout feature of Face to Face with Asghar Farhadi. From the cinematic angle, I have tried to let go of journalistic approaches (in its negative sense). The book intends to pass on to the high-brow audience a message beyond the films, especially because it has made mention of specialized topics such as POV [point of view], casts and directing bag of tricks. All these points will implicitly get the following message across to the cineastes and film critics: ‘Do not pay attention to the themes of motion pictures alone.’ Unfortunately, only film plots are elaborated on in most review sessions.

The topics raised in the book translate into a verbal review. I have discussed the films to the best of my knowledge and raised untold points, trying to highlight how, not what, something should be said in cinema. I think in an artistic work, “how to say” is more important than “what to say”. I tried my best to convey the howness to the audience.