Chinese, Iranian Musicians Give Joint Performance in Memory of Seafarers 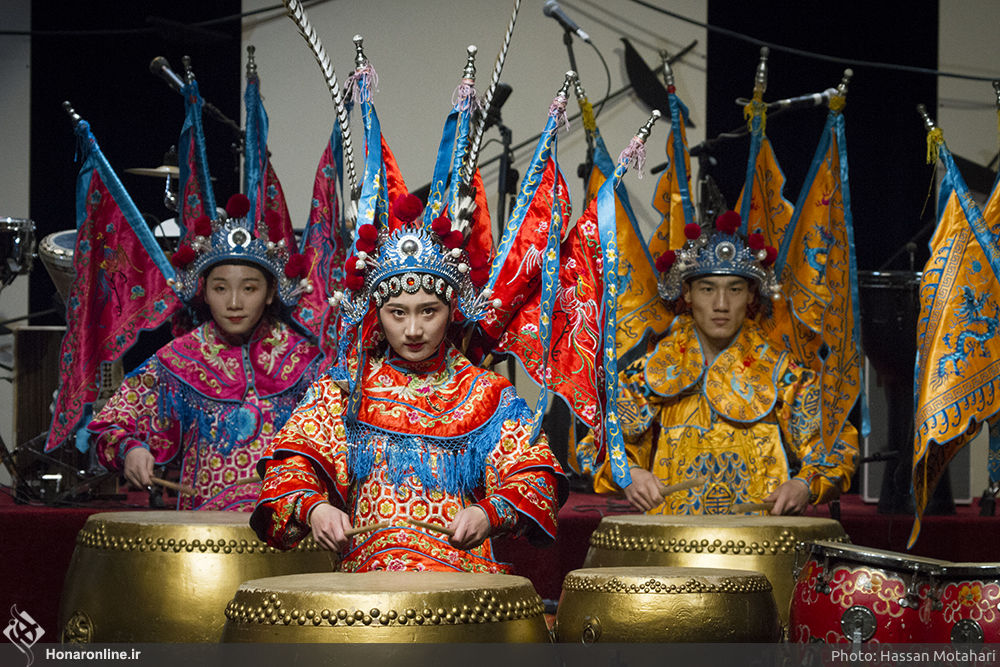 On the third day of the thirty-third International Fajr Music Festival, a band from China has given a joint performance with Iranian musicians and dedicated one of the songs to the Iranian sailors who are feared dead in a ship collision in Eastern China.

The members of the Chinese Drama House, consisting of 4 women and 4 male drummers next to the members of Iran’s Lian group including Mohsen Sharifian, Hamid Akbari, Morteza Azizadeh and Homayoun Nasiri were the artists who performed at the concert.

According to a Farsi report by the Honar Online news agency, the program began with the performance of Chinese musicians, while their special costumes attracted much attention.

The musicians were hitting on their drums hard, and it made their performance more attractive to viewers.

Drums have a special place in reflecting the customs of China, and what has been used throughout the history to boost the soldier’s morale, or in celebrations and ritual ceremonies, is now playing an important role in Chinese music culture.

After that, Lian band took the stage to accompany the Chinese musicians. Mohsen Sharifian played bagpipes and the percussionists accompanied him.

Then the Chinese performers left the stage, and in the next section three Iranian musicians played music from southern Iran.

While playing a Kurdish piece with bagpipes, Sharifian called on the audience to keep providing assistance to the quake-stricken people of Kermanshah.

He also said that he is very happy that this event has created a cultural dialogue between the two countries that have a very ancient history.

He also dedicated a piece to the missing Iranian seafarers on the burning oil tanker in China waters. For this part, the Chinese drummers returned to the stage again to accompany the Iranian musicians.

30 Iranian seafarers and two Bangladeshi crew members were on board an Iranian oil tanker which a few days ago collided with a bulk freighter in Eastern China. Efforts are underway to find the missing sailors; however, the huge explosions in the ship have minimized the chance of finding them alive.