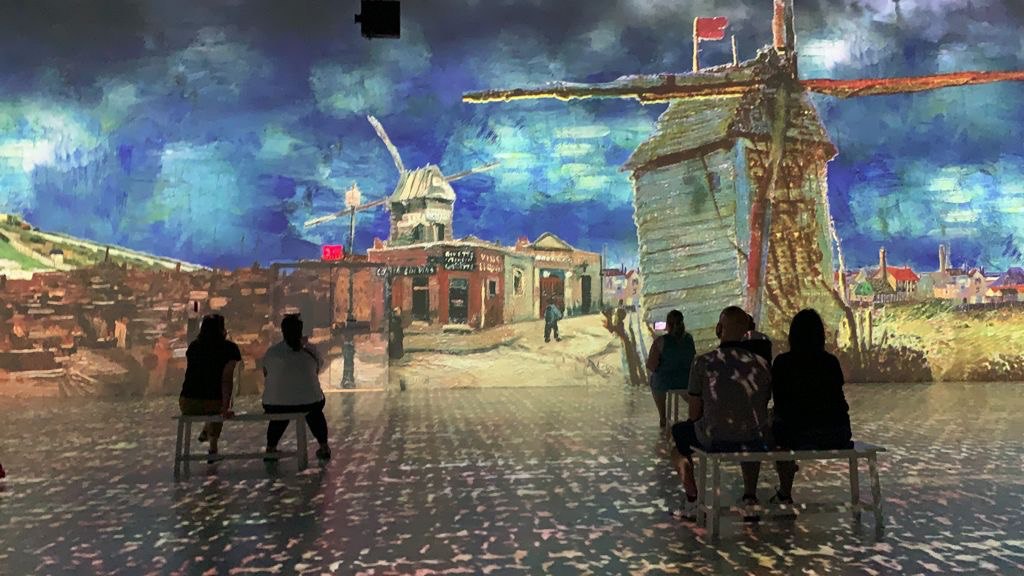 The city of New York is hosting an immersive exhibition of art on the banks of the East River, projecting the masterpieces of the great post-impressionist artist Vincent Van Gogh.

The city of New York is hosting an immersive exhibition of art on the banks of the East River, projecting the masterpieces of the great post-impressionist artist Vincent Van Gogh. A one-of-a-kind exhibition, this innovative display of art aims to project, rather than display the artworks of the Dutch master in an engaging and spellbinding manner, allowing the viewer a better insight into the life and legacy of one of the artworld’s most prolific characters. Here is my account of the experience.

As of most of history’s greatest talents, the roots for Van Gogh’s immaculate competence have also stemmed from deep suffering. He had received much pain from the world. What earned my admiration for his character, however, was the way in which he converted his lamentation into ever-lasting, tangible, beauty – the beauty of existence.

Secrets of the Universe lie hidden in every brushstroke, and a touch of raw emotion bestows images that enlighten the mind.

In fact, exposing the secrets of existence was Van Gogh’s purpose. What appears as an adept profession in his field of art, is in fact an embodiment of a complex set of clues, hinting to the secretes that only he would uncover. Much like a child, his art was innocent yet curious, attracting one’s eyes as well as intriguing the mind. In his artworks, he wept and hurt. He cried without knowing the reason. A reason, however, which we can now identify as loneliness – a desperate yearning for a companion.

His works also encompass an array of many different artistic techniques, appearing to the viewer as a harmonic symphony – a metaphor for existence. The colors, each contributing to this orchestra appear with purpose and perfection – the color yellow, like a violin, the color red, like a cello, and blue, the piano. His legacy lives as long as the eyes of the viewer hover and discover the perfectly placed touches of a paintbrush, and take in this exquisitely conducted symphony as it guides the soul through the troubles, regrets, and aspirations of a man full of heart and soul, communicating his thoughts through the cries of centuries.

The exhibit first takes one to Insects In the Dark, a place of suspenseful and tense air.

This is however what Van Gogh was most surrounded by, making everything else invisible, but their noises loud and clear. The journey then stops at the beautiful, bright, and graceful yellow of the sunflowers which took me by surprise, and woke me up like rays of sunlight in the morning embrace one, refreshing the soul after the long darkness of sleep – just as the darkness of the insects.

A rain of colors pours down afterward, raining down from Van Gogh’s paintbrush, flowing into a sea of colors. Enhanced by the chilled music in the background, the paintings catch the eye by an exquisite ensemble taking the viewers past Van Gogh’s first works. Evident in his initial paintings, however,  is the fact that the Van Gogh that we admire today had not yet discovered his unique style in those early years. In contrast, his initial artworks seemed normal, generic even, as if forced by the preferences of customers in his time, and reminiscent of today’s art, mostly with ith the sole aim of selling better.

Then we see the steam and a lamp. The steam before the birth of the fire within him.

The coming of Vincent’s style and taste. The sun rises and with it his style and vision. His earliest and best works of nature, the Cornfields with his signature brushstrokes.

Vincent Van Gogh was finally born, as the sun sets in the exhibition and brings with it cloud, storm, and rain. The windmills start to move.

Vincent Van Gogh still carried hope and ambition through the dark, stormy days.  He colors the sky with his hope. His ambition makes the clouds disappear and return the white clouds of peace, leading to his portraits in the Parisian Cafe du Tambourin.

Suddenly, Siccardi takes us to Eastern Asia, amid the tall bamboo trees which are slowly revealed to us by the warm sun. The Momo Sakura flowers, escape the wind and slowly return to their trees. His love of Japanese art is expressed in this section, as we are also met with Pere Tanguy.

We approach the darkroom of Vincent where he recovered from the darkness within. He brought out the colors inside him, so much so, that he could no longer recall the darkness that had once engulfed his existence.

We pass the cornfields once again. He then works on flowers, experiments with new colors, but still returning to his favorites. We sink into the crimson of Cafe du Gare which triggers the rage inside. Loneliness aches his, as well as the viewer’s hearts in this section, as we witness Van Goghs’s lonely nights in the cafes and restaurants (of Paris?), as he sits alone and lonely, watching everyone enjoy a meal with their companion.

However, the viewer senses here that Vincent was indeed not alone, as his eternal companion was always with him. His art and his vision, the only light in his life, lighting up the dim walls of Cafe du Gare with a tender yellow. He draws roots and plants as if he could see the water flow within them. We see them grow to become more beautiful day by day, blossoming on top of each other.