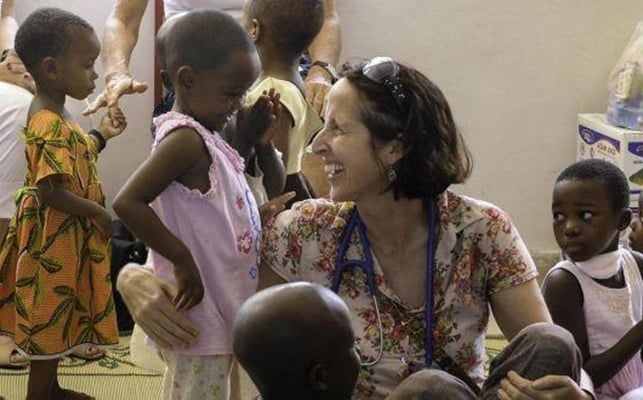 Irish paediatric oncologist Trish Scanlan says the new sanctions imposed by the US president on Iran imperil a treatment plan for Tanzanian children.

Dr Trish Scanlan was in unfamiliar surroundings when she broke down and cried some weeks ago.

Sitting with the chief of paediatric oncology in the Mahak hospital in Tehran, the capital of Iran, she became overwhelmed when she found what she had spent more than a decade travelling the world in search of.

Scanlan works with children suffering from cancer in Dar es Salaam, Tanzania. In her 11 years there, she has failed to save a single child suffering from a particularly aggressive form of cancer called acute myeloid leukemia (AML), which affects the blood and bone marrow.

Dozens of children are diagnosed with the condition each year, and the treatment is both toxic and expensive. The hospitals in Tanzania are simply not equipped for the job.

“We don’t have enough blood products, platelets and other support care to get the children through the treatment because it’s basically like hitting them over the head with a sledgehammer, and doing that at least four times,” Scanlan says, as reported by The Irish Times.

“We get through one, two or even sometimes three of these courses, and they usually die of fever, sepsis, or want of blood. We’ve never managed to cure a child. They all died, which is really sad because Crumlin for example would probably save about 60 per cent.”

Loads of countries and hospitals help us but it was beyond their ability to provide support for 30-40 children. It’s a lot of cash,” she added.

“I had tried and tried and tried. I had been all over Europe, America, South Africa and India, but I had never been able to access a hospital that was willing and able to support these kids.”

On edge
A few weeks ago, Scanlan flew to Tehran. As she landed, she was on edge. “When you arrive in somewhere like Iran – the ‘axis of evil’ – you wonder what people going to be like,” she says. “I thought I was going to a closed, suspicious sort of place.”

But, as she made her way through the airport, queuing for visas and collecting baggage, she found “entirely the opposite” was the case.

“People were offering me cakes and tea,” she says. “I’ve never been to a place where the people were doing everything in their power to make each situation as pleasurable and friendly as possible.”

During her stay, Scanlan visited Mahak hospital, an independent organisation supporting children with cancer, funded entirely through charitable donations. The idea was to go and see how they do things, and hopefully learn something to take back to Tanzania.

“Everywhere we went people knew about Mahak,” she says. “It provides all the cancer services for Iran. They will pay for children’s cancer care in any hospital in the country. You send them the bill and they pay it. If the children survive, they pay for all of their schooling up to and including university. I can’t tell you how unbelievable they are.”

Following her tour of the hospital and meetings with department heads, Scanlan asked whether she could give a presentation of her work in Tanzania. They agreed, and she told them all about the children suffering and dying from AML.

“When I’d finished, we all sat down and they asked what they could do to help,” she says. “I asked was there any way they could take the AML kids, and they just said: ‘Sure. No problem. No charge.’

“They asked could we afford to transport them and I said we’d find a way. If we could get the kids to the door of the hospital, they would take care of them after that. I started to cry. I’ve been looking for an answer to this for 10 years, so it was pretty insane.”

Sanctions
The very next day though, everything changed. US president Donald Trump withdrew from the Iran nuclear deal, re-imposing sanctions on the Persian Gulf state. “The price of things – simple commodities – went up overnight by as much as 50 per cent,” says Scanlan.

“A run on the banks had closed foreign exchange. Naively I thought the sanctions wouldn’t affect the hospital or the work of the charity where they don’t apply, but they do apply to the money it uses to pay for everything.”

“From one day to the next after that, people were glued to the television screen or radio. They were waiting for the next announcement. It wasn’t a small deal what happened. They were holding their breath, waiting for how it was going to affect them.”

The following night, Scanlan had dinner with the two women who set up Mahak. “These were jolly, fun, really dynamic women,” she says. “Both of them were like: ‘We think war is coming.’ These were not histrionic, dramatic women.”

“Both of them had set this up 27 years ago in the middle of sanctions. These weren’t women to flip. They said the offer was still there but that we needed to think very carefully about bringing children to a potential warzone.”

Despite the change in the landscape, Scanlan is determined to press on. “We’re going forward with the idea, but we’re on tenterhooks because we certainly don’t want a child to go and be at risk,” she says.

“I don’t know what the future holds. But I know that in recent weeks, a hospital in Iran, funded by ordinary Iranians, offered to help children with cancer in Tanzania. In times full of threats, this was a promise of humanity.”