Change in tactic or strategy? 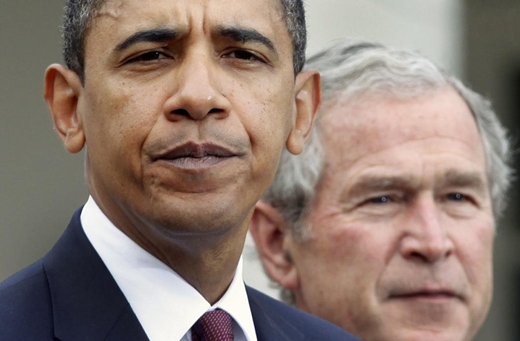 It is wishful thinking to assume that diplomacy can achieve what used to be achieved through war machine; real change is needed.

Will the future bear out President Obama’s prediction that failure to clinch an agreement with Iran may result in the isolation of the US among its friends and European allies?

Did President Obama’s warning, which came in response to opponents at home of a nuclear deal with Tehran, emanate from the understanding that days of hegemonic excessiveness and recourse to intimidation and threats are over? Or from appreciating the fact that solutions to modern-day problems lie in nothing but wise diplomacy the core principle of which is respect in practice for the rights of others?

On the world stage, such diplomacy requires national interests to be defined in relation to the collective interests of the international community to make sure that they are advanced through mutual respect and constructive interaction with other nations across the world.

Barack Obama ran on a platform of change. His choice of the campaign slogan can be construed as understanding the need for change in Washington’s strategic policies to make America more compatible with the rest of the international community.

George W. Bush was unwilling to come to terms with the fact that the world has undergone change. So, he tried to advance his objectives with the help of the Pentagon and his NATO allies. He cherished a new world order to be policed by the US.

He had realized that power equations on the world stage were metamorphosing, but he failed to appreciate the fact that he was not the only one in charge of managing the world. Nor did he realize that the era of the US and its traditional ally Britain establishing all-too-obedient rules in other countries was gone.

His Hollywood-style scenario featured redrawing the world map – expanding some countries and contracting others – similar to what a sovereign government might do to its provinces, for one reason or another.

His failure was not the result of wrong tactics. In fact, it was an irreparable strategic blunder by Washington to believe that through a change in tactic and replacement of “war” with “diplomacy”, it could achieve an unattainable objective.

By the same token, President Obama seems to have failed to reach a thorough understanding of his campaign slogan: Change. Although he is a Democrat, he too seems to have been fixated on fulfilling the dreams of neocons through a change of tactics.

Perhaps, he knows that what America needs more than a change in tactics is the revision of its strategies. But, in a battle that pits realism against wishful thinking, realists seem to have to withdraw from the race in favor of dreamers.

America is pregnant with fundamental change in its interpretation of “power” and “international relations” in today’s world, but President Obama does not seem to be a seasoned and determined enough midwife to deliver the baby. Or maybe, time is not ripe for America to experience labor pains, and this baby cannot be prematurely delivered through cesarean section, especially by an African-American jurist, and not a Caucasian politician.

It would be a big mistake for American foreign policy strategists to assume that a change in tactics could do damage control and help restore their country’s past glory.

Also, it would be miscalculation on their part if they thought the tarnished image of America could be repaired through withdrawing US troops from Afghanistan and Iraq, replacing military action [which is still on the table] with diplomacy to settle the nuclear dispute with Iran, not sending forces to Syria or occasionally holding the radical Israeli government in check.

What the US needs is fundamental change in its approach to the world and its nations, a question which has yet to be addressed even on a national level. So there is no wonder that signs of practical change in America’s international relations are nowhere to be seen.

It is astonishing that the US, which has cutting-edge communication technology and has provided the world with the infrastructure needed for a borderless globe, does not have brave politicians to dismantle Medieval feudalism, modern-day slavery and colonialism.

It’s a great pity that instead of being used to reach understanding and coexistence among nations and securing synergy and enhancing living standards, dialog is being used on a mission of coercion which used to be accomplished through the use of artillery, tanks, snipers and fighter jets. One must keep in mind that introduction of change in approaches won’t necessarily be successful.

Nuclear negotiations between Iran and P5+1 are – I don’t want to use the past tense of the verb: were – one of the most remarkable opportunities which can possibly land world rulers on the path to alignment with nations; nations which think of a better future and are brought together thanks to modern communications.

They have either undergone change or realized the need for change. Undoubtedly, people of the world, particularly the elite and scholars, will not take kindly to any impediments to this inevitable fate of human society, whether the hurdle presents itself in the form of Zionist extremism and Daeshism [the extremist ideology of IS], or ignorance at the negotiating table.

It seems that among nuclear negotiators, Europeans are better prepared to hear out the message of “change”, but symptoms of congenital inability to appreciate it can be clearly seen among US congressmen and statesmen.

The Iranian government and nation still hope that following two years of intensive talks in Geneva, Vienna, and Lausanne which finally produced a statement, the Europeans will play by the book. In fact, they have enough reasons to think of the interests of their own countries as members of an independent union.

US hardliners should take President Obama’s warning seriously that insistence on halting Iran’s nuclear program would be an illusion that could translate into “losing touch with reality”, if not outright alienation. They should accept the fact that this style of policy-making for a country which views itself as the world leader would be disastrous.

By electing President Rouhani almost two years ago, the Iranian nation told the world that it also thinks of change on a national and global scale, and is ready to honor its obligations and has paid a price for change already.

After what Iran went through when an adventurous government was in office, it is now saying it has reached some sort of national unity to strike harmony with the rest of the world through flexibility of its nuclear negotiators which has at times gone beyond expectations.

We want peace for everyone across the world regardless of their race and religion; we know peace and security are either for all or for no one. The approach that puts others first can be viewed as realistic self-love.

Now, we have adopted a wait-and-see approach to find out what good things will come out of moderation and termination of aggressive policies and adventurous rhetoric for us – read the entire world.

As Supreme Leader Ayatollah Khamenei, who made constructive interaction with the world possible through his support for the negotiating team, put it what comes out of two years of negotiations is the final act.

In other words, in Iran’s contemporary history, there are enough reasons for distrust in the West, particularly America. So Iranians won’t have to wait for assistance from the West to secure development. However, it is expedient, both for the world and Iran, to give a second chance to diplomacy so that the wisdom, good judgment, logic and commitment to law of veteran politicians can be assessed and their claims can be verified!