Carnage of 135 children; reprisal against the Pakistani army, Taliban-style 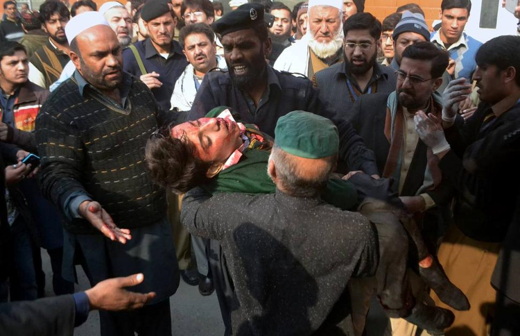 In a reprisal attack, Tehreek-e Taliban Pakistan have carried out their threat against the Pakistani army and slaughtered a large number of defenseless students in Peshawar.

On December 17, Farhikhtegan, a daily, dedicated its editorial to the mass slaughter, the day before, of defenseless Pakistani students at the hands of Taliban militants. What appears below is a partial translation of a report the daily published on the bloody incident and the editorial penned by Pir Mohammad Molazehi, an Indian Subcontinent expert:

The bloody attack launched by five Taliban insurgents on an army-run school in the northwestern Pakistani city of Peshawar left at least 135 dead, as many as 125 of them students.

The attack was apparently in response to a recent army offensive against leaders of the Taliban and al-Qaeda in which the Pakistani army killed Adnan Shokri Juma, a senior al-Qaida leader.

The Pakistani media reported that at the time of the attack, at least 500 people were inside the school. A few hours after Taliban militants stormed the school, the Pakistani army and police launched a rescue operation and released a group of students from captivity. During the operation, four Taliban fighters were killed.

Students at this school were reportedly all below 15 years of age (first to tenth graders).

“When our suicide bombers entered the school, they had instructions not to harm the children, but to target the army personnel,” said Taliban spokesman Muhammad Umar Khorasani.

Referring to an anti-Taliban military offensive that began in June, he said the school attack was a revenge attack for the army offensive in North Waziristan.

As for the reason why the Taliban have targeted the army-run school, he said that the Pakistani government targets Taliban families and women; Taliban sought to give them a taste of their own medicine.

The Pakistani army has announced that in a few operations carried out over the past few months, more than 1,000 militants have been killed in North Waziristan.

The army-run school which came under the deadly attack was in the northwestern city of Peshawar. The majority of students there were children of army staff and officials.

The vicious circle of massacre

This gains more weight in Peshawar, northwest Pakistan, which is one of the most militarized administrative centers in the country where the military has a heavy presence. In the eyes of the Taliban, any blow to the city’s security can challenge the military’s efforts to maintain law and order there.

In fact, the Taliban have massacred students in a military-run school to target the credibility of the Pakistani military. The Taliban do not care about the fact that their attack on a school could trigger condemnations in the court of public opinion; for them what matters is to cause public panic and wreak terror havoc on people. What they do signals the following message to civilians and military men alike: attacks by the military in North Waziristan will not go unanswered.

It should be noted that the Tehreek-e Taliban have been currently hit by a lack of integrity and torn into smaller groups. Although these splinter groups think they are entitled to the Taliban title, some of them hold more extremist views and have stronger motivations to counter the Pakistani military and security forces.

The Mullah Fazlullah group is one of the most extremist groups of the TTP which has so far carried out and claimed responsibility for several suicide operations [in Pakistan].

Mullah Fazlullah once declared a caliphate in Swat Valley, but the military’s attacks forced the self-styled caliph out of the valley. He is said to be moving back and forth in border areas of Pakistan and neighboring Afghanistan, trying to get his forces to large cities and thus spread the security conflict which is raging on between the military and the TTP in North Waziristan tribal areas.

By staging the December 16 attack on the school in Peshawar Tehreek-e Taliban made good on the threats they had previously issued. They had warned the Pakistani government and military that the extended attacks – which they say are launched in coordination with the US – fail to prevent the TTP from advancing their objectives: Islamization of power in Islamabad.

Apart from this, the newly emerged extremism in South Asia is the product of flawed policies and superficial perceptions the Pakistan military has ironically tried to improve.

However, Pakistan’s military generals believe that the Jihadists who used to fight against the Red Army of the former Soviet Union in Afghanistan and were supported [by the government] were naturally different from the extremist fighters that are now called terrorists and pose a threat to Pakistan’s national security.

Moreover, there are some experts who blame the erroneous policies of the past and present for the growing spread of religious extremism, something which is still growing as a result of the reoccupation of Afghanistan by the US and NATO. These extremist groups which have emerged in the form of the Islamic State of Iraq and the Levant (ISIL) have jeopardized the security of both South Asia and the Middle East region.