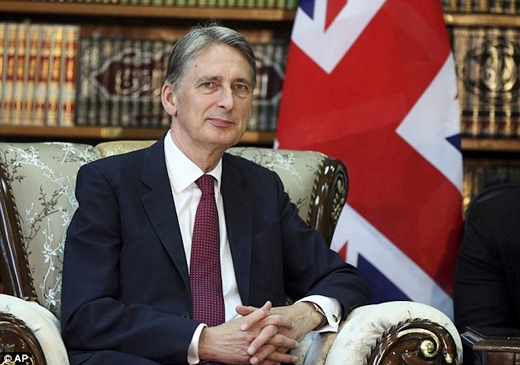 What impressed me most during this visit was the hospitality of the Iranians, and their bravery in testing the new waters, said the British foreign secretary in the opinion piece.

Foreign Secretary Philip Hammond, who visited Iran over the weekend to reopen the British embassy in Tehran, had an opinion piece published in Farsi in Iran newspaper on Tuesday (August 25).

The following is the translation of the piece from its Farsi version:

I arrived in Tehran this week and became the first British foreign secretary to visit Iran in over a decade.

A few weeks ago, I met with Iranian Foreign Minister Mohammad Javad Zarif and our counterparts from P5+1 in Vienna. Back then the world waited with bated breath to see whether our marathon talks would produce a nuclear deal.

We did clinch an agreement. The nuclear deal was a historic victory for diplomacy and a breakthrough for all parties to the talks. The implementation of this deal would assure the world of the purely peaceful nature of Iran’s nuclear program and would provide Iran with an opportunity to transform its ties with Western countries.

I am determined to turn the conclusion of nuclear talks into a new chapter in relations between my country and Iran; relations which are beneficial to the people of Iran and Britain. A high-ranking delegation of British trade and economic managers accompanied me on my Iran visit during which I reopened the British embassy in Tehran.

Ties between Iran and Britain have a long, complicated and often difficult history. I don’t expect problems to be solved overnight. But, today we face many common challenges such as the emergence of IS in Iraq and Syria, instability in Afghanistan, the drugs trade, and climate change.

I believe if we create an atmosphere of trust and confidence, we can improve things. That is what we did during the nuclear talks. I am willing to repeat that through diplomacy and the assistance of the two countries’ embassies.

One way to build trust goes through facilitation of relations between the two peoples: between universities, businesspeople, scientists, artists and families. Many Iranians live in Britain. Many of them have a big share of efforts to serve British society.

I am fully aware of the problems associated with getting a British visa, including the need to travel to Turkey or the UAE. The scope of the British embassy activity will be limited at first. So the Tehran mission won’t start issuing visas immediately after its reopening. But, resumption of visa services in Tehran is a priority and we hope we can resume that service within months.

I don’t expect our tries with Iran to remain free of ups and downs forever, but I am optimistic about the future. The ancient history and cultural richness of the Iranian nation is well known. What impressed me most during this visit was the hospitality of the Iranians, and their bravery in testing the new waters.

We will focus, in equal measure, on the challenges and opportunities that lie ahead as we carry on with efforts to create mutual understanding and respect, especially through diplomacy and later on through trade and commerce, to serve the interests of both nations.