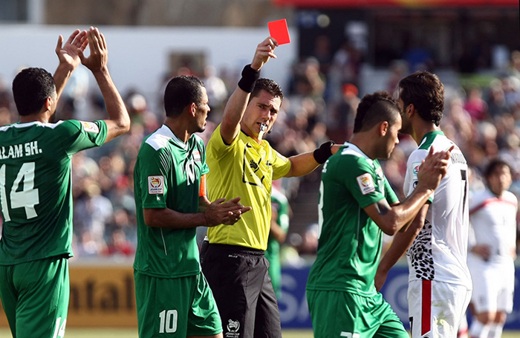 Iran lost to Iraq in the AFC Asian Cup quarter-finals on penalties, failing to break a 39-year drought after winning three successive tournaments from 1968 to 1976.

The 10-man Iran were overpowered by Iraq on penalties, failing to reach the semi-finals of the Asian Cup after the two West Asian rivals played out one of the most extraordinary matches in the tournament’s history.

Iran lined up against Iraq on Friday (January 23) in Canberra in the 2015 AFC Asian Cup quarter-final and were beaten by the Iraqi side in penalty shootouts.

The marathon match between the two regional giants ended in a three-all draw after the extra time, with the West Asian rivals awaiting their fate to be sealed in penalty kicks.

Iraq had the luck on its side during the shootouts. Both teams missed the first penalty. Iran also missed the 8th kick by hitting the post, thus creating an opening for Iraq which scored a goal and booked a place in the semi-finals.

On Monday, Iran beat the UAE 1-0 in their final Group C game, booking a spot in the Asian Cup quarterfinals.

Iraq defeated Palestine 2-0 in their final match of Group D on Tuesday night to stand second after Japan and book a quarterfinal clash with Iran.

Iraq – which hoisted the trophy aloft in 2007 – will play South Korea which beat Uzbekistan through two goals in the extra time on Thursday, becoming the first team to advance into the Asian Cup semifinals.

Iran have fallen well short of their most successful era when they won three successive tournaments from 1968 to 1976.

Iran and Iraq have played 25 times against each other (Friday’s match included), with Iran winning 14 times, Iraq taking five victories and six matches ending in a draw.

On January 4, Iran defeated Iraq 1-0 in a friendly in Sydney as a lead-up to the Asian Cup.