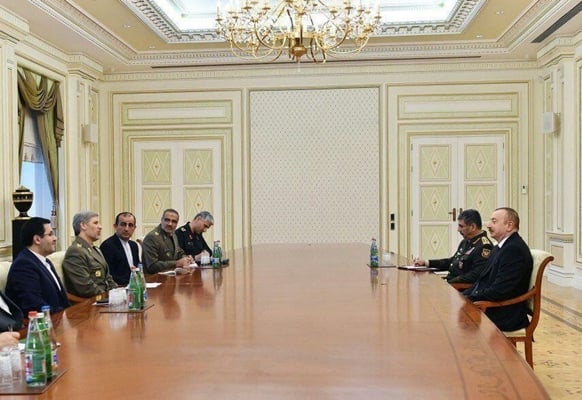 Speaking in a Wednesday meeting with Iranian Defence Minister Brigadier General Amir Hatami, Aliyev said he is pleased to see bonds of friendship between the two countries being strengthened, adding that Tehran-Baku partnership could act as a model for the region.

Stressing the need for greater unity among regional states in the face of common threats, the Azeri president said interventions by outside powers and external support for terrorist outfits and separatist movements are biggest dangers to the region, IRIB news agency said in a Farsi report.

Aliyev hailed successful development of the friendly and brotherly relations between Azerbaijan and Iran in different areas, including military and military-technical fields.

Emphasizing regular high-level reciprocal visits, President Aliyev described the fact that the Azerbaijani and Iranian presidents have held nearly 10 meetings in recent years as a sign of high-level relations between the two countries.

He referred to his last visit to the Islamic Republic of Iran, saying he had fruitful discussions with the Leader and President of the country.

President Aliyev expressed his confidence that Hatami’s visit would create a good opportunity to discuss the current state and prospects of Azerbaijan-Iran cooperation in military and military-technical areas.

For his part, Hatami said his trip to Azerbaijan, which follows the formation of Iran-Azerbaijan Joint Defence Commission, shows the two governments are willing to work towards closer relations and compensate for the past shortcomings in the development of bilateral cooperation.

The joint commission the defence minister was referring to held its first meeting late October in Baku, in which senior defence officials from the two countries explored ways of boosting defence cooperation.

Hatami said the Iranian government is ready to transfer its anti-terror experience to Baku, responding to concerns that terrorist outfits who have been operating in Syria and Iraq so far could target other countries of the region as calm is returning to the two countries.

General Hatami arrived in Baku earlier in the day, heading a high-ranking delegation, and plans to hold talks with senior Azeri officials during his two-day stay.