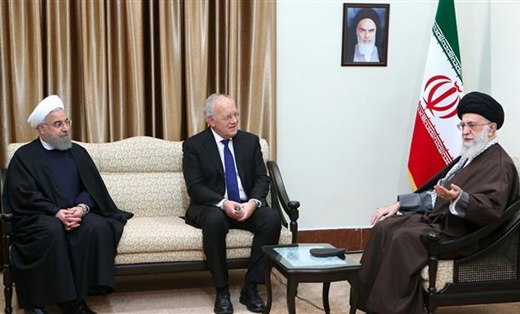 Leader of the Islamic Revolution Ayatollah Seyyed Ali Khamenei has urged greater Swiss investment in Iran, describing the volume of trade between Tehran and Bern as “small and uneven.”

Ayatollah Khamenei made the remarks during a meeting with Swiss President Johann Schneider-Ammann in Tehran on Saturday. Iranian President Hassan Rouhani also attended the meeting.

The Leader said the Iranian public have a positive impression of the Swiss government and welcomed an increase in economic and scientific cooperation between Iran and Switzerland.

“The volume of trade exchanges between Iran and Switzerland is small and uneven and Swiss tradespeople and investors can improve on this status by becoming aware of Iran’s plentiful capacities,” Ayatollah Khamenei pointed out.

The Leader cited the lack of any negative record of Bern colluding with some Western countries in their policies of pressure and sanctions against Iran as a good cultural grounds for strengthening bilateral cooperation.

“We have always regarded Switzerland as a hub of peace, friendship and cooperation, but some European countries are not like this and their interests are [served] through warmongering [policies] and the creation of divisions,” Ayatollah Khamenei stated.

The Leader added that the Iranian people have been affected by the warmongering policies of some European countries such as the provision of European missiles and fighter jets to former Iraqi dictator Saddam Hussein during his 1980-1988 war on Iran.

“Such an attitude has resulted in the creation of a negative impact in the mind of our nation but there is no such a mindset in Iran about Switzerland,” the Leader said.

Ayatollah Khamenei emphasized that the Iranian government would give its full support and provide every legal guarantee about the enforcement of agreements between Tehran and Bern and urged the two countries to implement the deals with firmness.

The Swiss president, for his part, said Tehran and Bern enjoy deep-rooted and cordial relations.

He added that a roadmap, which has been envisaged during his earlier talks with President Rouhani, can help improve mutual relations.

Schneider-Ammann said his country needs to cooperate with Iran to help settle major challenges across the world, including in many European countries.

Heading a high-ranking politico-economic delegation, Schneider-Ammann arrived in Tehran on Friday. Earlier on Saturday, he held talks and attended a joint press conference with his Iranian counterpart and also met with Chairman of Iran’s Expediency Council Ayatollah Akbar Hashemi Rafsanjani.