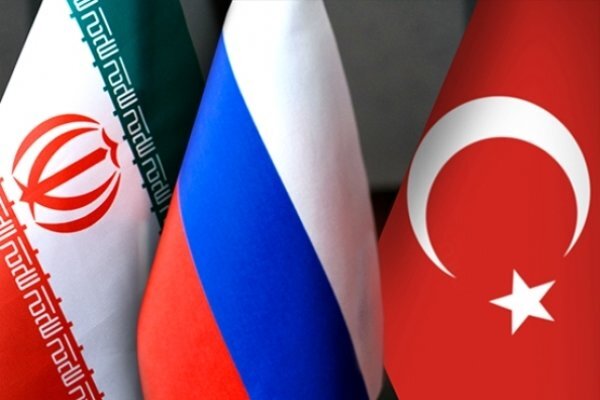 The Ministers of Foreign Affairs of the Islamic Republic of Iran, the Russian Federation and the Republic of Turkey –the three guarantors of the Astana format- have held a trilateral meeting via video conference on Wednesday to discuss Syria peace efforts.

The Foreign Ministers of the three guarantors of the Astana peace process (Iran, Turkey, and Russia) held a trilateral meeting via tele-conference on Wednesday, April 22.

In the meeting, held to discuss the latest developments in Syria and the region, Mohammad Javad Zarif, Mevlut Cavusoglu, and Sergei Lavrov talked about the latest developments, including the most recent situation in Idlib, Syria’s Constitutional Committee, the necessity for the removal of the unilateral sanctions, particularly given the outbreak of coronavirus, the humanitarian conditions, and the return of the displaced persons.

The Iranian, Turkish and Russian Foreign Ministers emphasized the need to continue holding consultations and coordination at the highest level among the three guarantors of the Astana format as the most important and effective process for the settlement of crisis in Syria.

The participants also had an agreement on the need to respect Syria’s independence, national sovereignty and territorial integrity, resolve the Syrian crisis politically, delineate between the terrorists and the opposition, and to keep up the fight against terrorism.

Iranian Foreign Minister Mohammad Javad Zarif, who has recently paid a visit to Syria to discuss the latest developments and hold consultations with the Syrian president and foreign minister, touched on the recent developments in Idlib during the trilateral meeting, and stressed the need for the expansion of state sovereignty over Syria’s territorial integrity and for the continued fight against terrorism.

Foreign Minister Zarif also pointed to his recent consultations with the United Nations Secretary-General’s Special Envoy for Syria Geir O. Pedersen, voiced support for his efforts to facilitate the Syrian-Syrian dialogue within the framework of the Constitutional Committee, and stressed the need for protecting the Committee’s independence and preventing foreign interference in the process of its activities.

The top Iranian diplomat also pointed to the far-reaching impacts of the coronavirus pandemic, slammed the unilateral sanctions as a serious obstacle to the battle with the virus, and reminded the international community and the United Nations about their responsibility to lift the sanctions, alleviate the suffering of Syrian people, and pay special attention to the status of the displaced persons at the refugee camps occupied by the US.

Zarif also described the efforts to expedite the return of the Syrian refugees and the international community’s push to provide humanitarian aids as a major step in the fulfillment of that goal and the restoration of hope and stability to the Syrian community.

The Iranian Foreign Minister also denounced the Zionist regime’s constant acts of aggression against Syria as a violation of Syria’s national sovereignty, saying they also threaten peace and stability in the region and contravene the international law.

The Iranian, Russian and Turkish Foreign Ministers finally emphasized the necessity of proceeding with trilateral consultations at all levels, including by holding the sixth Summit of Astana Process in the Islamic Republic of Iran after the normalization of situation created by the outbreak of coronavirus.