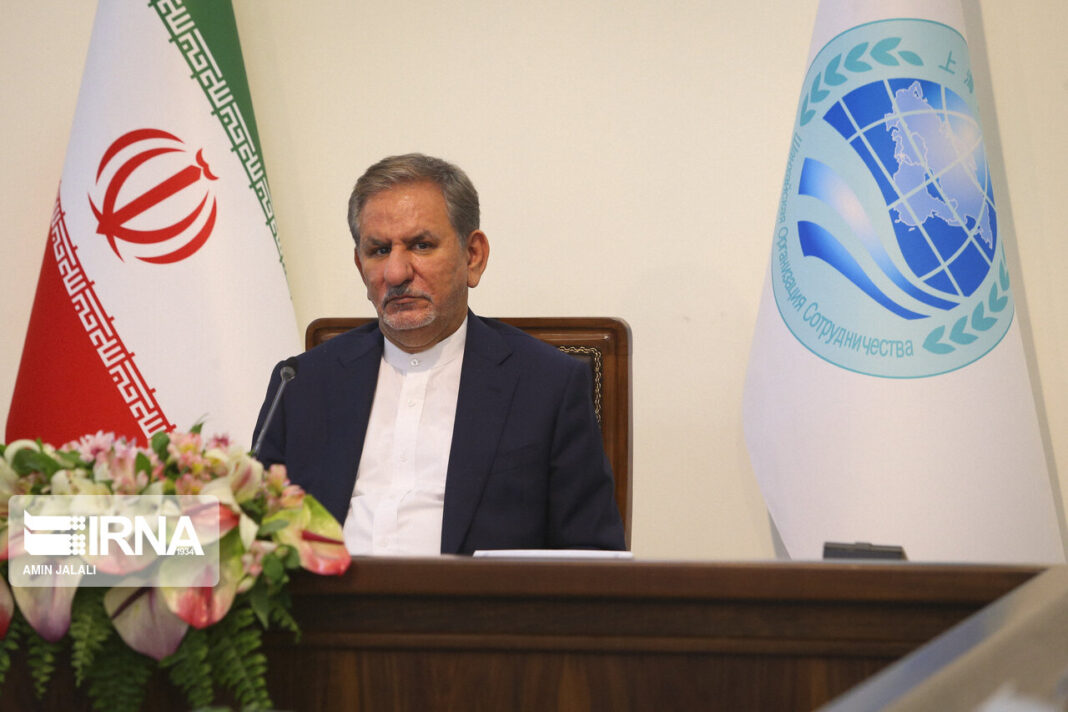 The Iranian First Vice-President made the remarks on Monday in an address to the 19th meeting of the Shanghai Cooperation Organisation’s (SCO) Council of Heads of Government, held via videoconference and hosted by India.

In his speech, Jahangiri said Iran has become a victim of state-sponsored terrorism despite its fruitful cooperation with other countries in the fight against terrorism, particularly its help for Iraq and Syria in combating Daesh (ISIS) terrorists that pose a major threat to the world.

The blatant examples of utilizing state-sponsored terrorism against Iran were the January assassination of Lt. General Qassem Soleimani by the US and the recent assassination attack on defense scientist and manager Mohsen Fakhrizadeh, Jahangiri added.

The vice-president then called on governments and regional and international organizations not to remain silent on state-sponsored terrorism and condemn it to prevent a recurrence of such inhumane measures.

“Iran, of course, will give a decisive and calculated response to this crime at the proper time,” Jahangiri added.

He further described regional organizations as one of the most effective mechanisms for the management and settlement of regional and global problems, saying the Shanghai Cooperation Organisation member states can take advantage of the ample opportunities and capacities for multilateral cooperation and play a major role in development and progress.

Jahangiri also deplored the serious challenges that the US government has posed to multilateralism, adding, “The JCPOA which is known as a major achievement of international diplomacy in the past decade, has been salvaged so far in spite of the Trump administration’s anti-JCPOA policy and illegal withdrawal (from the nuclear deal) and the imposition of cruel sanctions against our country and inaction from the European members, because of Iran’s peaceful policy and strategic patience and with the support from the international community, including the Shanghai Cooperation Organisation members, and of course with the great Iranian nation’s resistance.”

The Iranian vice-president then lashed out at the US government for resorting to illegal and cruel sanctions to pressurize the sovereign states that ultimately target the people, saying one of the instruments in Washington’s policy of sanctions is employment of banking mechanisms and dollar.

“Since the imposition of the unilateral American sanctions amounts to an action against free global trade and could be reused against any political or economic rival of that country (the US), it is necessary for the Shanghai Cooperation Organisation to devise appropriate plans to thwart such unlawful measures,” Jahangiri underlined.

The Iranian official then proposed the idea of developing interregional banking and monetary mechanisms to rid the regional sovereign states of the cruel sanctions and pave the way for interregional trade exchanges by using national currencies or creating a single common currency that would replace dollar.

He also suggested establishing a regional center for transit and transportation within the framework of the SCO to facilitate and promote economic cooperation.

Highlighting Iran’s strenuous efforts to tackle the coronavirus pandemic, Jahangiri said the Iranian nation is dealing with another dangerous virus simultaneously, namely the “cruel economic sanctions” imposed by the US.

The sanctions have impeded Iran’s access to pharmaceutical and medical products for the treatment of children, women and the elderly, the vice-president noted, adding that the Islamic Republic, however, has relied on domestic power to fulfill many medical demands.

Elsewhere in his speech, Jahangiri welcomed the establishment of peace in the Nagorno-Karabakh region, saying the Islamic Republic of Iran considers security and stability of the regional countries and neighbors as its own security.

Highlighting Iran’s historical commonalities and common border with the Republic of Azerbaijan and Armenia, the vice-president expressed Tehran’s readiness to employ its economic potential in the transportation and energy industries for the reconstruction of the war-stricken areas.

“Considering its special geographical, historical, cultural and economic position, the Islamic Republic of Iran, which connects various regions, including Central Asia, the Caucasus, West Asia, and the Middle East, and which is situated between the Caspian Sea in north and the Persian Gulf and the Sea of Oman in the South, is prepared as a rich energy hub and a linking expressway of the region to cooperate with the Shanghai Cooperation Organisation member states to pursue the common economic purposes, including the transfer and export of energy and transit of commodities,” he noted.

Highlighting the Iranian port city of Chabahar’s great capacities for a boom in the activities of the North-South Corridor, Jahangiri called for more focus on China-Pakistan Economic Corridor (CPEC) and the Chinese ‘One Belt One Road’ initiative.

Iran’s southeastern port of Chabahar and its railroad connection to Afghanistan and Central Asia are so important that Iran has begun the construction of a railroad linking Chabahar to Zahedan despite the illegal US sanctions, he concluded, inviting the SCO member states to participate in the mega-project.