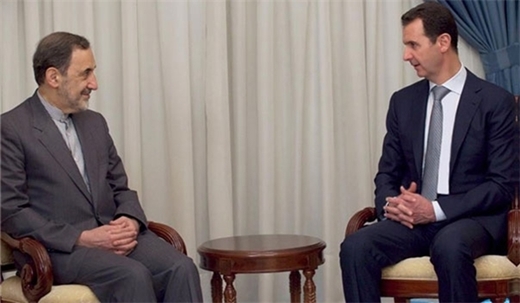 Dreams of some states for controlling the region, creating strife and even disintegrating certain countries will never come true, said Velayati in a meeting with the Syrian president.

Syrian President Bashar al-Assad appreciated Iran for its key role and assistance to Damascus in fighting the terrorist groups and supporting the resistance front.

“The axis of resistance has been formed in the region and no one can break it and we will, no doubt, be the winning side, and the support extended by Saudi Arabia, Turkey and some other countries to the terrorists has, thus far, failed to annihilate the resistance, and God willing, we will witness growing victories and of course, these victories were not possible without the Islamic Republic of Iran’s support,” Assad said in a meeting with Iranian Supreme Leader’s top adviser for international affairs Ali Akbar Velayati in Damascus on Tuesday.

He also named victory against terrorism, certain regional powers, divisive thoughts and extremist groups as instances of those cases where Iran and Syria have earned shared victory.

Velayati, for his part, appreciated Assad and his nation’s resistance against terrorist groups and enemies’ plots, and said Syria is now in a better situation and has grown more powerful compared with 4 years ago, when crisis started in the country.

He referred to the illusions that certain states pursue through training and sending terrorist groups to Syria, and said, “No doubt these actions will backfire on these countries, and their ominous illusions and dreams for controlling the region, creating strife and even disintegrating certain countries will never come true.”

Velayati stressed that Iran will remain beside the resistance front and the Syrian government and nation.