Armenian composer: I am glad I belong to the ranks of the insane 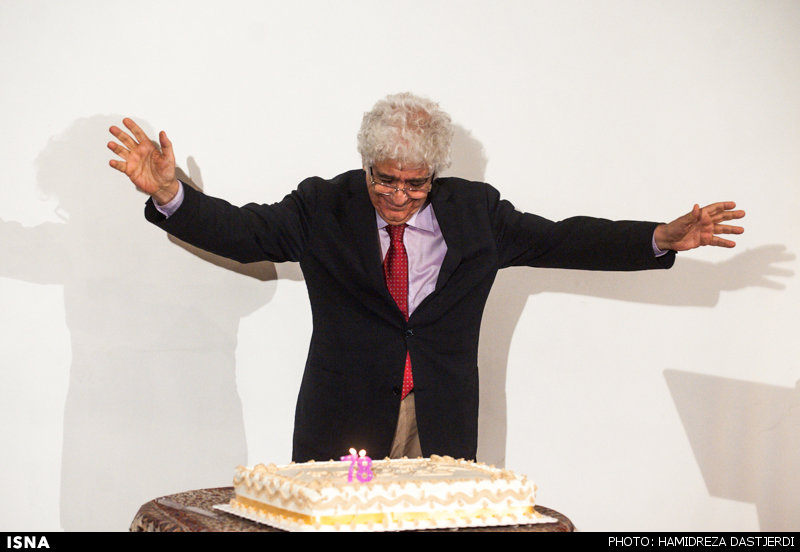 Armenian composer Loris Tjeknavorian says that he is an Iranian musician who has based his pieces on the Iranian traditional and religious music.

Loris Tjeknavorian (Cheknavarian), an Iranian Armenian composer and conductor, says art – and not the artist – is what people should take seriously.

The Iranian Students’ News Agency (ISNA) on October 12 published a report on Tjeknavorian and his remarks at his birthday party about his family background, works and favorites. The following is the translation of what he said:

“I grow younger each year. I’m [like] grapes which are not in their right mind and have yet to turn into wine. In insanity, you make progress. You cannot live in this world if you are not insane. I’m glad I belong to the ranks of the insane,” said Tjeknavorian at his 78th birthday party.

“I do not take myself seriously. What I do should remain in the world. My works should be serious. Your prayers are very much important to me. If I swim in an ocean, I will drown, but now I am swimming in an ocean of affection and I am with you. No one drowns in an ocean of love,” he added.

The Iranian conductor further said, “I have been often told that I am an Armenian. Some people separate us from the Iranians, but the fact is that we are all Iranians. Iran is not home to one single culture alone; rather, it is the place where [people from] different cultures have come together. Shah Abbas [the 5th Safavid king of Iran] and Fath Ali Shah [the second Qajar Shah] are to blame for ceding Armenia to the Russians. Back then millions of Armenians were massacred.

“During the Armenian massacre, my parents fled and I’m lucky that they fled to Iran. They returned to their homeland. Nowhere else better than Iran could I have been born,” he said.

The creator of The King Cyrus Symphonic Suite went on to say, “I was in love with music since childhood. Being mad, I used to do strange things. At 16, I formed an orchestra in the vocational school. I did what I did to the dislike of many people.”

He added, “I do not know much about the Iranian music, but I have based my work on Muharram’s musical rhythms. In fact, the music played as part of rituals at Zoorkhaneh [where heroic sports are practiced], in Muharram [the first month of the lunar year during which Shiites mourn the loss of Imam Hussein] and at the Armenian Church has always impressed me. I have composed my works building on these three sources.”

Tjeknavorian concluded, “Take my works, not me, seriously, because my works will survive me and will live on forever.”

Tjeknavorian then blew out his candles and cut his birthday cake.

Loris Tjeknavorian, the Iranian composer and conductor, was born in Borujerd on 13 October 1937 to immigrant Armenian parents. He is a prolific musician who has created and written more than 75 pieces among them: five symphonies; six operas; chamber music; concerti for piano, violin, guitar, cello and pipa (Chinese lute); ballet music; piano and vocal works; a requiem; an oratorio; as well as scores for over 45 documentary and feature films.
Tjeknavorian was the Principal Conductor and Artistic Director of the Armenian Philharmonic Orchestra (APO) in Yerevan, Armenia (1989-2000). For three successive years, from 1991 to 1993, he was with the APO which was the resident orchestra in Vienna performing benefit and charity programs.
› Subscribe
Share
Facebook
Twitter
ReddIt
Email
Print
Telegram
WhatsApp
VK
LINE
Viber