A letter found close to the scene of a blast outside the Israeli embassy in New Delhi cited the killings of Iranian anti-terror commander Qassem Soleimani and nuclear scientist Mohsen Fakhrizadeh, but the whole story seems to be a set-up aimed at framing the Islamic Republic, an Iranian analyst argues.

“This [explosion] is a trailer. We can end your life, anytime, anywhere,” the letter read, according to the Times of India.

A group that identified itself as “Jaysh ul-Hind” later claimed responsibility for the explosion, but the Israeli propaganda machine used the note found at the scene to blame Iran for the explosion, citing the Islamic Republic’s thirst for revenge especially after the assassination of Fakhrizadeh, which Tehran blames on Israel.

Tel Aviv has every right to be worried about Iran’s revenge, as Iranian officials have repeatedly vowed to retaliate, but blaming Tehran for the New Delhi incident is really ridiculous.

The incident took place at a time when the Indians have just implemented part of their commitments with regard to their deal with Iran for development of Chabahar port. After installing two heavy mobile harbour cranes of over 100 tonnes, India is to install two more cranes in the coming months. This will increase Chabahar’s capacity for loading and unloading cargos to 20 million tonnes.

This is especially important because the installation of the harbour cranes is considered a major step to develop the strategic Iranian port as per a deal between Iran, India, and Afghanistan.

On the other hand, the Iranian defence minister, Brigadier General Amir Hatami, was going to visit India upon the invitation of his Indian counterpart shortly after the Israeli embassy explosion. The visit was meant to boost the two countries’ defence collaborations to a new level, which is definitely unfavourable for a number of regional countries.

Therefore, the Indian officials need to be vigilant, and not be deceived by the fuss made by the enemies of Iran-India relations. The suspects of New Delhi explosion should not be searched for in the note found near the scene, but in other places where people are worried about the development of Iran-India economic and defence collaborations.

* Hossein Ahan is an Iranian expert in East Asia affairs 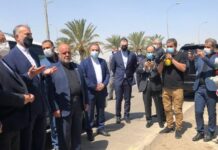