All Forces Mobilized as Floods Wreak Havoc on Northern Iran 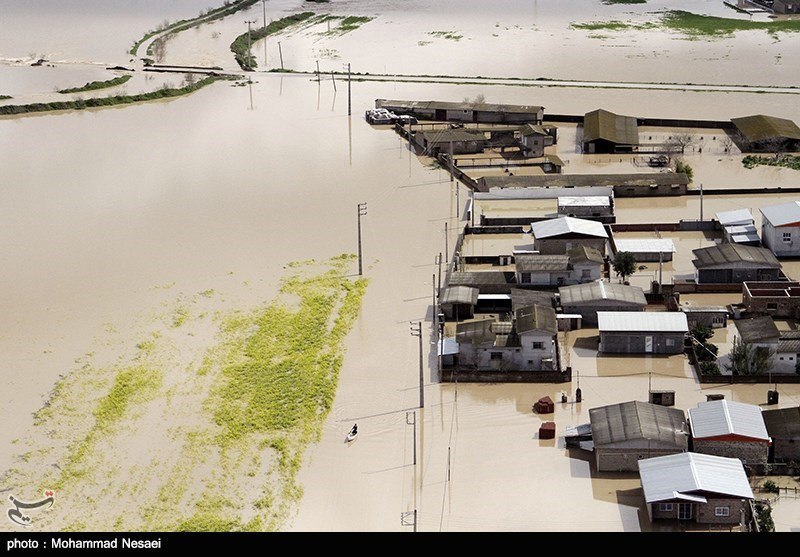 Iranian armed forces and civil bodies have been deployed in northern Iran as flash floods seriously affected people of Golestan and Mazandaran provinces, leaving behind casualties and making thousands displaced.

At least five people, including two children, have been killed in the floods during the past few days.

“Unfortunately, two children have lost their lives since floods hit Golestan [province]. As weather conditions improve, work will be expedited to dispatch aid to the flood-stricken areas in the province,” said a deputy provincial governor.

According to the Red Crescent Society, at least 6200 flood-stricken residents have been housed in emergency shelters so far. Water was emptied out of around 9,000 inundated houses, and 280 vehicles were pulled out of water as well. Five-thousand blankets and carpets have also been distributed among locals.

This comes as First Vice President Es’haqJahangiri accompanied by a number of ministers traveled to the flood-affected areas on Saturday to get a first-hand account of the situation there.

During his visit, Jahangiri fired Manaf Hashemi, the governor-general of Golestan province, who was out of the country when the floods hit, and has not yet shown up. Ali Gharavi, the deputy of Hashemi, was appointed as acting governor-general.

Parliament Speaker Ali Larijani also travelled to flood-stricken areas to see for himself the situation on the ground.

Iranian Armed Forces, including the Islamic Revolution Guards Corps (IRGC), the army, the police, and the Basij voluntary forces, have also mobilized all their resources to send relief aid to flood-stricken areas.

Neighbouring provinces have mobilized their resources, too, to speed up relief efforts.

In the meantime, Leader of the Islamic Revolution Ayatollah Seyyed Ali Khamenei, in a message on Saturday night, expressed deep sorrow over the tragedy, urging people and public institutions to send aid to the affected areas.

The Leader also instructed Major General Mohammad Baqeri, the chairman of the General Staff of the Iranian Armed Forces, to mobilize more resources to expedite relief operations in flood-hit areas.

Following the Leader’s order, the top general instructed all armed forces to mobilize their resources and send as much aid and assistance as they can to help flood victims. He also dispatched his deputy Major General Ataollah Salehi to the flood-stricken areas heading a team of military top brass in order to ensure coordination among various military and state authorities during relief work.

The reservoirs behind Golestan 2 and Boustan dams in northern Iran overflew a few days ago, causing a local river to burst its banks and deluge all nearby towns and villages.