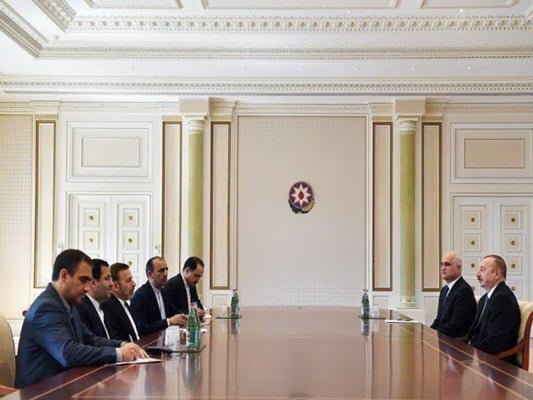 Azerbaijani President Ilham Aliyev has urged the speedy construction of a railway that connects the Iranian and Azeri cities of Astara to each other.

In a Monday meeting with Iranian President’s Chief of Staff Mahmoud Vaezi in Baku, Aliyev also called for the accelerated construction of the North-South Corridor.

According to Borna News, the two sides further exchanged views on a number of mutual and regional issues.

Vaezi, for his part, said the railway project must be completed as soon as possible.

He noted that the Iran-Azerbaijan bilateral relations are successfully developing in various spheres.

Vaezi added that the results of Iranian President Hassan Rouhani’s fruitful visit to Azerbaijan are obvious.

Upon his arrival in Azerbaijan, he said Iran and Azerbaijan are two neighbouring countries which are seeking to restore peace and security to the crisis-hit region.

He also said over the past five years, the presidents of Iran and Azerbaijan have met for at least five 12 times on a wide range of issues.

Vaezi described his visit to Azerbaijan as a good opportunity to brief the Azeri side on Iran’s stance towards the JCPOA following the US withdrawal from the nuclear deal back in May.

He then referred to the 12th Joint Economic Commission between Iran and Azerbaijan and said the commission provides the two sides with a good chance to further enhance their mutual relations.