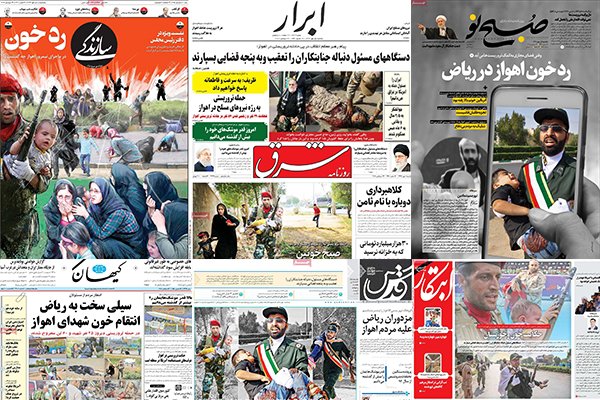 IFP has taken a look at the front pages of Iranian newspapers on Sunday, September 23, 2018, and picked headlines from 18 of them. IFP has simply translated the headlines and does not vouch for their accuracy.

All papers today covered the tragic terrorist attack on a military parade in Ahvaz, south-west of Iran, which claimed the lives of 25 and wounded over 60 others.

Several papers also criticized the media coverage of the event by the London-based TV channels Iran International, which had a live interview with the spokesman of the Al-Ahwazi terrorist group, and the BBC Persian, which refused to call the attack a ‘terrorist’ one. 2- Rouhani: We Now Value Our Missiles More than Ever: Rouhani

1- We Sacrifice Our Lives for Iran: A Report on Reactions to Ahvaz Terror Attack

2- Iran Leader Urges Officials to Find Criminals, Have Them Punished

3- Rouhani: End of Economic War with US to Be Happier than End of Iran-Iraq War 2- Iranian Armed Forces Display Their Prowess across the Country 1- People Admire Armed Forces for Sacrificing Their Lives to Save Women, Children

1- What Happened in Bloody Noon of Ahvaz 1- Traces of Ahvaz Attack in Riyadh: When Cyberspace Comes to Terrorists’ Help 1- Crime of Shahrivar: Terrorists Sponsored by Saudi, US Kill 25, Wound 60