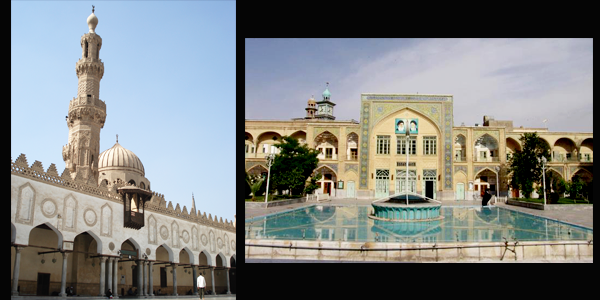 The head of the Islamic Madhahib University has said that cooperation among Qom and Najaf seminaries with Al-Azhar will deliver a blow to religious prejudice and violence.

Imam of Al-Azhar Ahmed el-Tayeb has said that senior Sunni and Shiite clerics should issue religious edicts banning the killing of all Muslims.

Ahmed el-Tayeb [stressed that his call was aimed at “burying sectarian strife” and halting the “bloodbath” that is gripping the region and] said that such fatwas will help build a culture of coexistence and peace between members of two Muslim denominations.

His call for a joint meeting this year comes after Al-Azhar held an International Counterterrorism Conference in December. From Iran, Chancellor of the Islamic Madhahib [Faiths] University Ahmad Moballeghi took part and delivered a speech in the conference.

In reaction to a call by the Al-Azhar Islamic Center for holding a joint meeting of Sunni and Shiite scholars later this year, Moballeghi told reporters that the way to keep prejudice and religious extremism at bay goes through the kind of dialogue which leads to fatwas that protect the Muslim community.

The following is the translation of an excerpt of his comments published by Tasnim News Agency on August 1:

Remaining in limbo, that is to say failing to issue religious edicts or issuing toothless edicts, amounts to washing opportunities down the drain and giving the enemies of Islam an edge, he said, adding, “Such failures by Islamic scholars will only serve the interests of prejudiced groups like ISIS which go out of their way to tarnish the reputation of the Muslim community and make Shiite-Sunni relations tense. We need to act before it gets too late.”

He hailed as a great opportunity a recent invitation extended by Grand Sheikh of Al-Azhar to Shiite and Sunni scholars to come together and issue fatwas against extremism and the massacre of Muslims and said the call does have all the features to become a milestone for Muslims and Islamic relations.

The Iranian cleric further said the imam of Al-Azhar has long held views supporting calm in the ranks of Islamic nations, citing his invitation to Iranian clerics to attend the conference.

He said that unity among Shiites and Sunnis entails dialogue and agreement between the two in a bid to respect the red lines of each other, keep the atmosphere calm and turn up the heat on extremist Takfiris.

The university chancellor went on to say that the institution in charge of proximity* [among Islamic faiths] or any other organizations should go among the ranks of Muslims in the community, adding that to carry the message of proximity across, those involved should make their presence felt in Muslim societies, skillfully hold dialogue, let go of the details and reach a consensus on general themes which serve the interests of the Islamic community.

Moballeghi also said that the Supreme Leader of the Islamic Revolution and sources of emulation are fully aware of the importance of Muslim unity. He said the Supreme Leader’s fatwa on unity in the world of Islam and his praise for Al-Azhar’s stance played an effective role and improved the situation, adding that the current situation today necessitates another fatwa to be issued.

Al-Azhar and Qom Seminary School are not expected to see eye to eye on everything, but they can reach a consensus on the red lines, he said.

Dr. Moballeghi said the call for unity has been made by Al-Azhar, adding for years similar calls have been coming from Qom Seminary School, but what matters now is that the two take steps toward a joint objective.

He further said that the imam of Al-Azhar delivered an excellent speech on the need for unity and renunciation of violence in a conference in condemnation of Takfiri violence [last year], adding that we should not take a stance today which may dissuade Al-Azhar from the path it is now walking down.

Proximity refers to dialogue among Islamic sects and denominations focusing on common ground to achieve unity in the world of Islam.

[The late Ayatollah Seyyed Hossein Borujerdi held special views on bringing about proximity among different Islamic sects. Ayatollah Borujerdi was an advocate of unity and solidarity of the Islamic world and tried to create a kind of proximity among different Muslim sects. To that end, he corresponded with Dar ul-Taqrib (Center of Proximity) in Cairo and its founders. Ayatollah Borujerdi, was sensitive and averse towards sectarian divisiveness among Muslims, and tried his very best to prevent it. ]

[Sheikh Mahmoud Shaltut was a prominent Egyptian Sunni religious scholar and Islamic theologian best known for his work in Islamic reform. Sheikh Shaltut is remembered for encouraging harmonious interactions between the Sunnis and Shiites. He maintained close relations with prominent Shiite figures such as Seyyed Hossein Borujerdi and zealously campaigned for open discussion and cooperation between the two branches. Shaltut desperately wanted to overcome misconstructions and avoid quarrels between the two sects.]