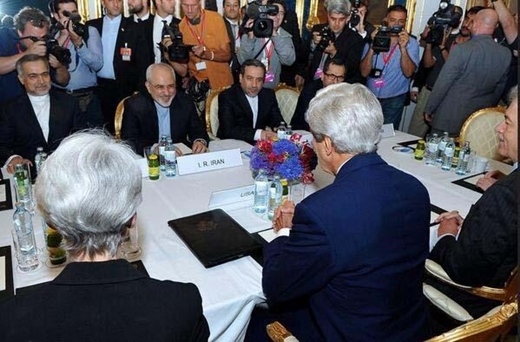 A former Iranian ambassador says that the negotiating team should draw on the Supreme Leader's praising remarks and hold their ground when it comes to the rightful stances of the Islamic Republic.

A former Iranian Foreign Ministry spokesman says that an honorable agreement is likely to be reached unless the Americans make miscalculations and upset the balance at the negotiating table in a way that makes a final deal elusive.

Hamidreza Asefi, who was also a former Iranian ambassador to Germany prior to the fall of the Berlin Wall and unification of Germany, made the comment in an interview with a TV news bulletin on the latest developments and future of nuclear talks and added that the country’s nuclear negotiating team, whose self-confidence has been boosted by the Supreme Leader’s praising remarks, should forget about the time limit in nuclear talks and stand their ground when it comes to the rightful stances of the Islamic Republic of Iran.

The following is the translation of excerpts from his remarks in the interview as reported by Khabaronline.ir on July 1:

Is it true that the other side needs an agreement more than Iran?

Yes, Messrs. Obama and Kerry as well as a US Deputy Assistant Secretary of State have made comments which show they believe Iran will not bow so they should reach an agreement with Iran. The Zionist regime is enraged, part of it is a sales presentation and the other part is that the regime is really vexed.

The Center for Security Studies (CSS), which is an international think tank in Zurich, has said that nuclear energy has been linked with national pride in Iran and that the Iranians are highly unlikely to let go of it. The country’s nuclear team should go ahead with the talks without paying attention to the war of words waged and pursued by the Americans, Zionists and Saudis.

A media blitz is in overdrive trying to sell this idea that Iran has to give up its red lines. What exactly is the West seeking to achieve from this media and psychological warfare?

They [the Western countries] are seeking to gain more concessions. They know about the clear red lines of the Islamic Republic of Iran. The way your stance is treated diplomatically when you openly announce your red lines differs from when you speak indirectly and implicitly. They have got a grasp on the question and are trying to say that they are not to blame if the talks – one in a ten thousand or one in a million – produce no results and to shift the blame onto Iran.

To date, Iran has the world public opinion on its side with all people having faith in Iran’s legitimacy and rightfulness. Nuclear talks are positive on both sides: in case an agreement is struck, Iran will reap its benefits; and if the talks produce no result, [Iran can prove that] the US and fellow P5+1 members are to blame for the inconclusiveness of the talks. If Iranian negotiators insist on their stances, the other side will be more pressed for time.

The American side says that some restrictions will be imposed on Iran for good. How does it harm Iran?

If the restrictions will be in place for a long time, they will slaughter the country’s nuclear industry. Iran’s scientists will lose their interest and motivation. If a sports team is said that they can simply do preparation exercises but are not allowed to take part in a competition, everything [they enjoy] will be lost. If the indigenized nuclear industry is to be brought to a halt, it would grow weaker [over time].

Secondly, when you accept long-term restrictions, you make yourself limited or deprived without knowing what will unfold on the international stage after five years. Iran sees no reason – logically and legally – to accept such restrictions. They want to make sure that there is no diversion in Iran’s nuclear program. They know about it, but feign sleep. They have always said that the [International Atomic Energy] Agency is not in a position to fully verify Iran’s [nuclear] measures. We are not supposed to prove this. The burden of proof is on the one who claims there are diversions in Iran’s program.

Why do we need to stand up to the other side’s acquisitive demand that decisions can be made after the UN nuclear agency’s verification?

They [the IAEA inspectors] may prolong the verification process for Iran up to ten years and then release a statement saying that they cannot verify [Iran’s activities]. There seems to be no end in sight spatially and temporally.

The agency did not pass its test on Iran in the past. Drawing on no sound reason, the agency referred Iran’s case to the UN Security Council. There was no reason for that. Iran is concerned about the inspections which may go beyond what has been envisioned in the [Additional] Protocol [of the NPT] because the IAEA did not pass its test with flying colors in the past.

Which scenario do you think will become a reality: the inconclusiveness of the talks or an agreement with some sort of restrictions?

I do not like to say something and correct myself afterward. […] But I think an honorable agreement which meets minimum expectations [of the two sides]. As for the extension of the talks, if they do not drag on for more than one month, that would not bother me. But if the Americans make miscalculations and turn the tables in a way that an agreement is not reached, it would translate into a political suicide for the other side.

I think an agreement should be arrived at unless the Americans seek to commit a political suicide. It is too hard to predict the events on the political front. We are now in Tehran and far from Vienna [the venue of the nuclear talks].

How do you think the Supreme Leader’s choice of words for the country’s negotiators – among them trustworthiness, bravery, piety and zeal – can help Iran’s nuclear team?

These characteristics are what is needed for this job. If one is engaged in a war on the diplomatic front, they have to enjoy such traits. The Supreme Leader’s words obviate the need for us to talk on that. […]

The negotiating team has boosted its self-confidence drawing on the Supreme Leader’s praising remarks. Self-confidence earns you courage and calms you down. Building on the [Leader’s] trust, the negotiators are trying to produce results. What is our destiny will lead to blessings for the country. The Supreme Leader’s remarks helped the negotiating team greatly. Those who were worried are now at ease.

You were not a worrier, were you? [A reference to the so-called Worriers who are the fervid supporters of former President Ahmadinejad and harsh critics of President Rouhani’s government and its policies]

I’m not in that particular sense of the word, but I am concerned about the gamesmanship of the Americans.