A look at Iranian newspaper front pages on March 9

The comments of the Supreme Leader at a meeting with environment officials dominated the front pages of Iranian papers on Monday. At the meeting Ayatollah Seyyed Ali Khamenei described the environment as a national issue and called for those who line their pockets at the expense of the environment to be seriously dealt with.

Afarinesh: Iran has signed an MoU with Russia to produce fuel for Bushehr Nuclear Power Plant. 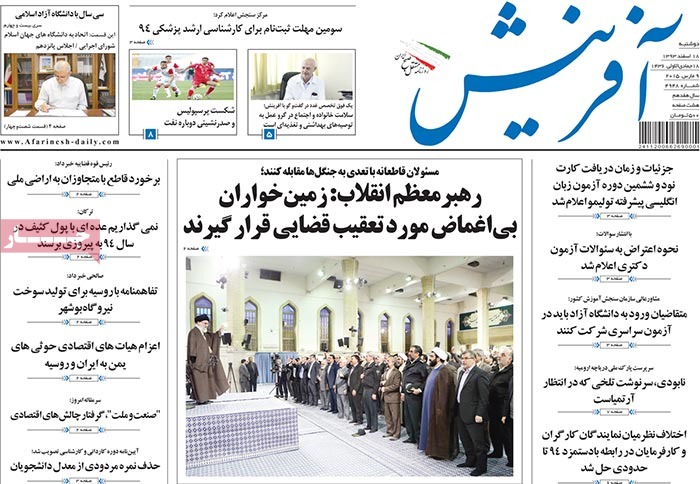 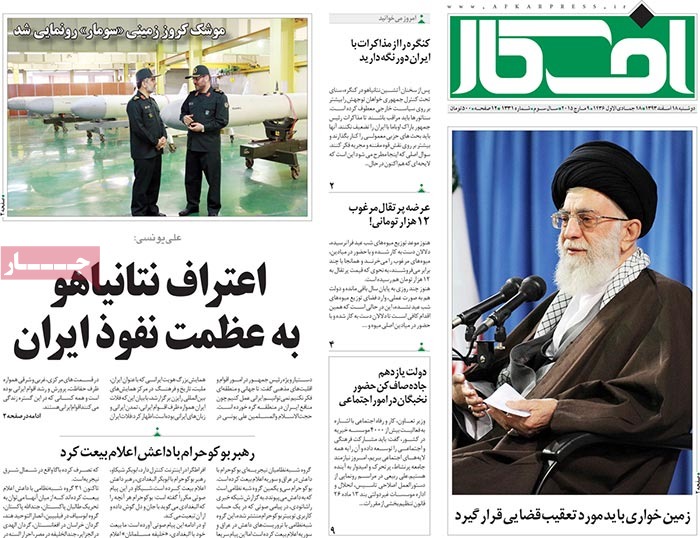 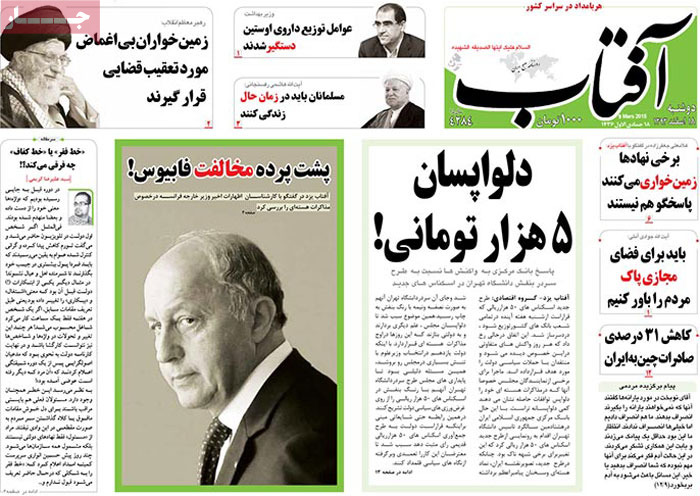 Arman-e Emrooz: Iran’s giant stride has resulted in a change of attitude in the ranks of critics [of nuclear talks].

Another round of Iran-US talks will be held in the Swiss city of Lausanne next week. 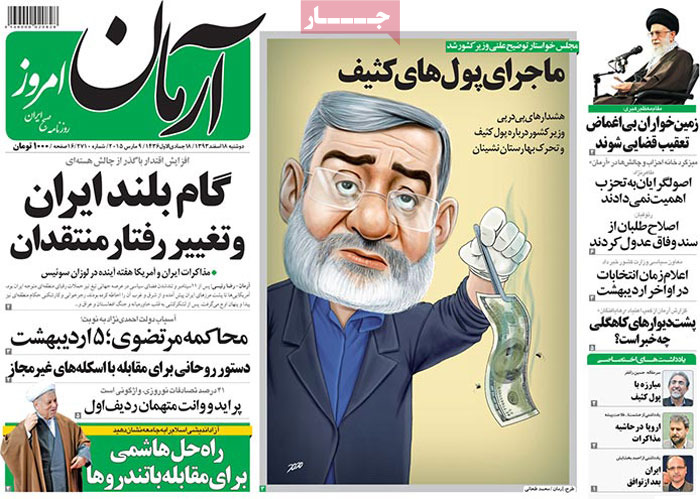 Asrar: “Wisdom is the only weapon with which one can counter extremism,” said Chairman of the Expediency Council Ayatollah Akbar Hashemi Rafsanjani. 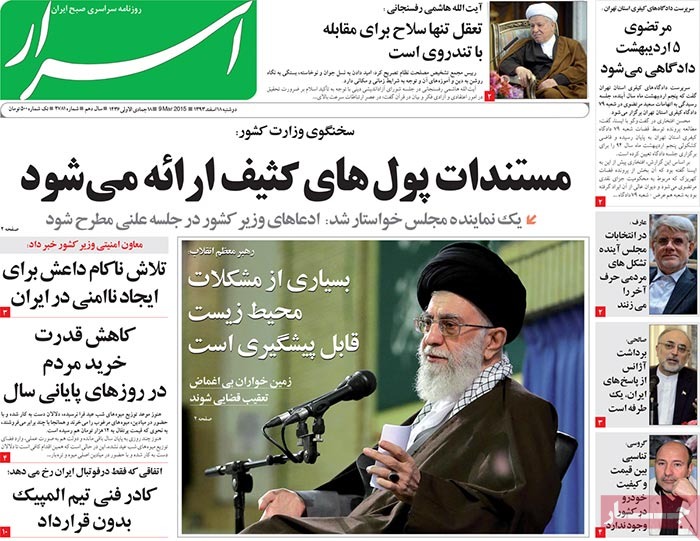 Ebtekar: Those who are not officially in charge of trade should stop their involvement in imports of goods.

The president has ordered unauthorized quays to be closed down. 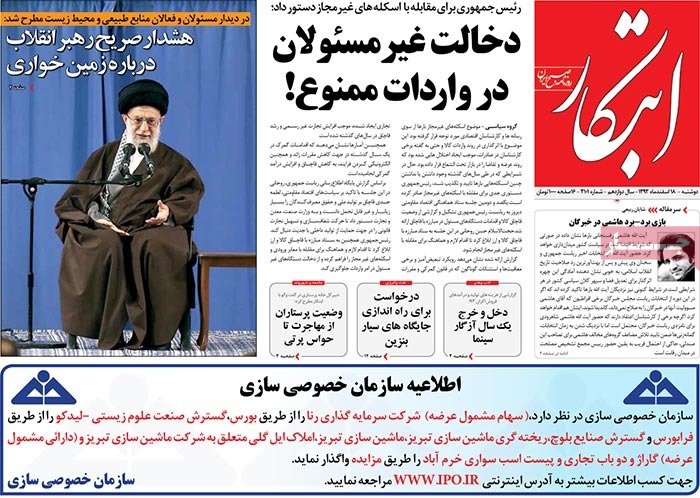 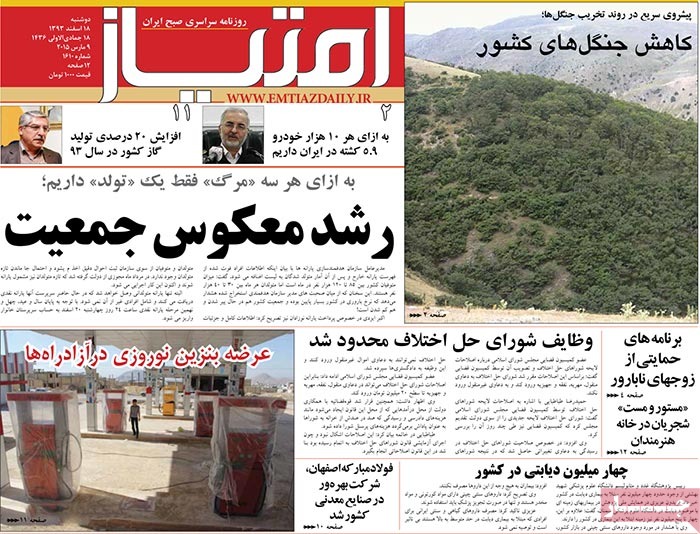 Ettela’at: “Officials should resolutely deal with those who destroy forests,” the Supreme Leader said.

Ayatollah Khamenei made the comment at a meeting with officials in charge of protecting natural resources and the environment. “Land grabbers should be prosecuted.”

Ettela’at: Abu Bakr al-Baghdadi has ordered 7,000 ISIL militants to be deployed to Iraq from Syria.

This comes following back-to-back defeats the terrorist group has suffered in Iraq. 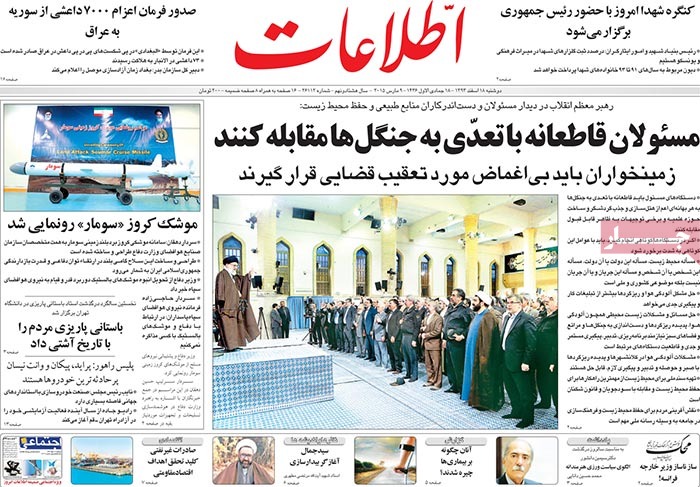 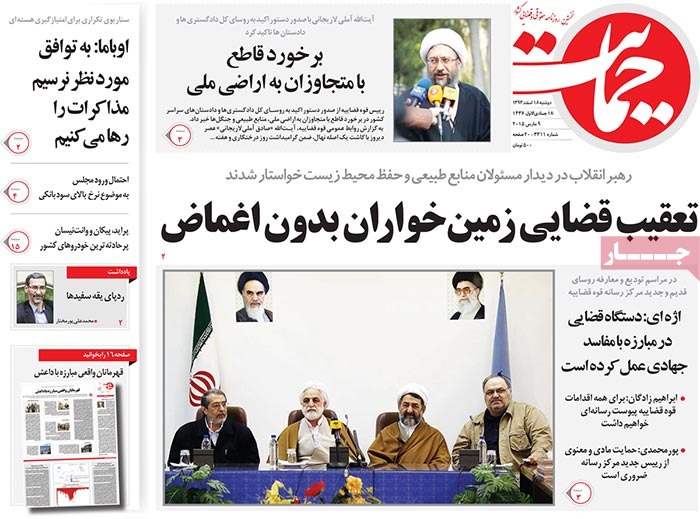 Iran: Tel Aviv has been the scene of the largest anti-Netanyahu rally. 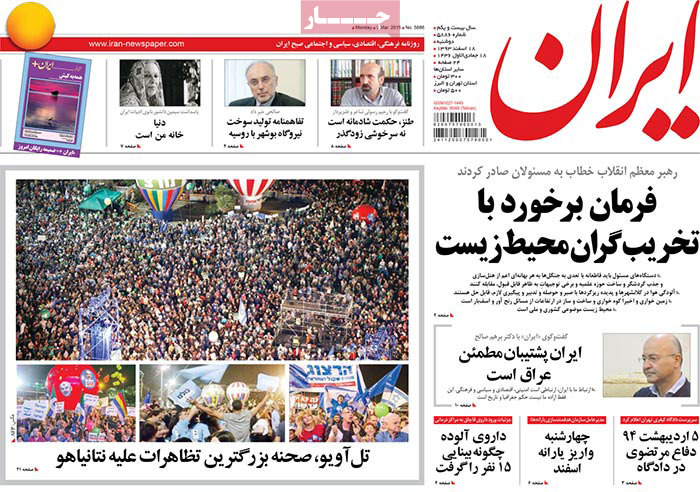 Jamejam: Those who distributed blinding fake drugs [recently used in three clinics] have been arrested. 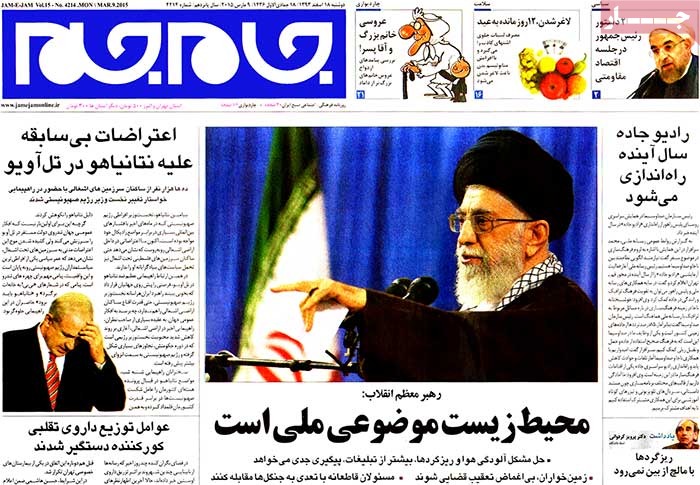 Jomhouri Islami: The interest rates banks charge for loans to producers will be moderated. 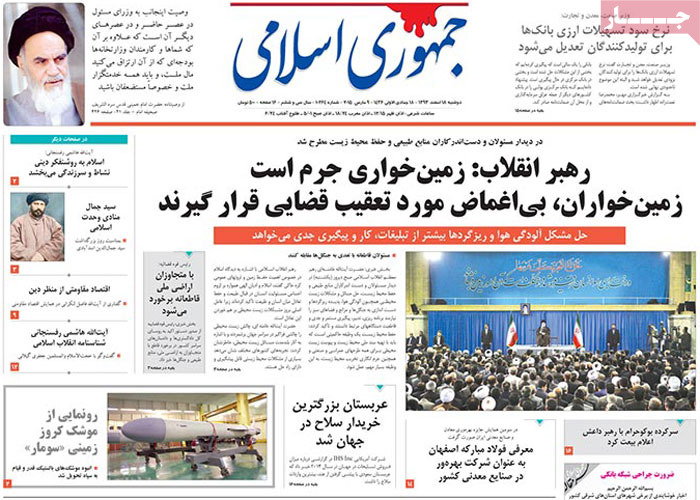 Resalat: “A tortuous road lies ahead,” said the director of Iran’s Atomic Energy Organization of nuclear talks between Tehran and P5+1. 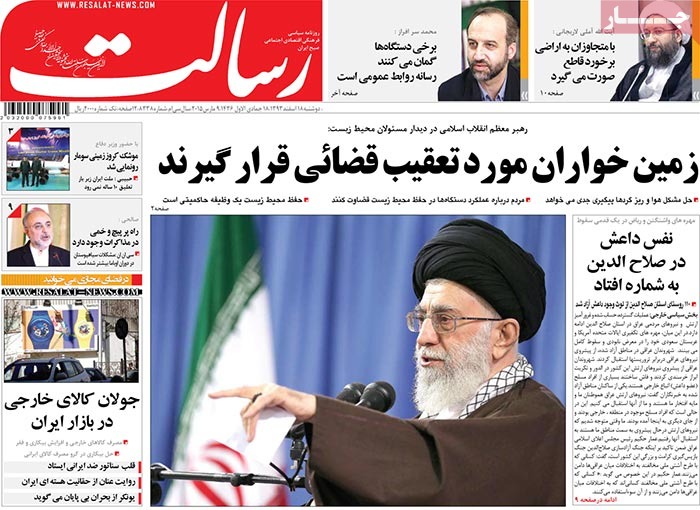 Rooyesh-e Mellat: “Reports suggest [Iranian border guard Jamshid] Danaeifar [who was kidnapped by terrorists who fled across the border to Pakistan] has been martyred,” said the deputy interior minister. 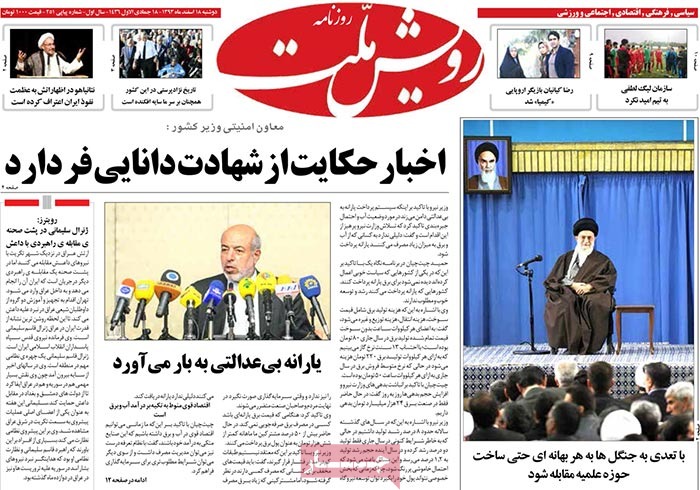 Shahrvand: “IS has been cracked down on in border towns,” said the deputy interior minister.

He further said that the terrorist group sought to create insecurity in Iran’s border towns through proxy, but its attempts were foiled by security forces. 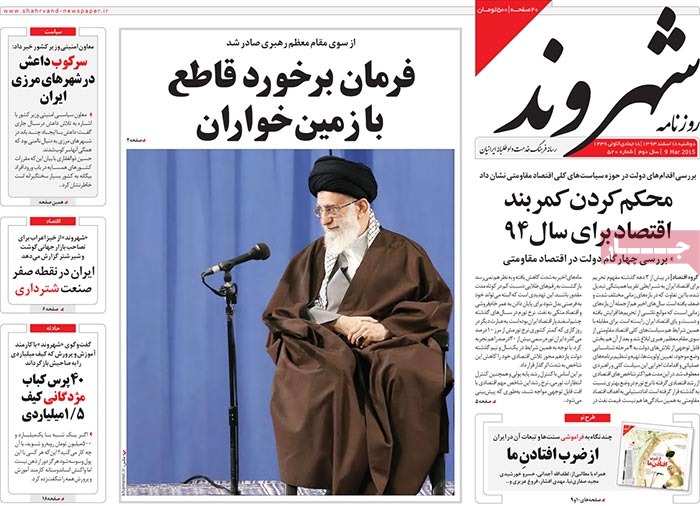 Sharq: “My foray into politics would depend on conditions on the ground,” said the grandson of the late Imam Khomeini. 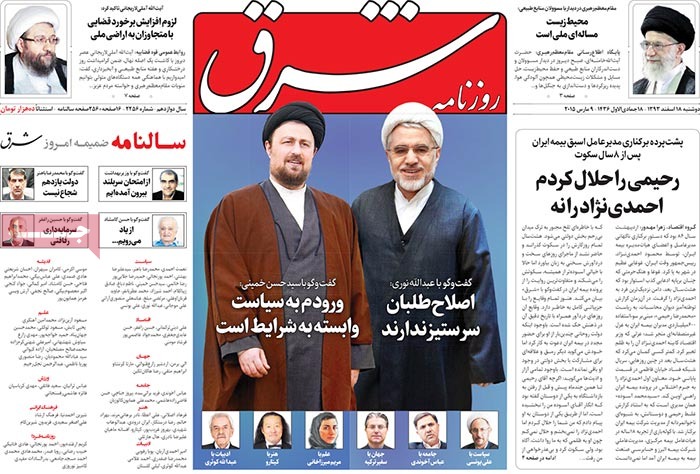 Tejarat: “We have things to say people so badly want to hear about,” said the deputy Judiciary chief. 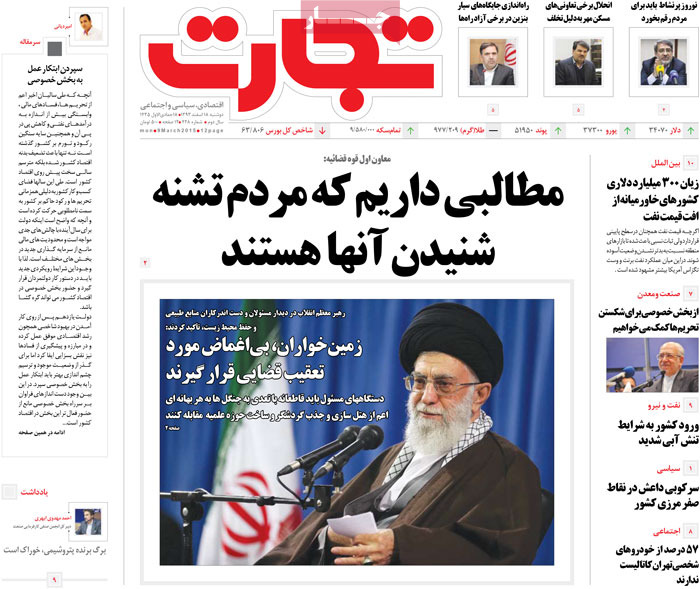