A look at Iranian newspaper front pages on March 7

Comments by Foreign Minister Mohammad Javad Zarif upon return home from Switzerland where he led another round of nuclear talks with the US dominated the front pages of Iranian newspapers on Saturday. The release of an Iranian diplomat abducted in Yemen also appeared on the covers of the dailies.

Abrar: State managers [who wish to run for parliament] have until June 17 to resign their current positions.

The announcement was made by the deputy interior minister for political affairs. 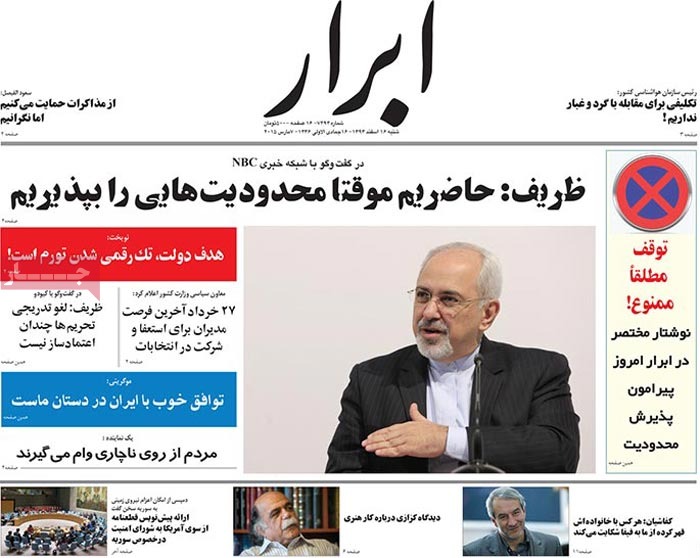 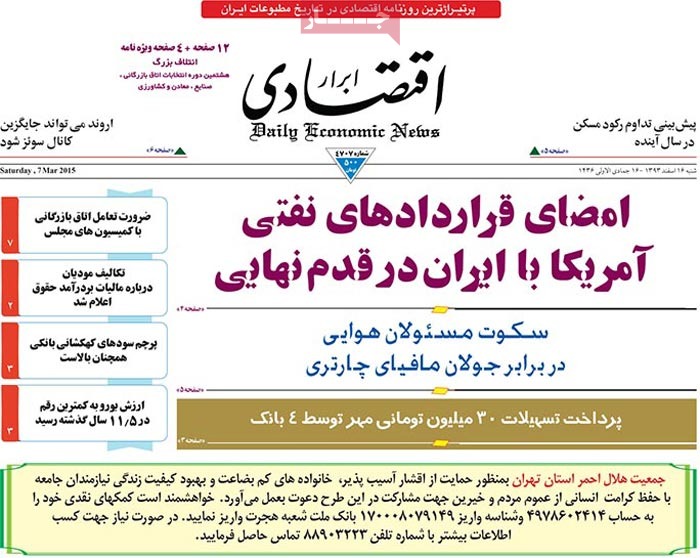 Afkar: “We made more progress in Montreux,” said Iranian Deputy Foreign Minister Seyyed Abbas Araghchi of nuclear talks with the US in the Swiss city. 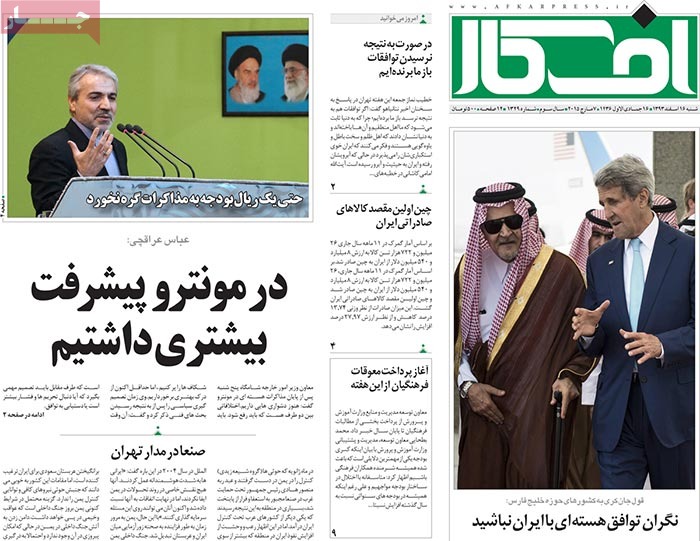 Aftab-e Yazd: Hashemi’s run for chairmanship [of the Assembly of Experts] has become more likely.

It came after the likelihood of Ayatollahs Jannati and Mesbah Yazdi’s candidacy for the top post increased. 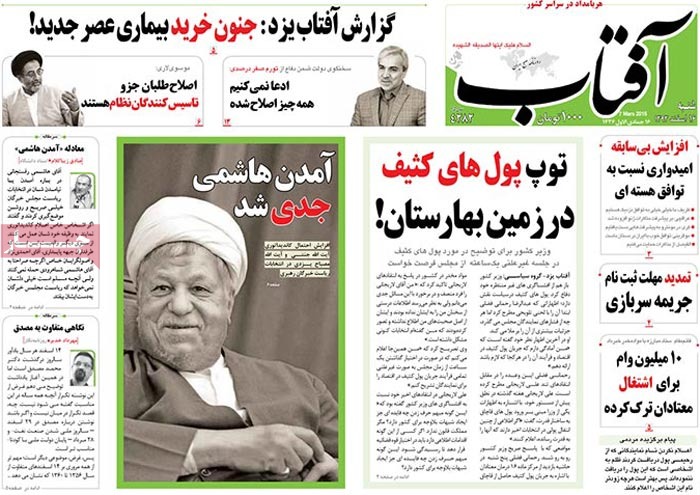 Arman-e Emrooz: Secretary Kerry’s Saudi Arabia visit shows that a deal is around the corner.

Riyadh has joined the club of nations who favor a nuclear agreement with Iran. 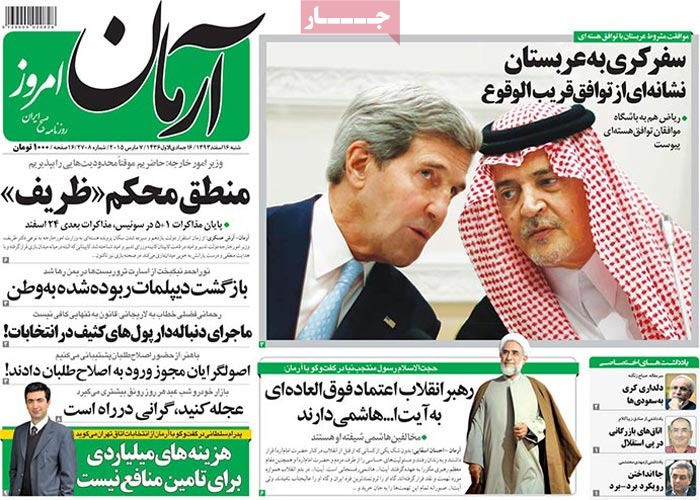 Asr-e Rasaneh: The Saudi Hajj minister has vowed to settle the visa-related problems of Iranian pilgrims.

The promise came at a meeting with the director of the Iranian Cultural Heritage Organization. 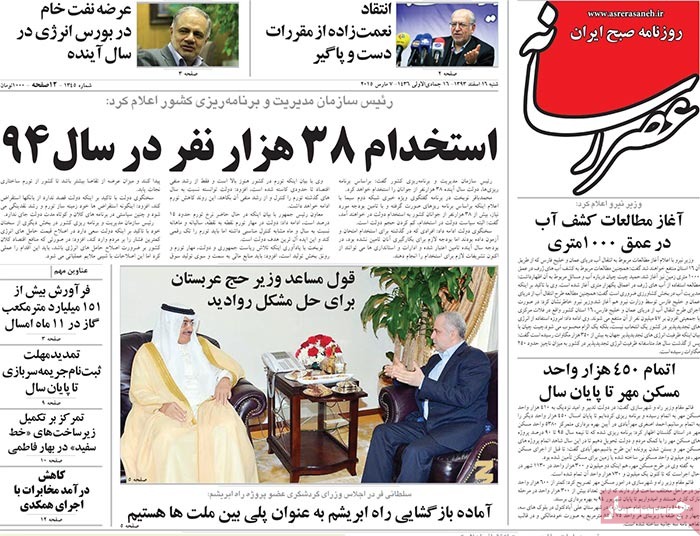 Asrar: “Not even a single rial of next year’s budget is tied to nuclear talks,” said the government spokesman. 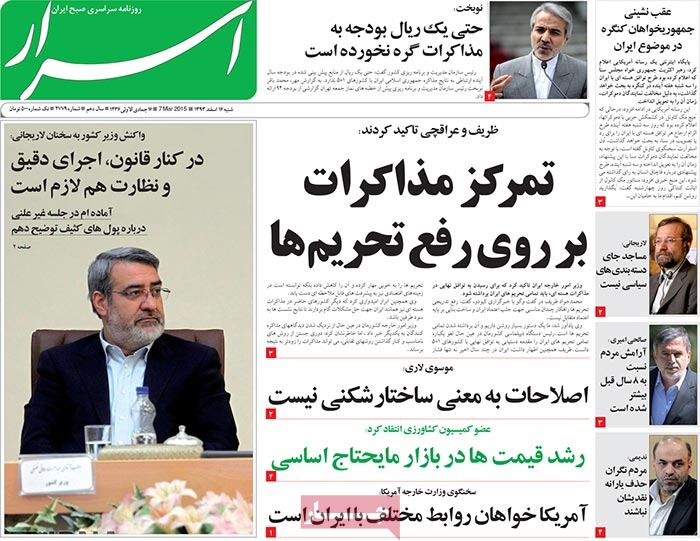 Foreign Minister Zarif has said that we don’t need to settle every single problem we have with the US. Iran won’t accept any limits in the absence of a deal. 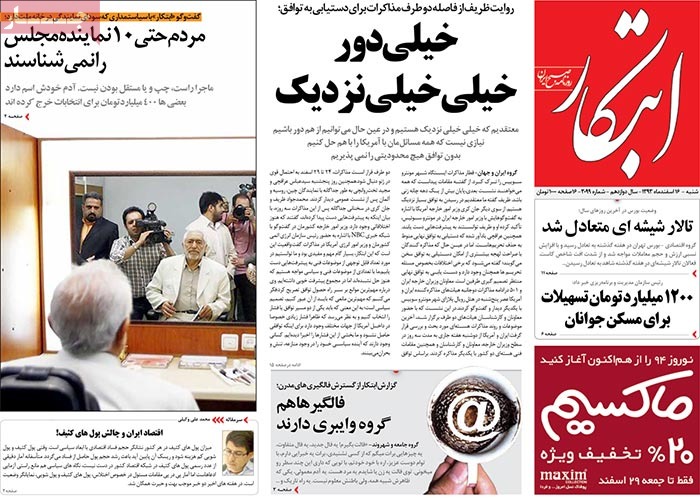 Foreign Minister Mohammad Javad Zarif made the comment upon return home following the end of another round of nuclear talks in Switzerland.

“I will spend the New Year eve in talks; that Israel poses a threat is a reality”. 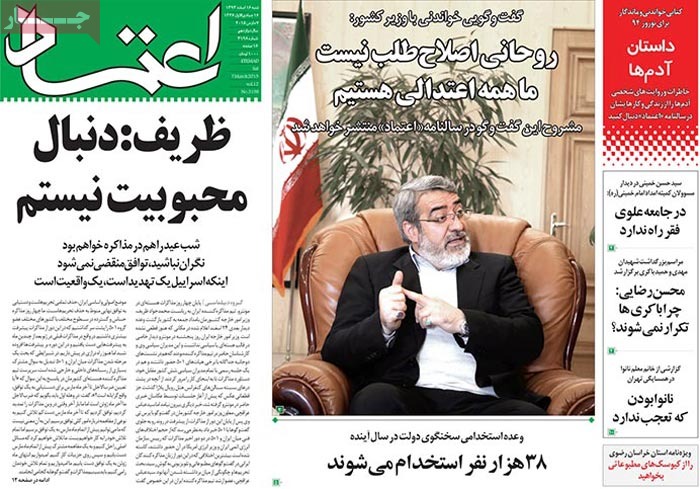 Ettela’at: “Technical talks are over; political decisions lie ahead,” said the Iranian foreign minister of negotiations with P5+1.

Ettela’at: “Everyone should make efforts to prevent environmental catastrophes,” said President Rouhani as he planted a tree to mark the Natural Resources Week. 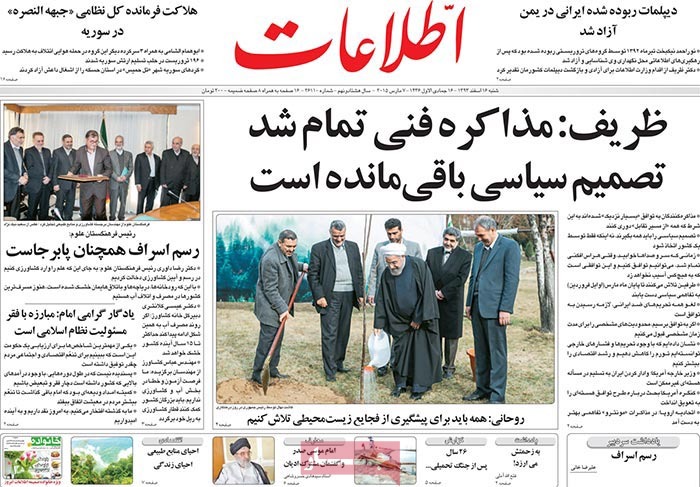 Iran: “Netanyahu is worried a deal with Iran might expose his fabrications,” said Zarif in an interview with NBC News. 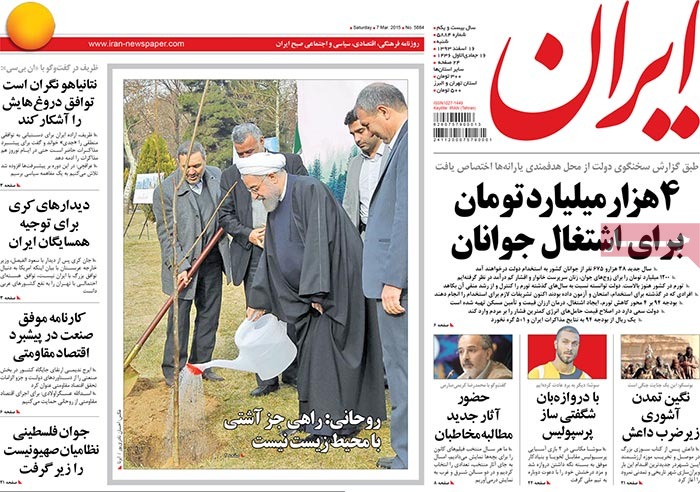 Jomhouri Islami: The Iraqi town of Tikrit is close to complete liberation. 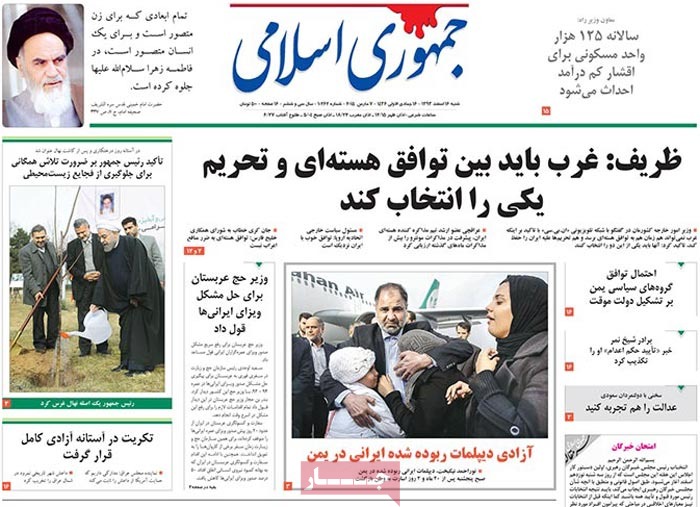 Kayhan: A ten-year suspension [of certain nuclear activities] is even more deceptive than a two-stage deal. 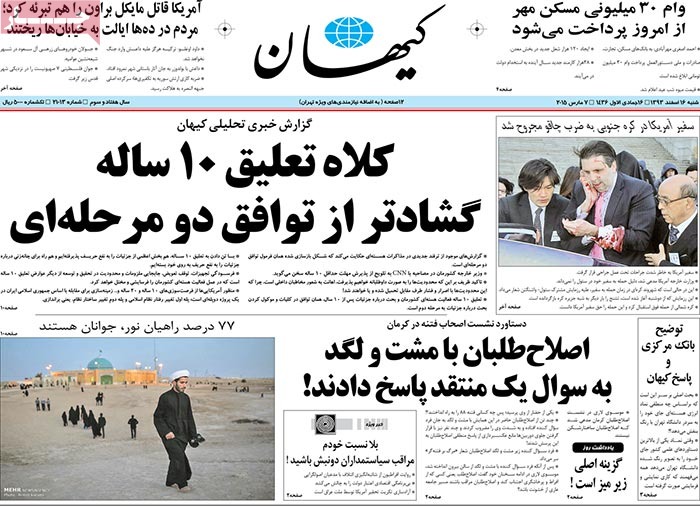 After taking a hammer to ancient items in the Mosul Museum, IS terrorists have now bulldozed the historic city of Nimrud. 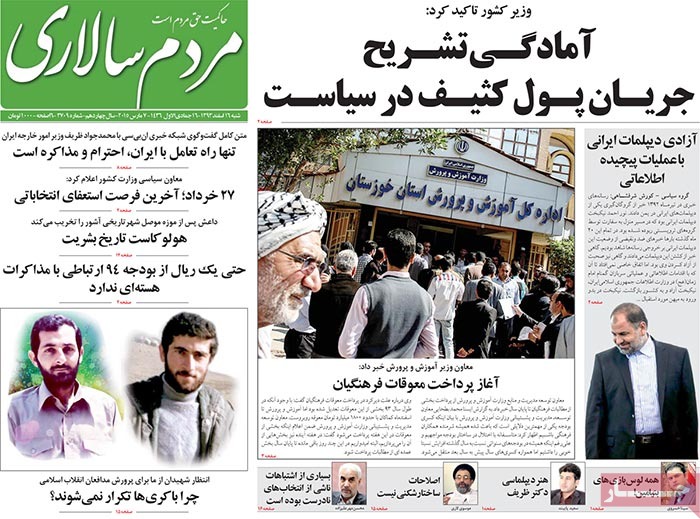 Siasat-e Rooz: “The US and Israel do not dare take action against Iran,” said the commander of the Islamic Revolution Guard Corps. 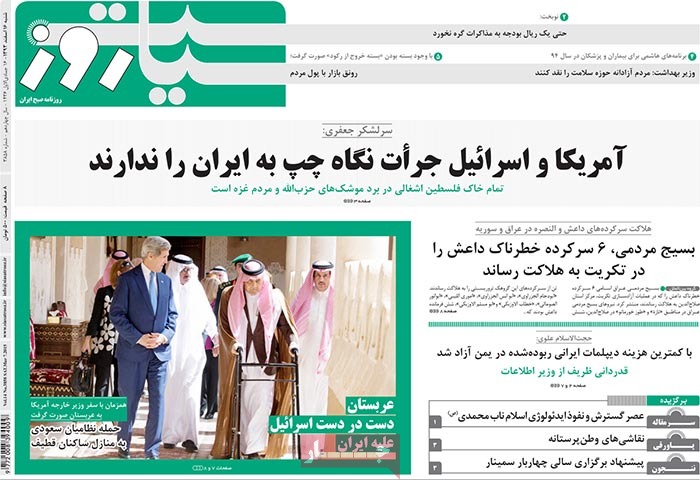 Tejarat: “Inflation will slip to around 14 percent next year,” said the government spokesman. 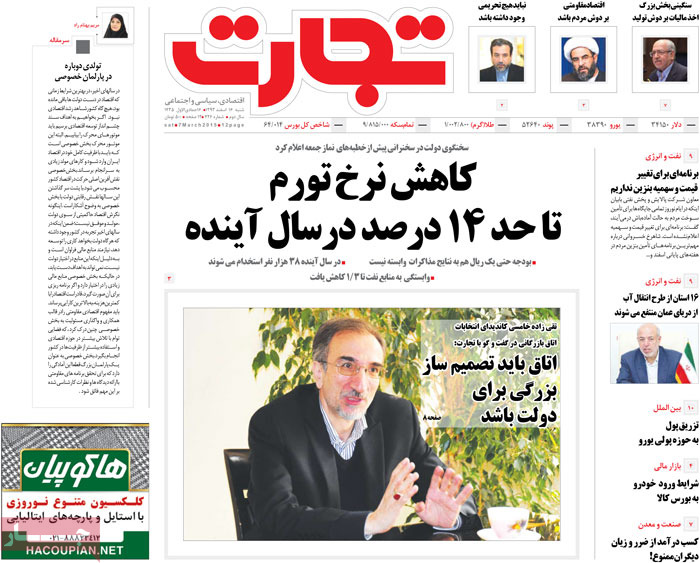