A look at Iranian newspaper front pages on March 4

Reaction to the deceptive remarks of Israeli Prime Minister Benjamin Netanyahu in the US Congress where he warned American officials of what he claimed to be a bad deal with Iran dominated the front pages of most Iranian newspapers on Wednesday. Day two of the talks between Iranian and US delegations was also in the headlines. And, reformist-leaning newspapers quoted Chairman of the Expediency Council Ayatollah Hashemi Rafsanjani as criticizing the hardliners at home for their opposition to anything President Rouhani’s administration does.

Abrar: Terrorist defense lines have been shattered in Tikrit, Iraq. 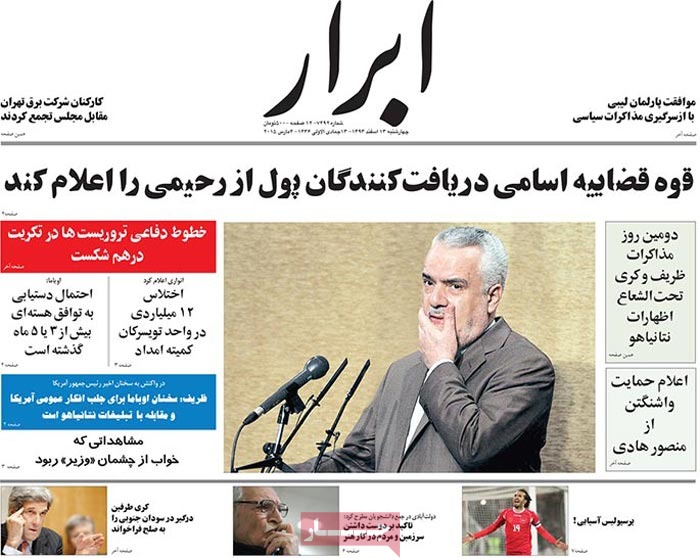 Afkar: Reports that a senior Oil Ministry official has fled to Canada have been denied. 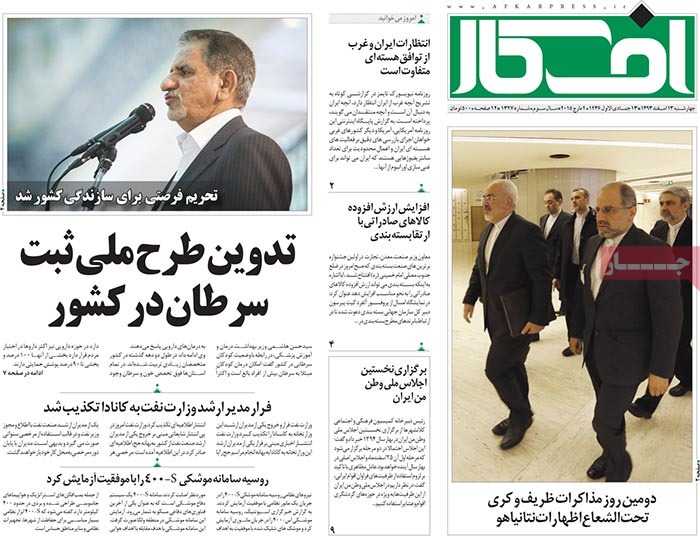 Aftab-e Yazd: Iran’s share of the Turkish market is less than five percent. Arman-e Emrooz: Different comments by the spokesman of the Guardian Council

It is possible for candidates who have been qualified before to be disqualified [in upcoming elections].

Arman-e Emrooz: “As for the saddening incident of Kahrizak, we have nothing to say but apologize,” said the police chief. 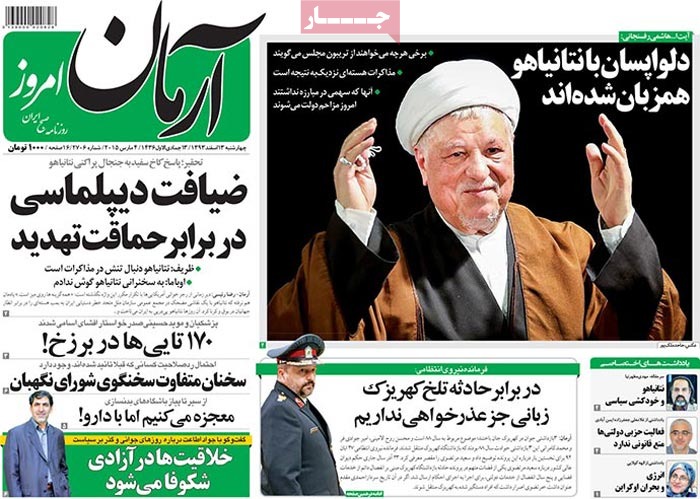 Ebtekar: “The first round of secret talks between Iran and the US took place when Salehi was in office [at the helm of the Foreign Ministry],” said Hamid Reza Asefi, [a former FM spokesman]. 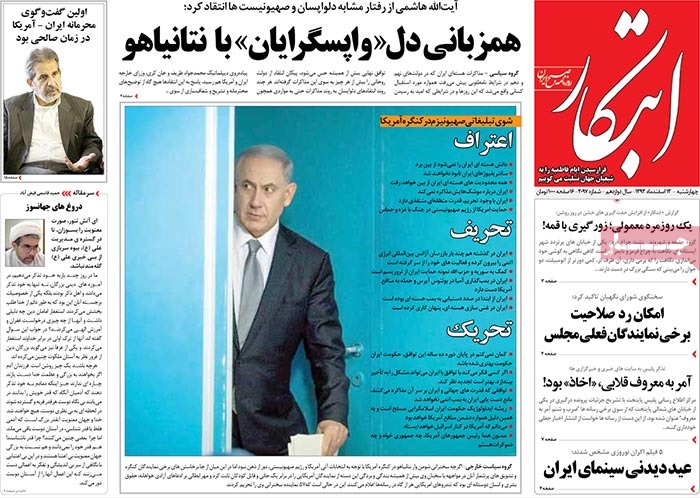 Emtiaz: The attorney general has said that an investigation is underway into a $2.2 billion loan.

Emtiaz: The amount of fines poachers will have to pay has increased. 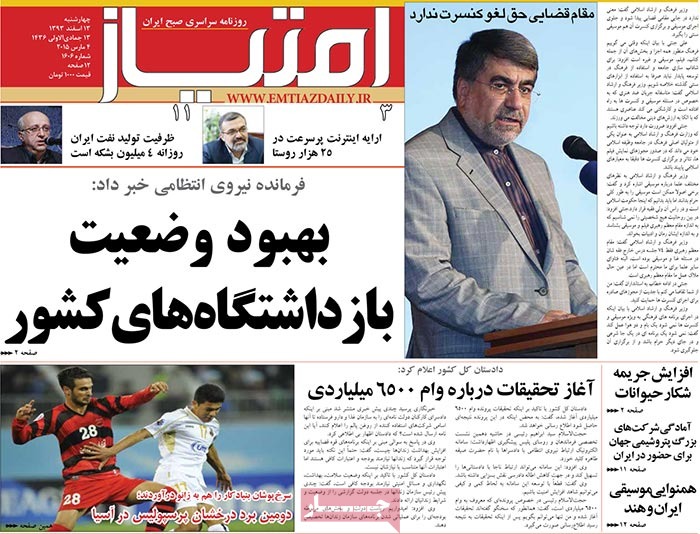 Etemad: Parliament has required the government to cut the cash subsidies of 5.5 million high-income individuals.

The government also has to register any new recipient of subsidies in cash.

Etemad: Efforts are underway to untie the technical knots of [nuclear] talks.

Iran and the US explore ways of pushing the talks forward. 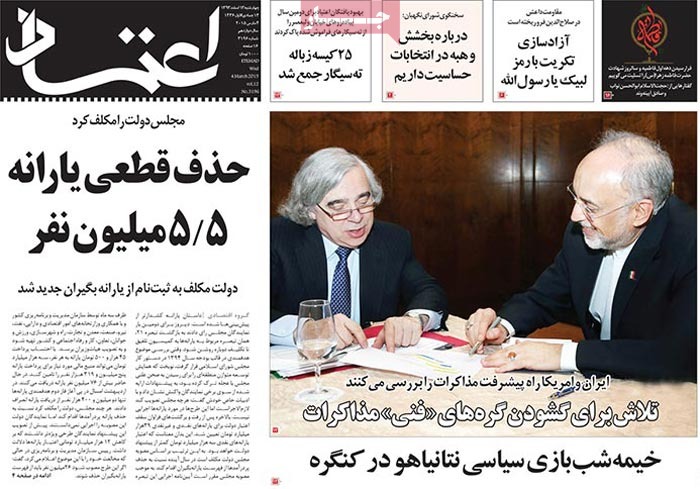 Ettela’at: The US has stopped intelligence cooperation with Israel over Iran’s nuclear program.

Ettela’at: Plans have been made public to stop particulates affecting people’s lives and health across the country. 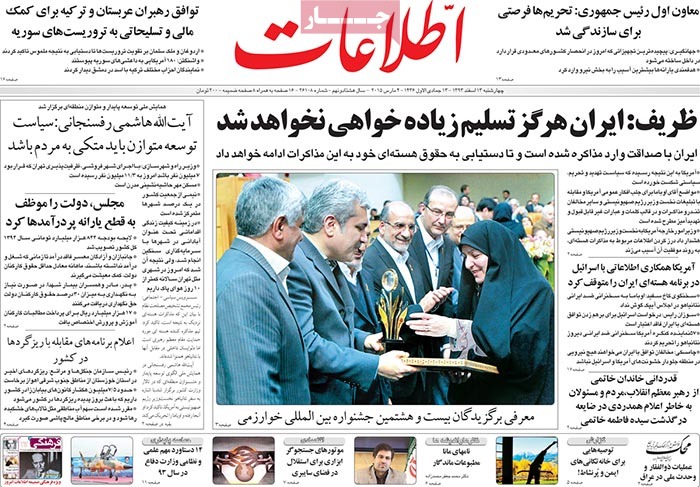 Hemayat: A famous US analyst has said that Iran owes its achievements to “the Genius of its Supreme Leader”. 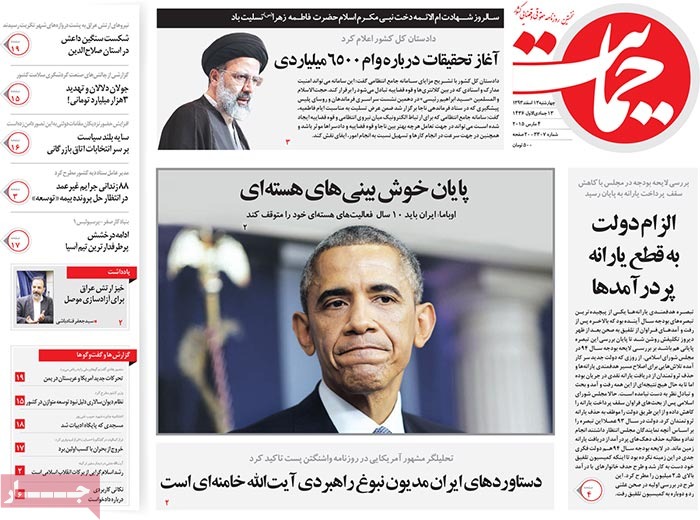 Iran: Women have a three percent share of parliament seats. 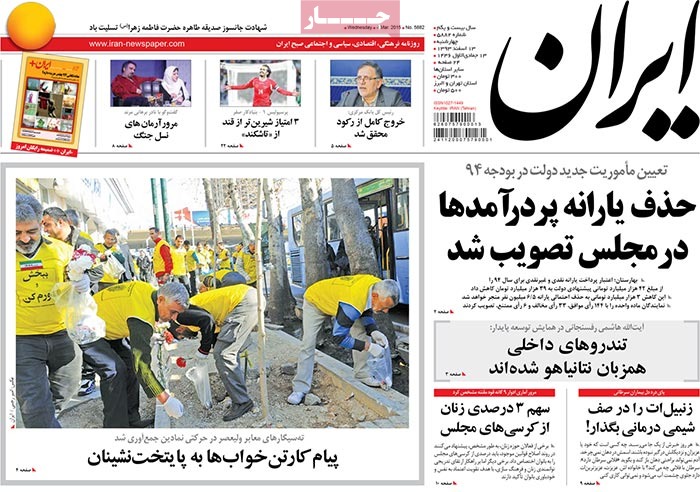 Jomhouri Islami: After a second day of talks between Iranian and US delegates, hopes of clinching a nuclear deal have increased. 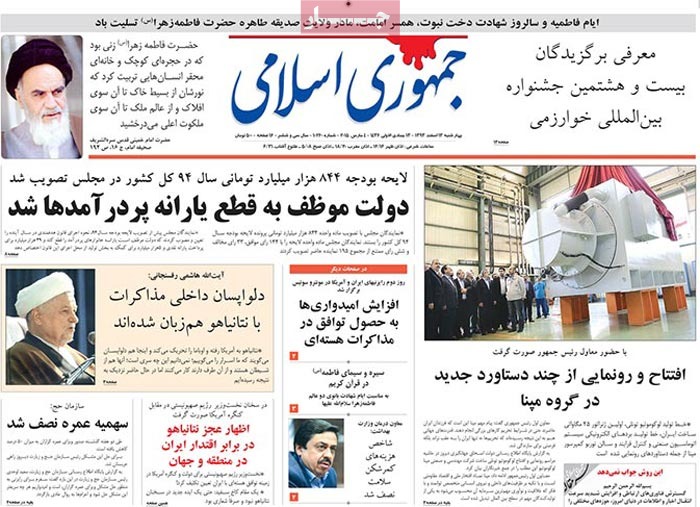 Kaenat: Parliament has wrapped up its review of the budget bill which has now been sent to the Guardian Council for final approval.

Kaenat: World petrochemical giants are poised to work in Iran. 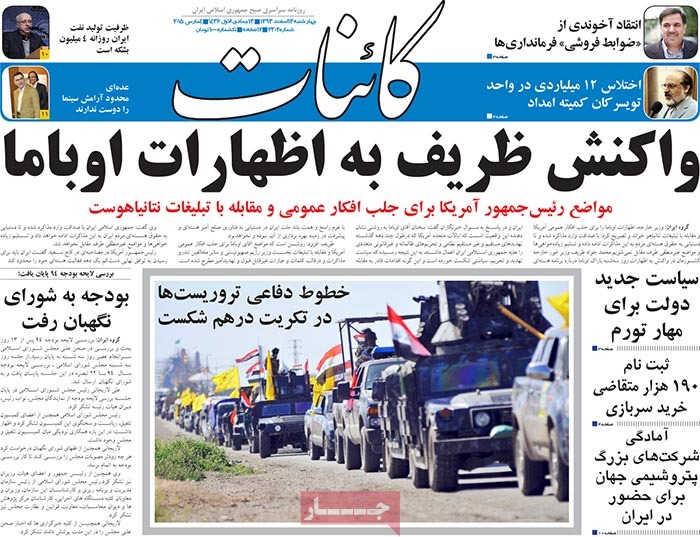 Kar va Kargar: “Judicial officials have no right to override the permissions issued for music concerts,” said the minister of culture and Islamic guidance. 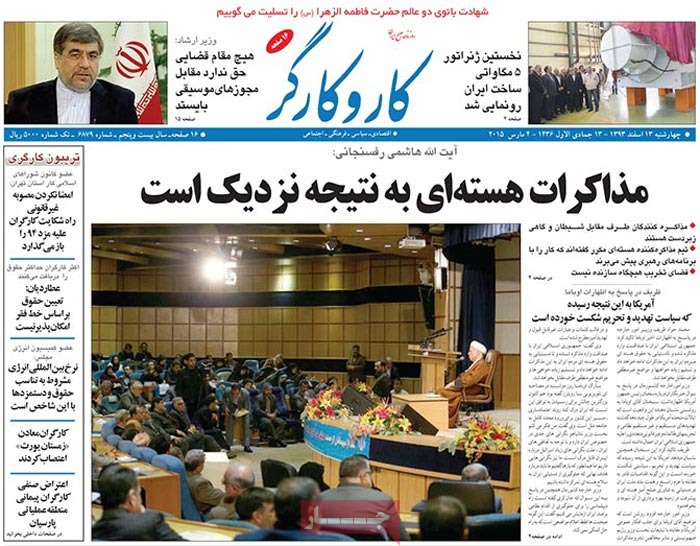 Kayhan: The nonsense of a speech Netanyahu delivered [in the US Congress] cost those who were overexcited [about the Geneva deal] a lot. 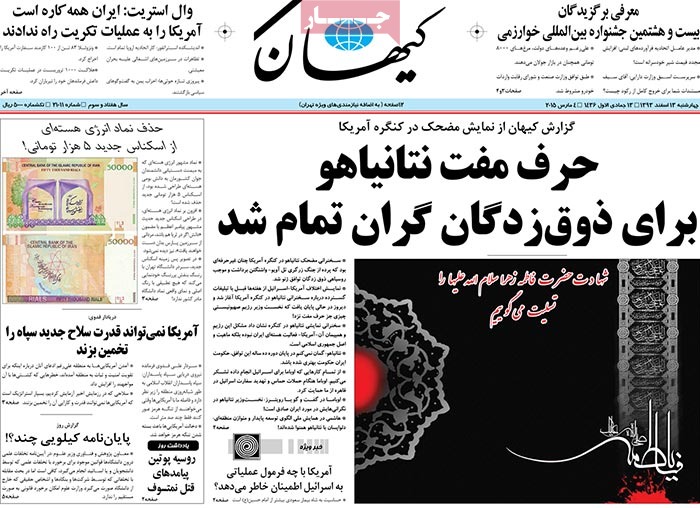 Khorasan: Winners of the 28th Kharazmi International Festival have been named. 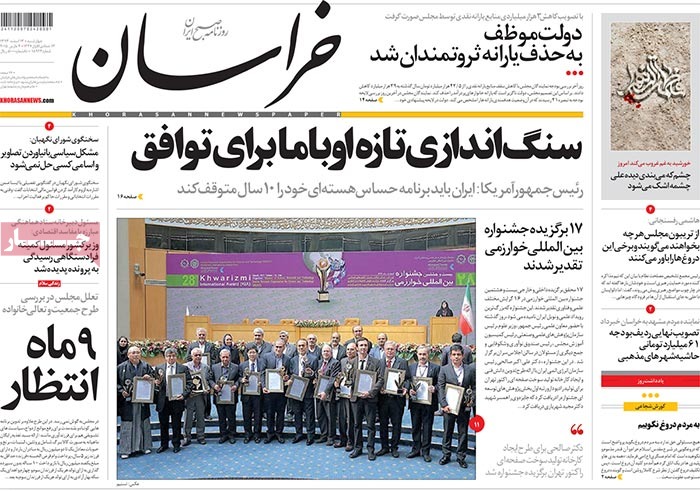 Mardomsalari: “Worriers [Ahmadinejad supporters] have joined the Netanyahu chorus,” said the chairman of the Expediency Council. 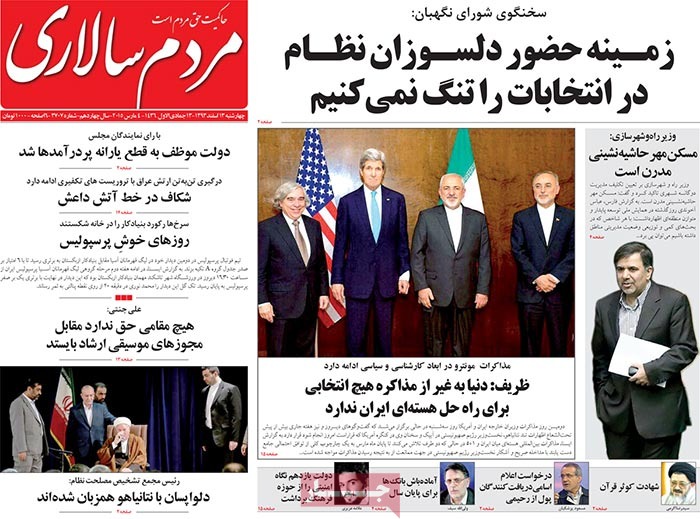 Sharq: A committee has been formed to cross out the rich from the list of individuals eligible for cash subsidies. 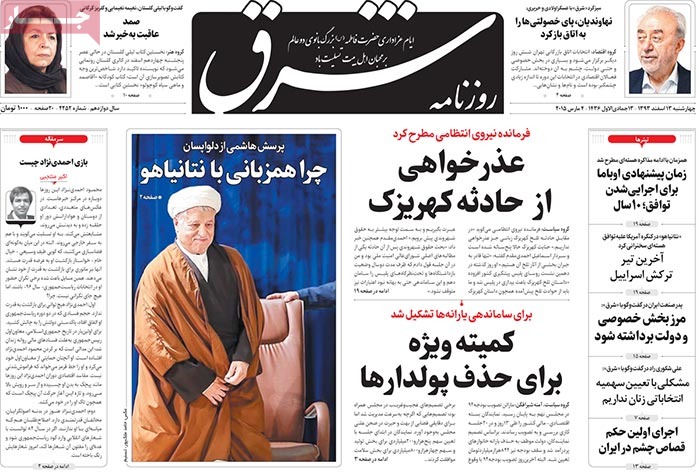 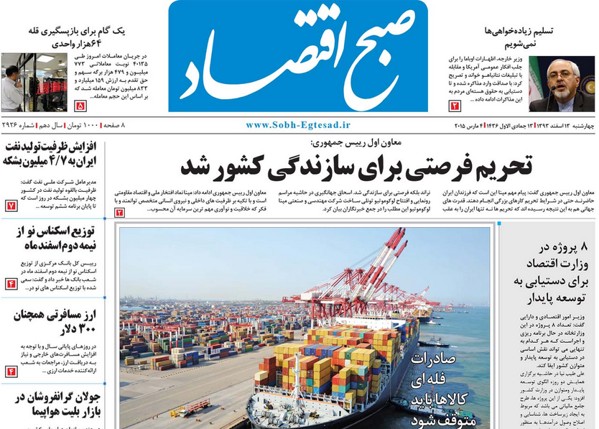