A look at Iranian newspaper front pages on March 2

The comments of the Supreme Leader at a meeting with producers of Track 143, a war-themed movie, dominated the front pages of Iranian newspapers Monday. In the meeting the leader said he enjoyed the Sacred Defense drama. And upcoming nuclear talks between representatives from Iran and the US also appeared on the covers of dailies.

Abrar: “Eighteen couples get divorced every hour,” said an official with the Civil Registration Organization. 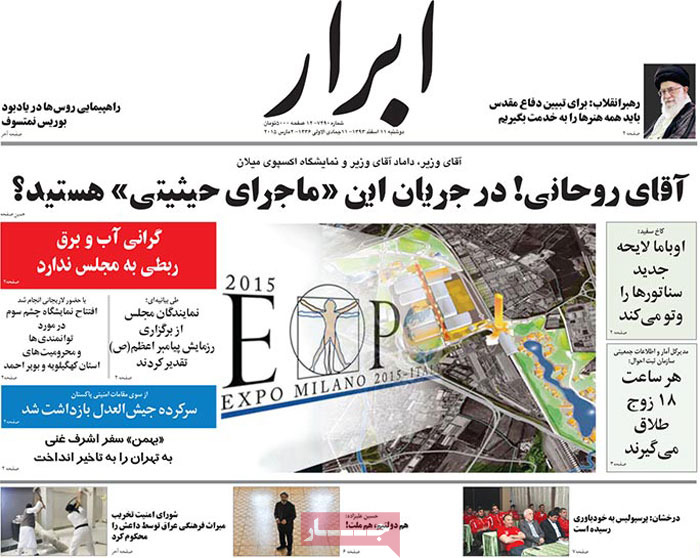 Abrar-e Eghtesadi: [US] Dollar is no longer the currency of choice in 17 percent of trade exchanges in the world.

Abrar-e Eghtesadi: A new round of oil talks between Iran and Italy has gotten underway in Tehran. Arman-e Emrooz: The minister of labor has boarded the train of impeachment.

Arman-e Emrooz: Even the purest of waters cannot wash away the mistakes Ahmadinejad committed.

That was the reaction of some MPs to comments by Morteza Agha Tehrani, an ally of the former president. 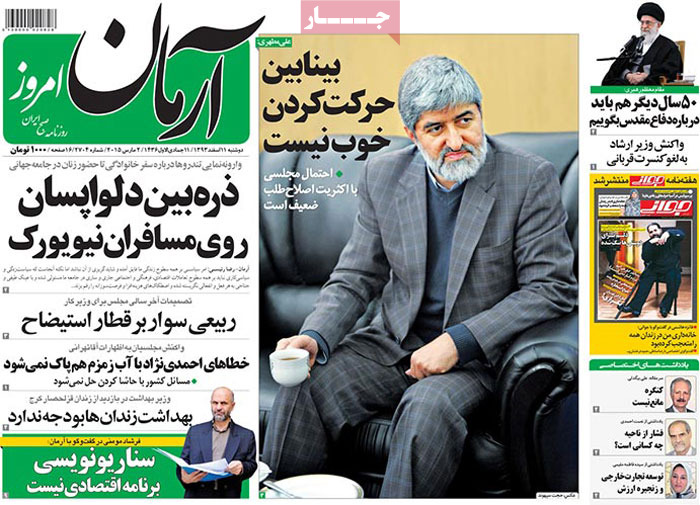 Ebtekar: A first Iranian plane has landed in Sana’a, Yemen. 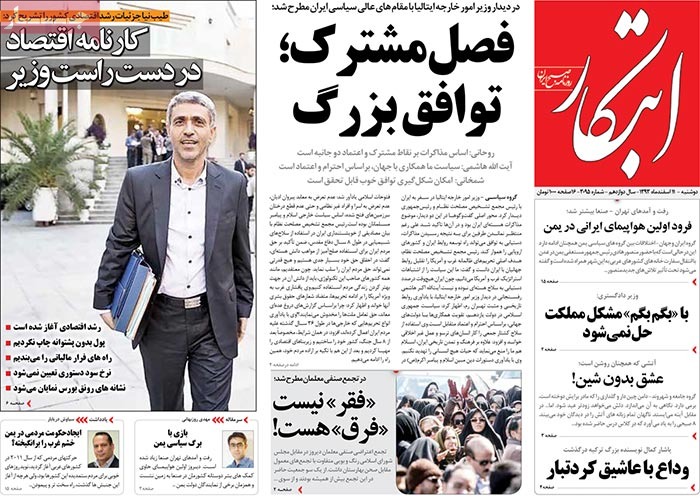 Etemad: A new round of talks to cement progress made so far and cut ifs and buts 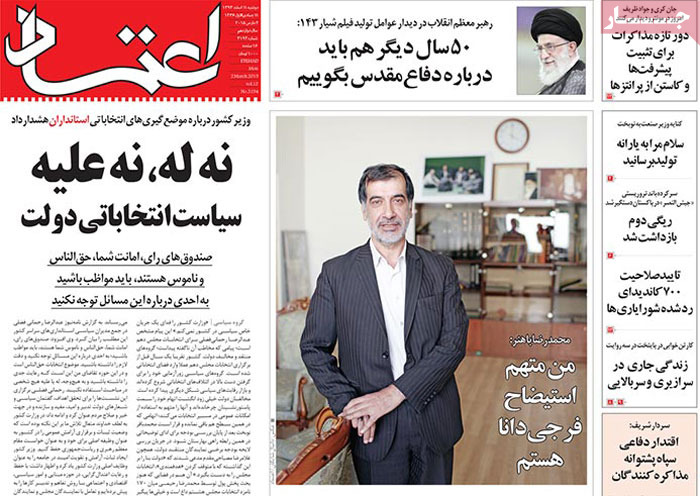 Ettela’at: “All sanctions should be lifted all at once,” the president said at a meeting with the visiting Italian foreign minister.

“Iran has always honored its commitments and everybody knows that Iran is a serious partner in nuclear talks. To settle the nuclear case, there is no other way than to negotiate,” the president further said.

“Collective cooperation is needed to deal with terrorism which poses a threat to all nations.”

Ettela’at: The health minister has called for more attention to healthcare in detention facilities. 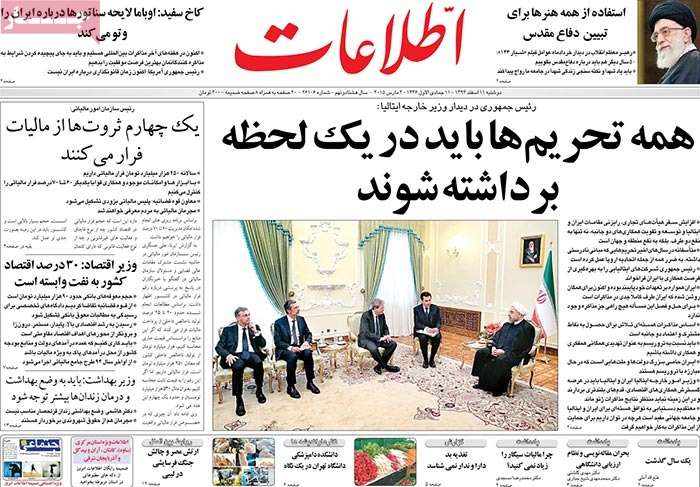 Hemayat: Banks are interfering with production and industries. 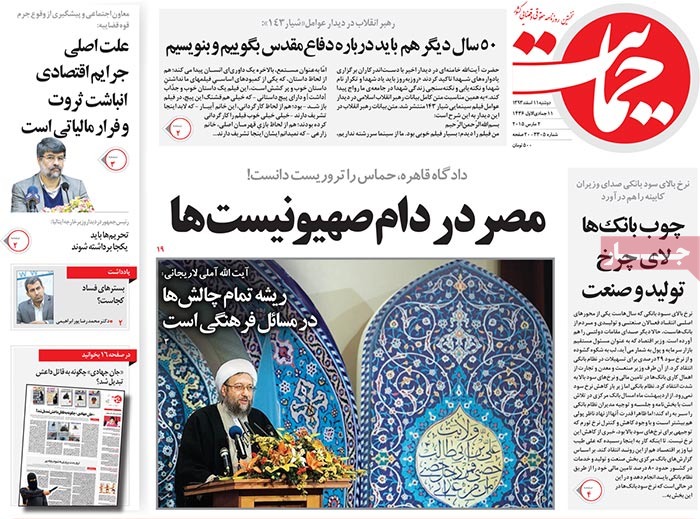 Iran: The deal between [Iranian automotive giant] Iran Khodro and France’s Peugeot has been finalized.

Iran: A final shot by Netanyahu to prevent the conclusion of a nuclear deal.

Iran: The minister of culture has said that his ministry did not approve of the cancellation of a concert by Alireza Ghorbani. 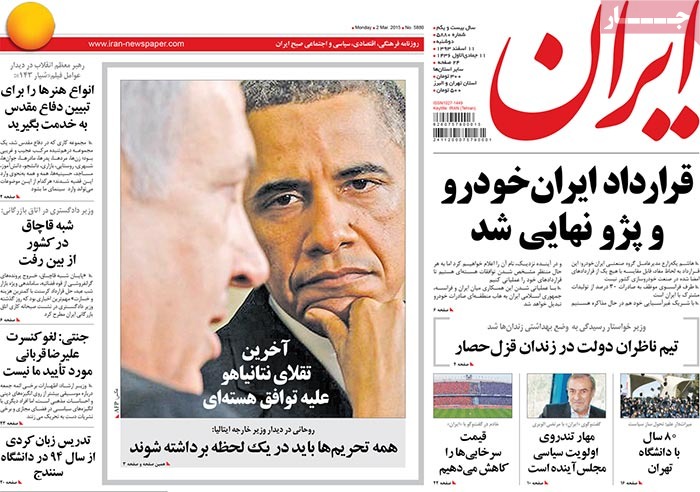 Jomhouri Islami: The minister of trade has said that online purchases in Iran stand at around $17 billion. 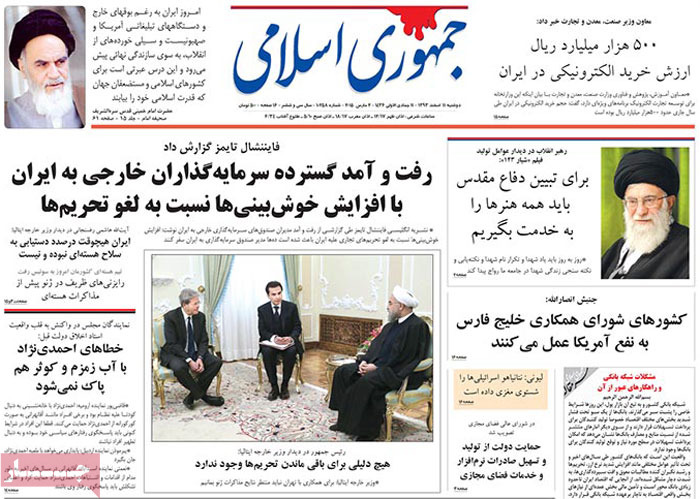 Kar va Kargar: “We need to keep talking about the Sacred Defense even 50 years from now,” said the Supreme Leader.

Ayatollah Seyyed Ali Khamenei made the comment at a meeting with those involved in the production of Track 143, a war drama. 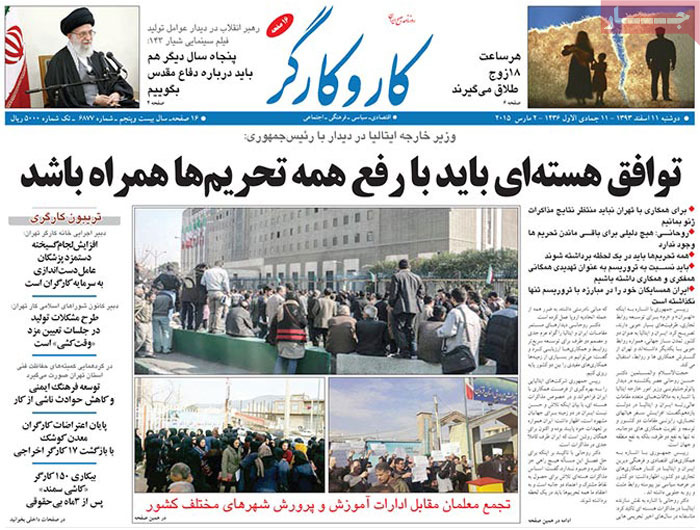 Kayhan: Some 100,000 Pakistani soldiers are to be hired to protect the Saudi Royal Court. 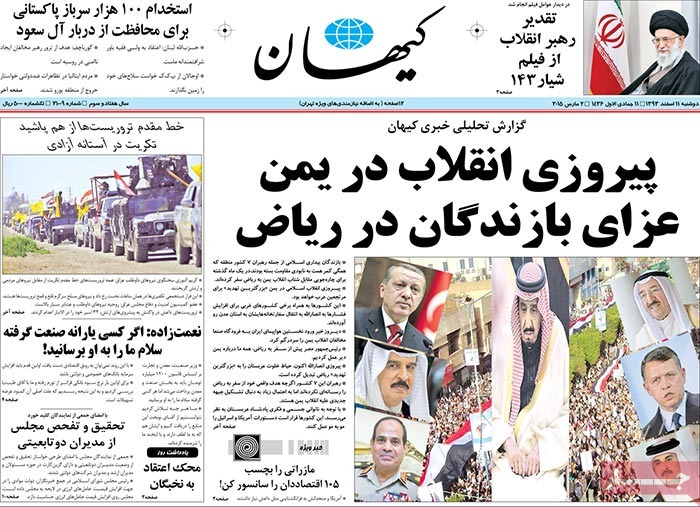 Ayatollah Hashemi Rafsanjani made the comment at a meeting with the visiting Italian foreign minister.

Mardomsalari: “If the other side displays determination, conclusion of a good deal is possible,” said the secretary of the Supreme National Security Council. 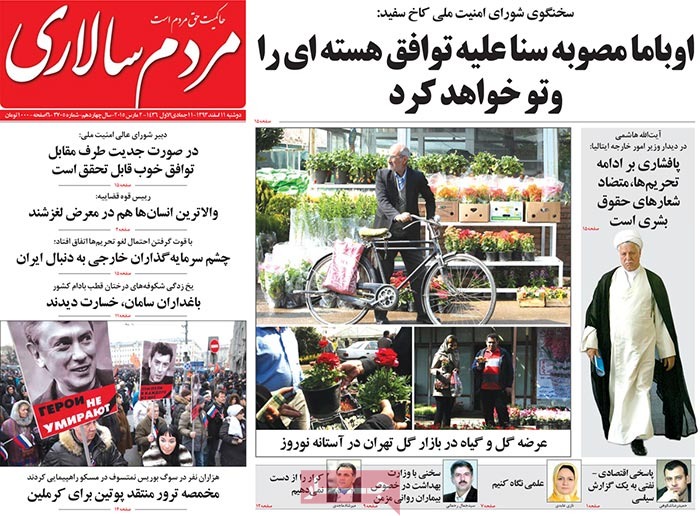 Sharq: The Guardian Council has once again faulted Support for Promoters of Virtue law.