A look at Iranian newspaper front pages on March 16

Reactions to an attack on Ali Motahari, a Tehran MP which forced him to call off a planned speech in the southern city of Shiraz, dominated the front pages of Iranian newspapers on Monday. The announcement by the Judiciary spokesman that a preliminary verdict has been handed down in the case of Mehdi Hashemi, the son of Ayatollah Akbar Hashemi Rafsanjani, and resumption of nuclear talks in Switzerland were also in the news.

Abrar: “Iran is among the leading countries in the world when it comes to clampdown on maritime terrorism,” said the commander of the Iranian Navy. 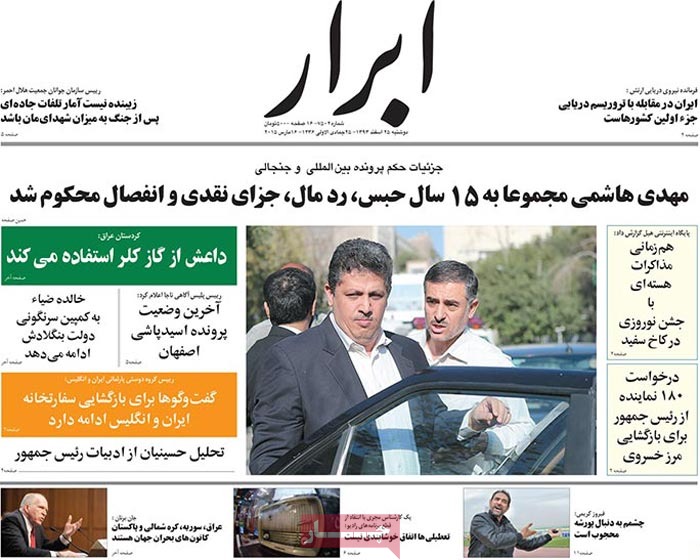 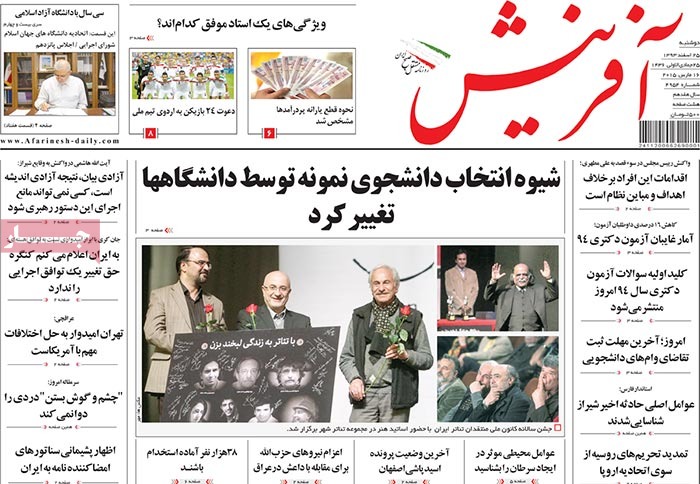 Afkar: Antonov 140 does not have permission to take off. 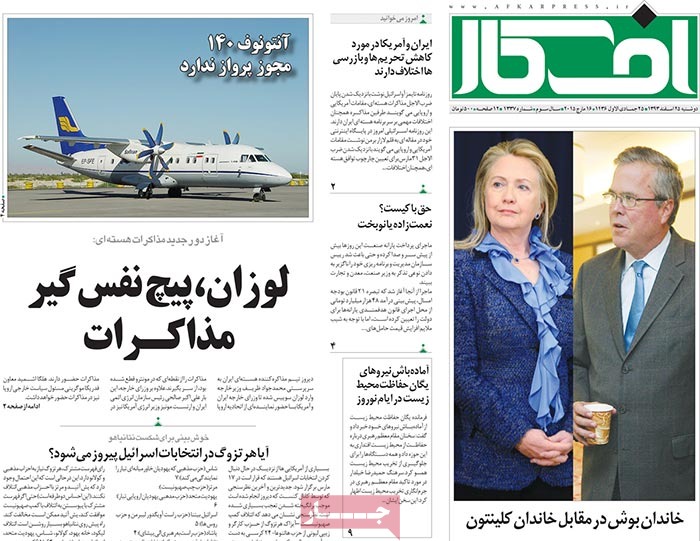 Aftab-e Yazd: “Extremism has not been seriously dealt with,” said the chairman of parliament’s Judicial Committee in reaction to an attack on a Tehran MP in Shiraz.

“Treating the son of a martyr this way is below the dignity of the establishment,” Ayatollah Hashemi Rafsanjani said.

“Such measures cannot be justified in any religious or revolutionary way,” said Parliament Speaker Ali Larijani.

“There are suspicions that the governor’s office acted in cahoots with the attackers,” said Hamid Ansari, who leads the institute that publishes the works of the late Imam.

“Officials who are to blame should be prosecuted [for dereliction of duty],” said President Rouhani.

The comments came as the car of Ali Motahari’s attorney was vandalized in Shiraz. 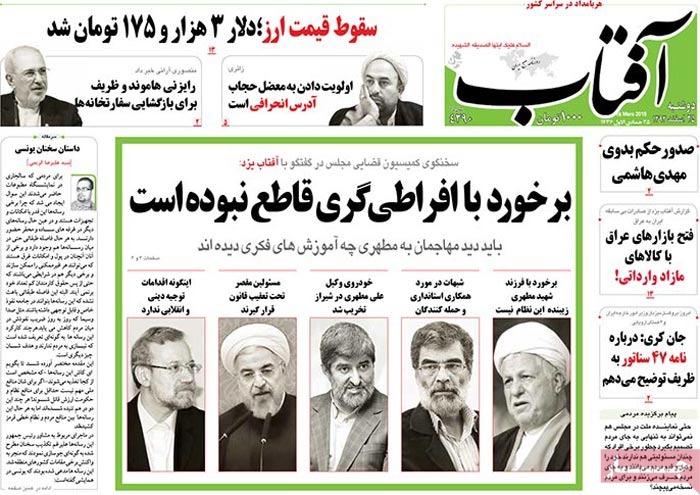 Arman-e Emrooz: “The attack on Motahari was outrageous,” said the chairman of the Expediency Council.

Ayatollah Hashemi Rafsanjani made the comment in reaction to the attack on Tehran principlist MP Ali Motahari in the southern city of Shiraz last week. 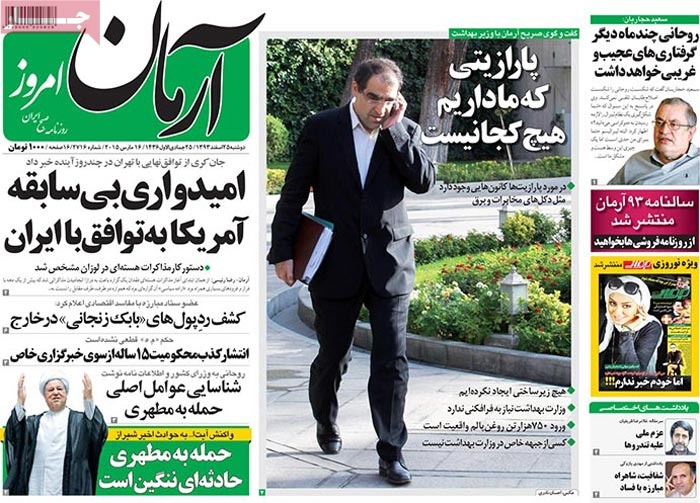 Asr-e Iranian: The strange stance of the parliament speaker on the Additional Protocol

Any inspection beyond the provisions of the NPT will be possible only after sanctions are lifted. 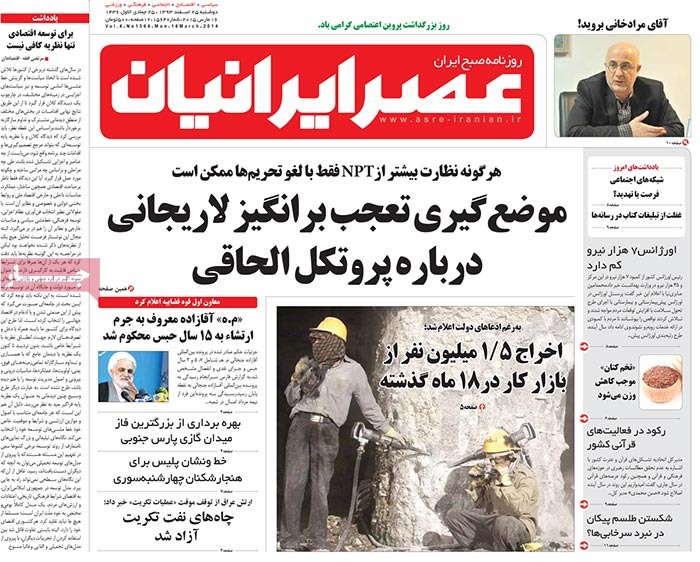 Asrar: Mehdi Hashemi has been fined and sentenced to jail term.

Asrar: Former Egyptian diplomat Mohamed ElBaradei has revealed that Saudi Arabia paid $3 billion in bribes to Al-Azhar to release a statement and condemn the presence of Shiite militiamen in the fight against IS terrorists. 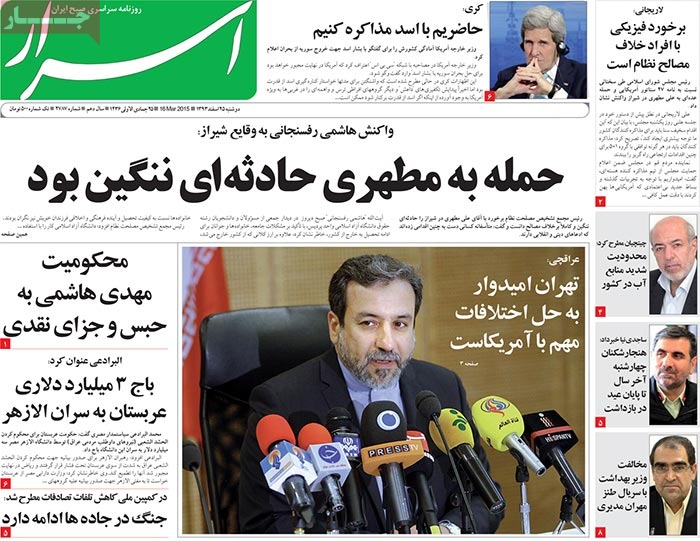 Ebtekar: The largest phase of South Pars gas field to be inaugurated. 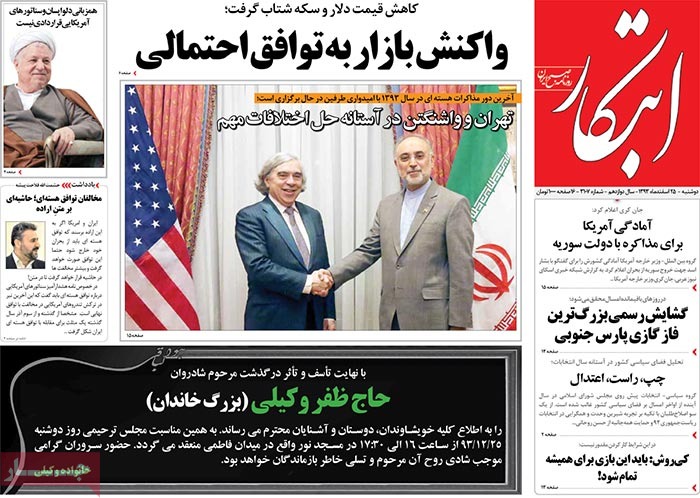 Etemad: “The verdict in Mehdi Hashemi’s case is not final and can be appealed,” said the Judiciary spokesman. 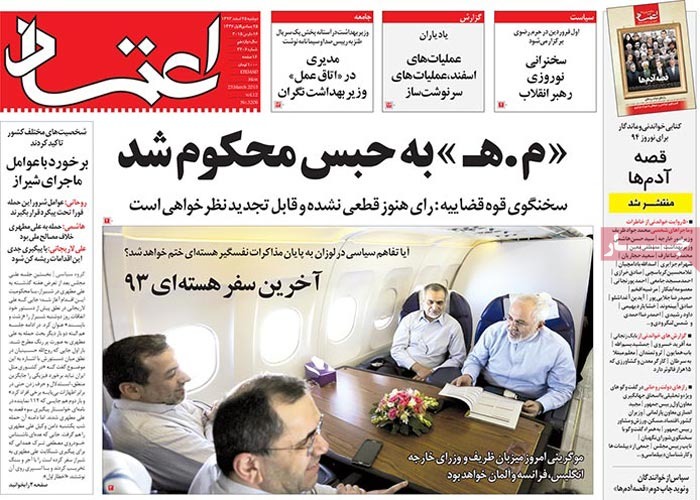 Ettela’at: “Removal of sanctions is on the agenda of the talks,” said Iranian Foreign Minister Mohammad Javad Zarif. 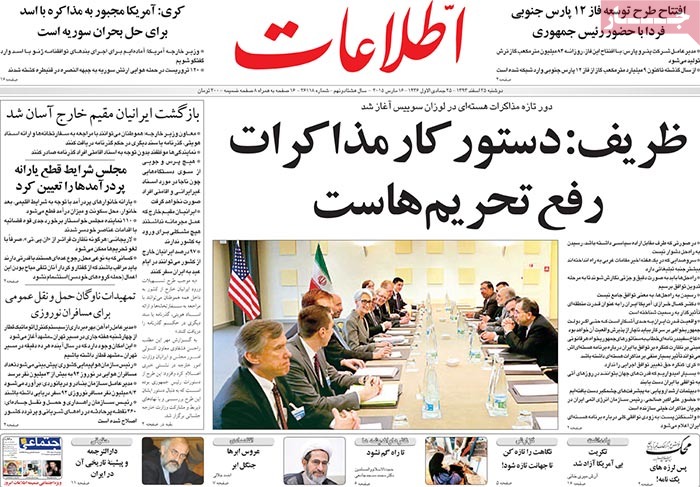 Hamkarie Melli: [Renowned actor] Parviz Parastooi is to auction off his prizes to help those who have no guardian to look after them. Hemayat: “Any deal should be approved by the UN Security Council,” said Iranian nuclear negotiator Abbas Araghchi of a possible agreement between Iran and P5+1.

Hemayat: Following the amendment of a budget bill clause by parliament, payment of cash subsidies to the rich will definitely stop next year. 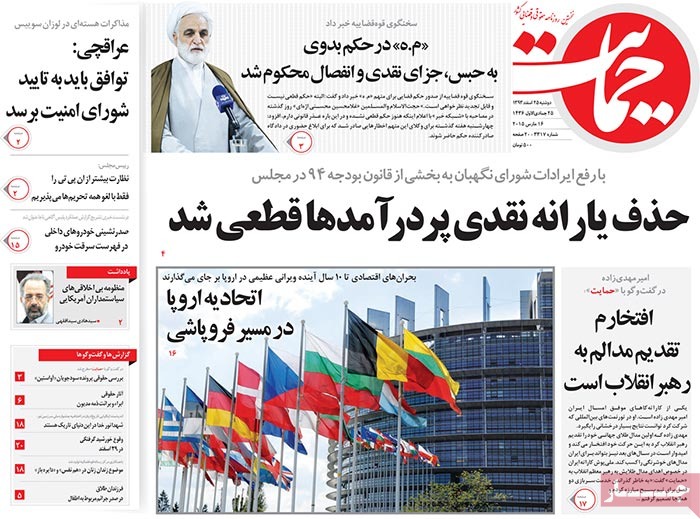 Jomhouri Islami: IS is preparing to retreat from Mosul. 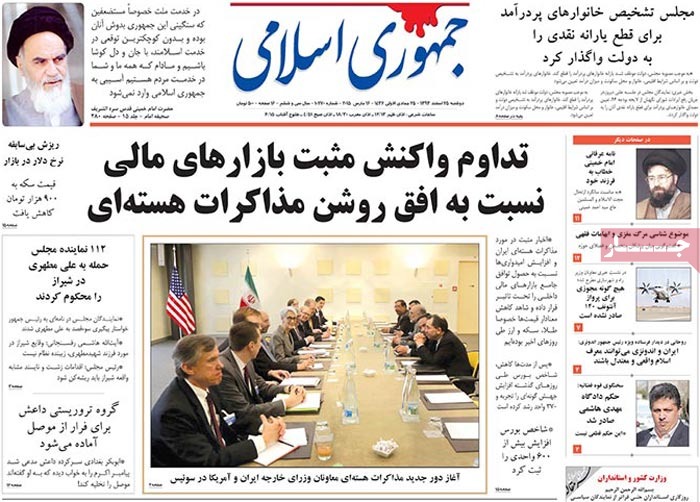 Kayhan: Some 109 MPs have called on President Rouhani to dismiss his adviser Ali Younesi for his controversial comments. 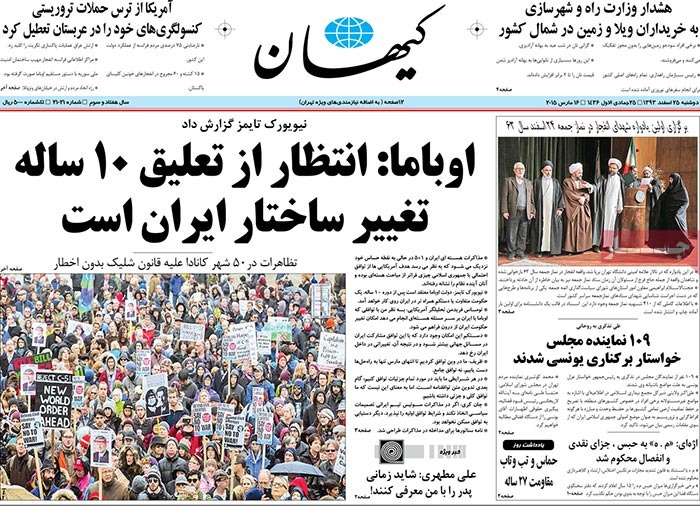 Mardomsalari: The Iranian nuclear chief and the US energy secretary have met in Lausanne. 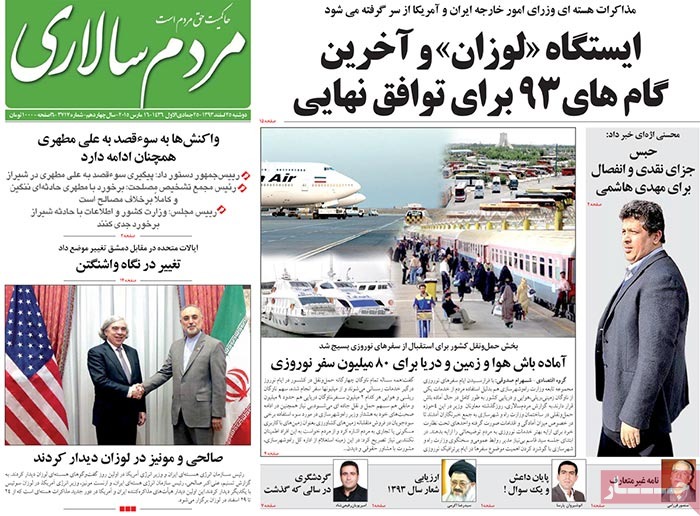 Rah-e Mardom: The value of the greenback has fallen against the Iranian rial. 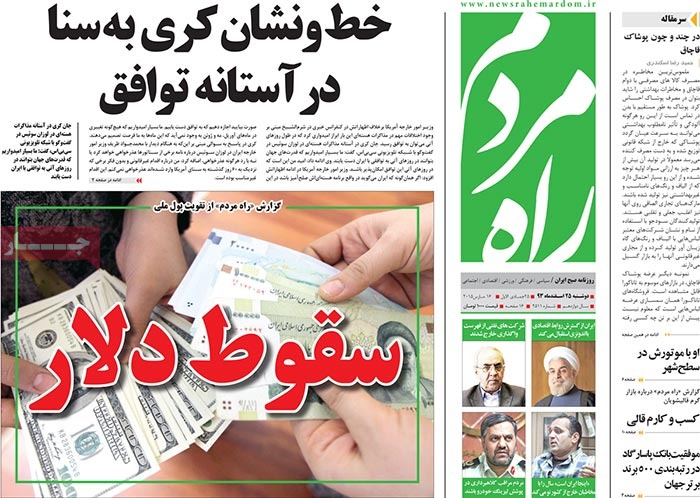 Sayeh: Iran to host a 2016 meeting of the World Crafts Council–Asia Pacific Region. 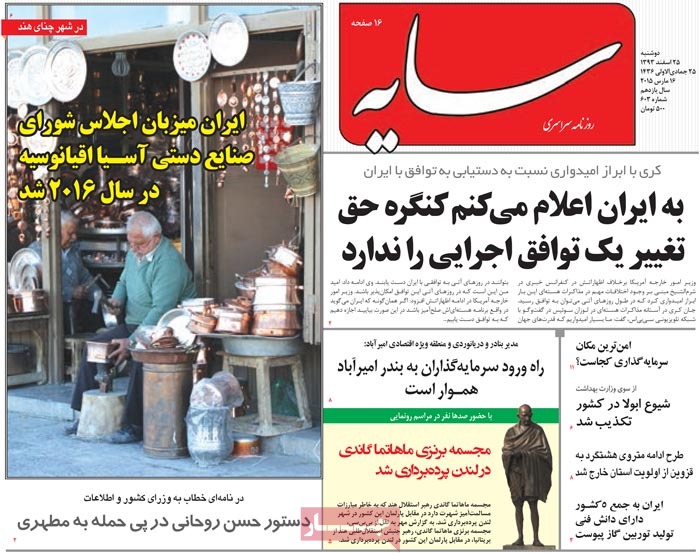