A look at Iranian newspaper front pages on Feb. 28

The Qom visit of President Rouhani which featured meetings with senior clerics and their support for the president’s handling of the country’s affairs along with the conclusion of the naval war games of the Islamic Revolution Guard Corps dominated the front pages of Iranian newspapers on Saturday.

Abrar: “Remarkable progress was made in the most recent round of talks in Geneva,” said Majid Takht Ravanchi, the Iranian deputy foreign minister. Arman-e Emrooz: The Turkish Foreign Ministry has described a visit by former President Mahmoud Ahmadinejad to Turkey as personal and unofficial.

Arman-e Emrooz: A few candidates are running for the chairmanship of the Assembly of Experts. 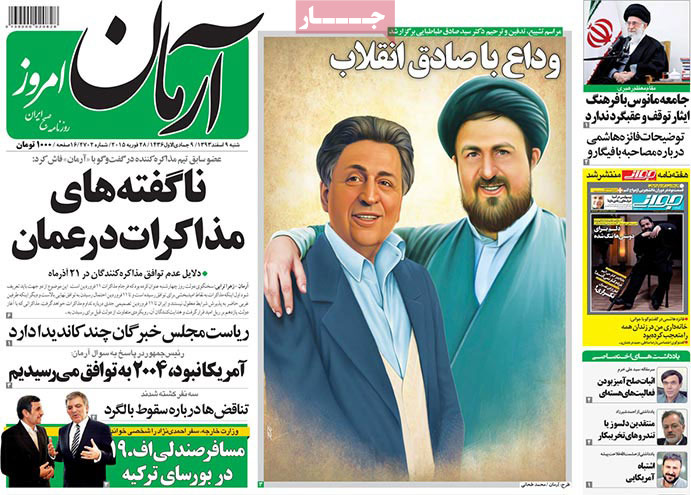 Asrar: “We got good results in talks with the US,” said the director of the Atomic Energy Organization of Iran. 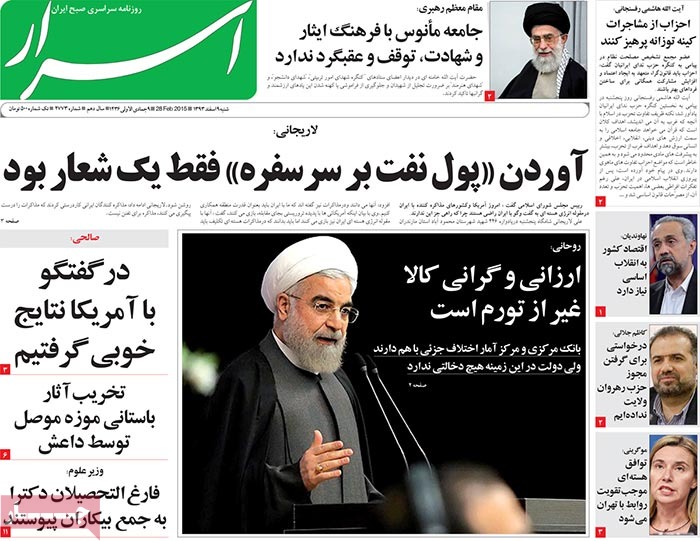 Ebtekar: The clergy throw their weight behind the president.

Senior clerics based in Qom and Friday prayer leaders have said that they support President Rouhani. 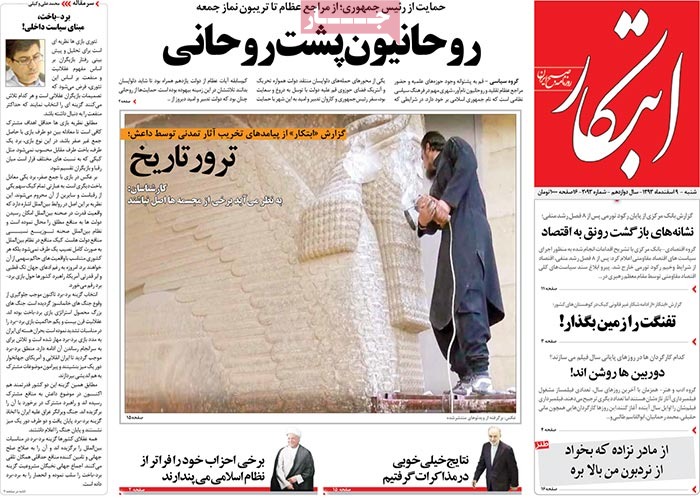 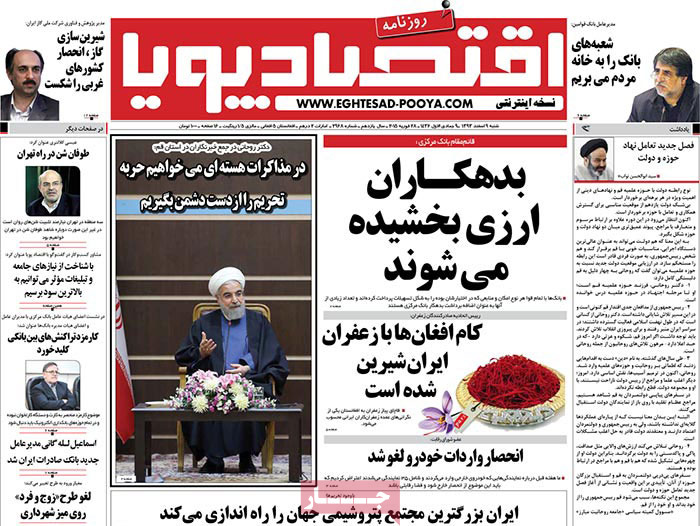 Emtiaz: “The average age of stroke has decreased,” said the deputy health minister. 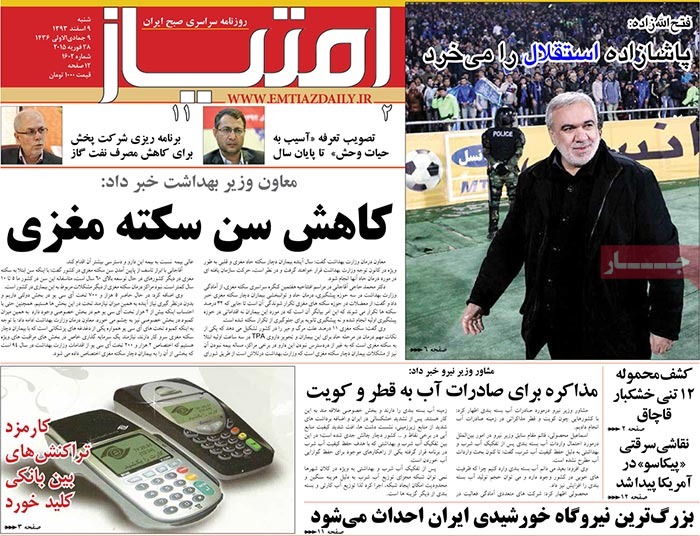 OPEC is likely to have an extraordinary meeting. Ettela’at: The next meeting of Iran and P5+1 will be held in Switzerland. 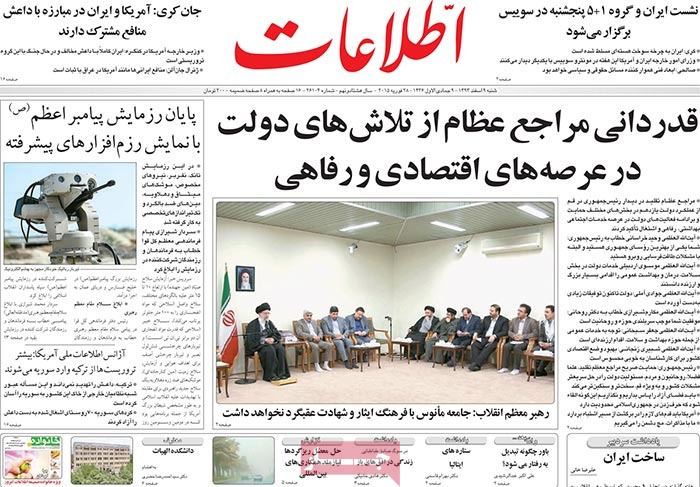 Farhikhtegan: “The promise to take oil money to the houses of people was just a slogan and a mistake,” said Parliament Speaker Ali Larijani. 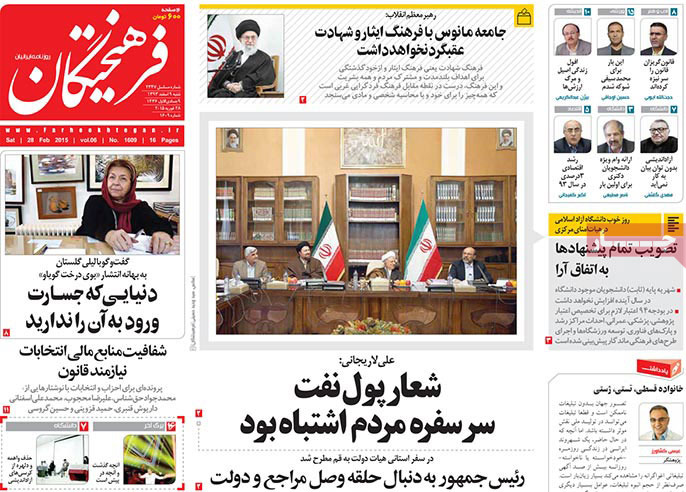 Hambastegi: “The US should reverse the missteps it has taken,” said President Rouhani. 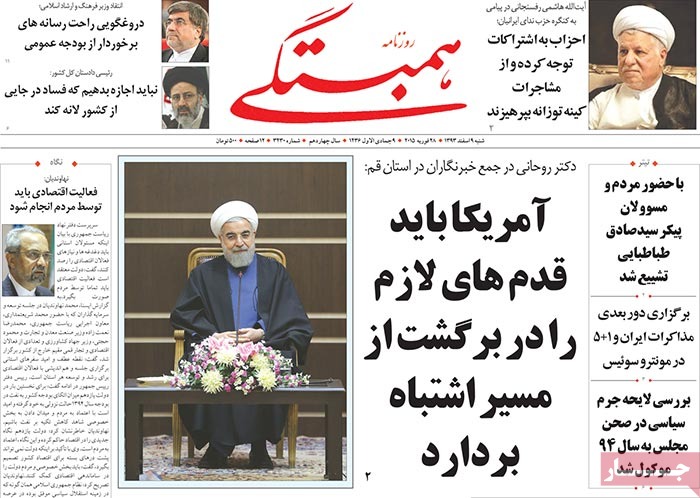 Hemayat: “The country owes its scientific progress to Jihad and martyrdom,” said the Supreme Leader.

Hemayat: Abu Bakr al-Baghdadi is said to have fled Iraq. 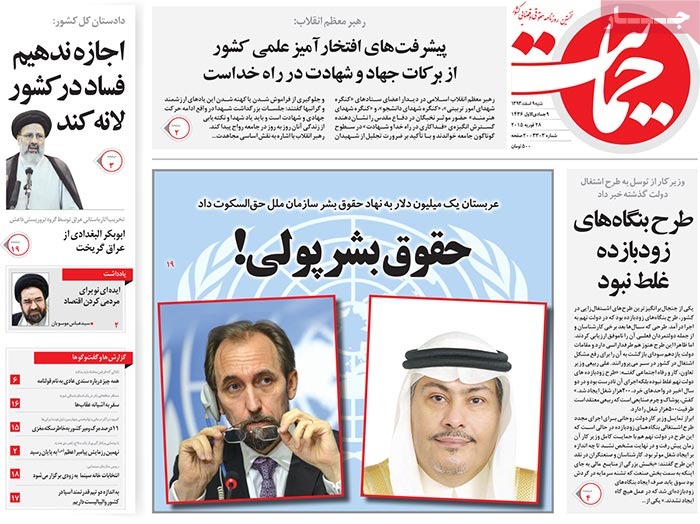 Iran: IS has sledge-hammered the Mesopotamian civilization. 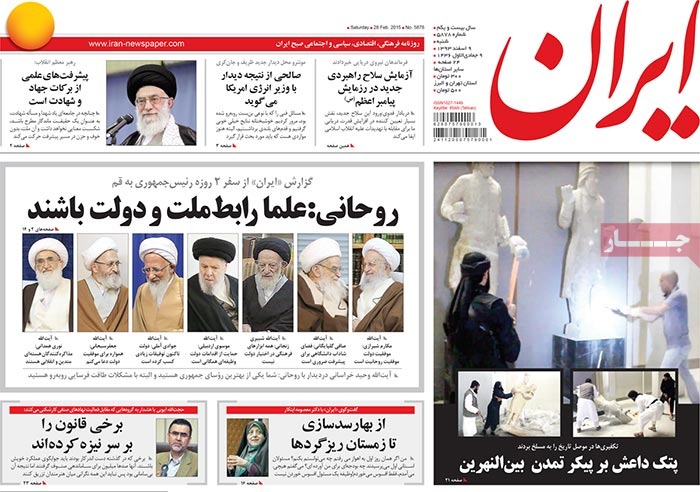 Jamejam: Car imports are no longer a monopoly. 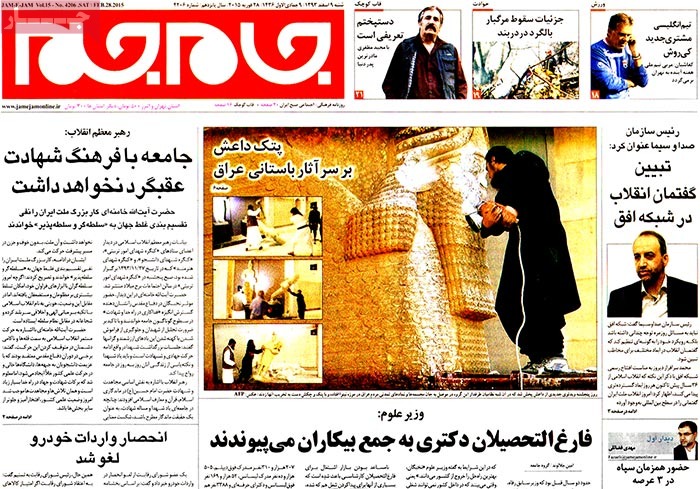 Jomhouri Islami: New strategic naval weapons have been tested in the Great Prophet maneuvers in the south. 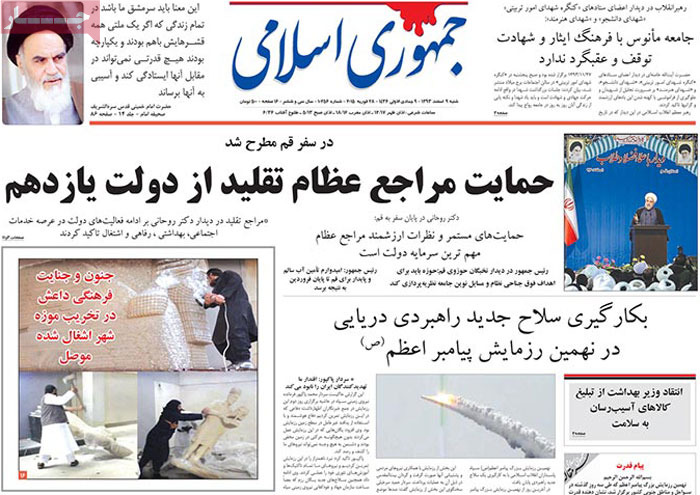 Kayhan: Some 24 percent of the country’s drinking water is wasted. 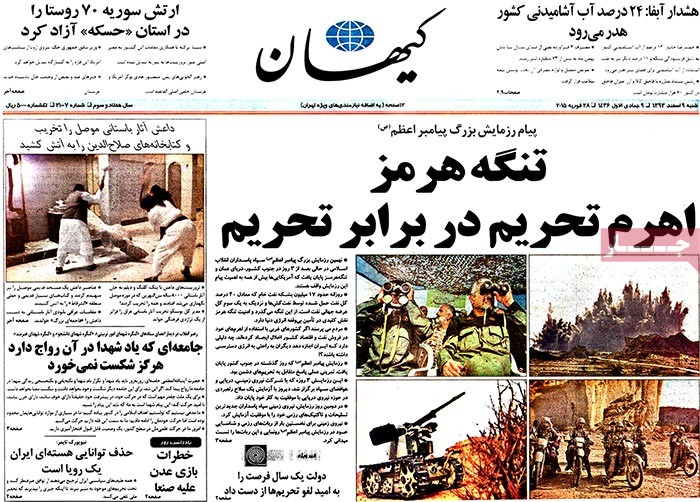 Mardomsalari: Seyyed Sadegh Tabatabai has been laid to rest in the mausoleum of the late Imam Khomeini. 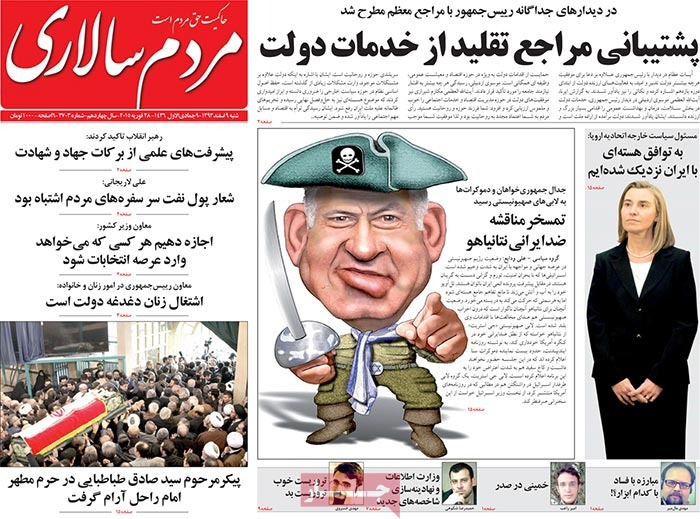 Sharq: “We could have reached a deal with Europe in 2004 had it not been for the US,” said President Rouhani. 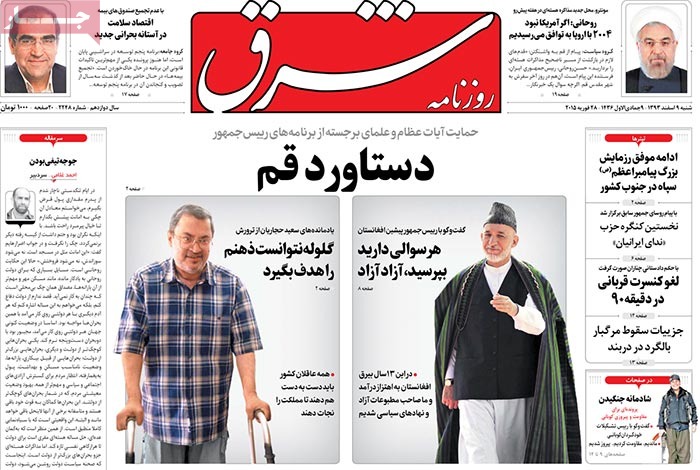 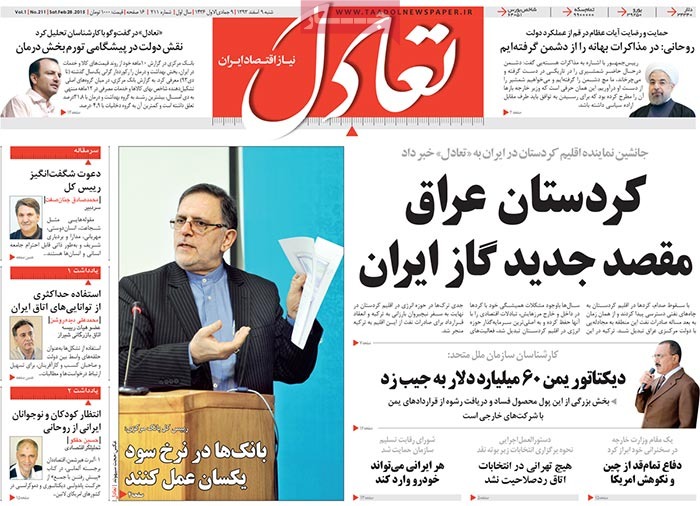