A look at Iranian newspaper front pages on April 21

IFP has taken a look at the front pages of newspapers on Tuesday and picked headlines from 9 of them. IFP has simply translated the headlines and does not vouch for their accuracy.

President Rouhani’s comments at meetings with the new ambassadors of Greece, Algeria, Senegal and Thailand dominated the front pages of Iranian newspapers on Tuesday. A gathering in Tehran in which Iranian Foreign Ministry officials answered the questions of those critical of the Lausanne statement also appeared on the covers of several dailies.

Abrar: The Israeli reporter [who visited Iran on her American passport] was not a spy. 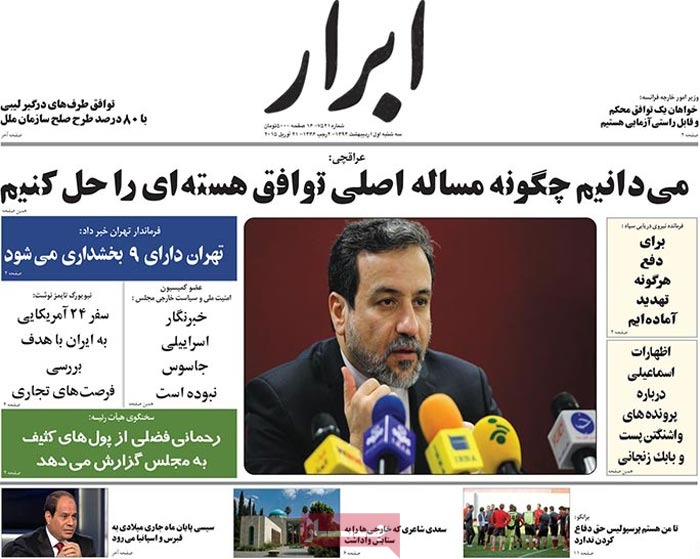 Aftab-e Yazd: Some critical comments about the Lausanne statement stem from lack of information.

Iranian nuclear negotiator Seyyed Abbas Araghchi said that at a gathering on the tentative nuclear deal Iran and P5+1 struck in the Swiss city in early April.

The move came after parliament required the Executive to stop the handout.

The economy minister has said the number of individuals taken off the list is not substantial. 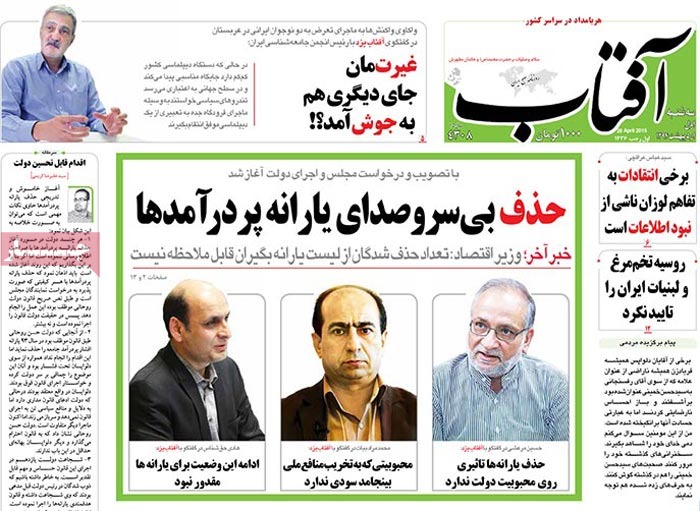 Arman-e Emrooz: The Chairman of the Expediency Council says he prefers presidential democracy to parliamentary democracy.

[The comment by Ayatollah Hashemi Rafsanjani came after the idea of reviving premiership was floated.] 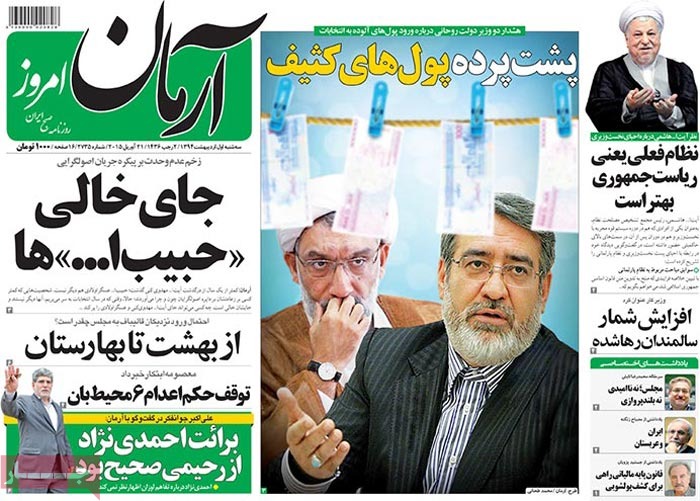 Ebtekar: Iran and Venezuela are coordinating efforts to stabilize the oil market.

Iranian Foreign Minister Mohammad Javad Zarif made the comment at a joint press conference with his Venezuelan counterpart.

Ebtekar: Tehran issues an oil warning to Riyadh. The time of crude price decline is up. 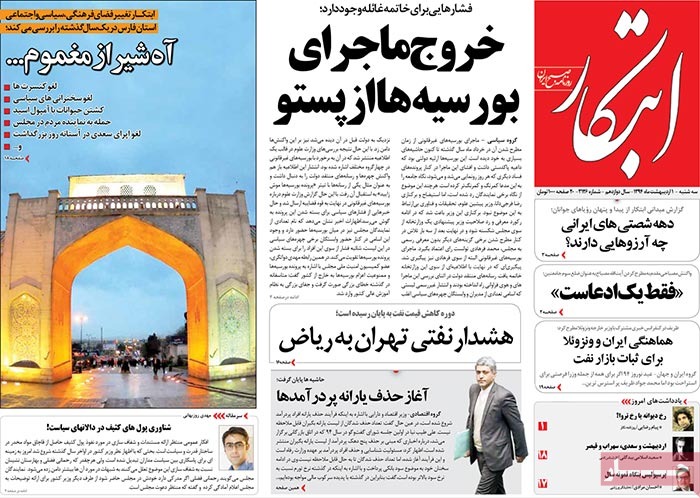 Esfahan Emrooz: Students in Isfahan have developed a spherical robot. 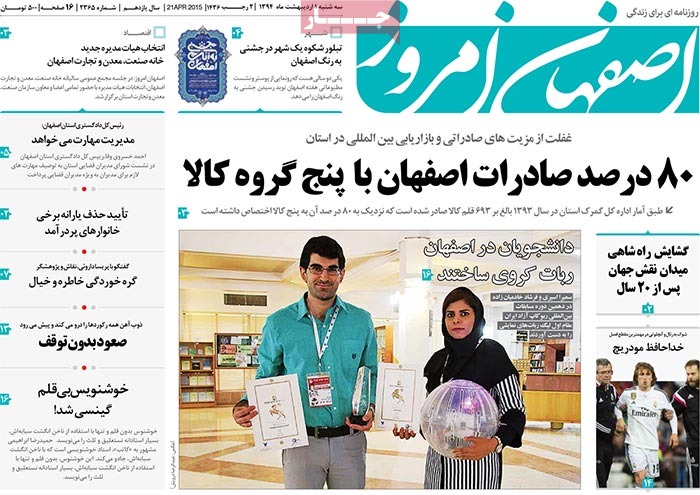 Hassan Rouhani made the comment at separate meetings with four new foreign ambassadors who met him on Monday to hand in their credentials.

Ettela’at: “If the talks had not been moving forward in our favor, the US Congress would not have tried to sabotage the process,” Iranian nuclear negotiator Abbas Araghchi said. 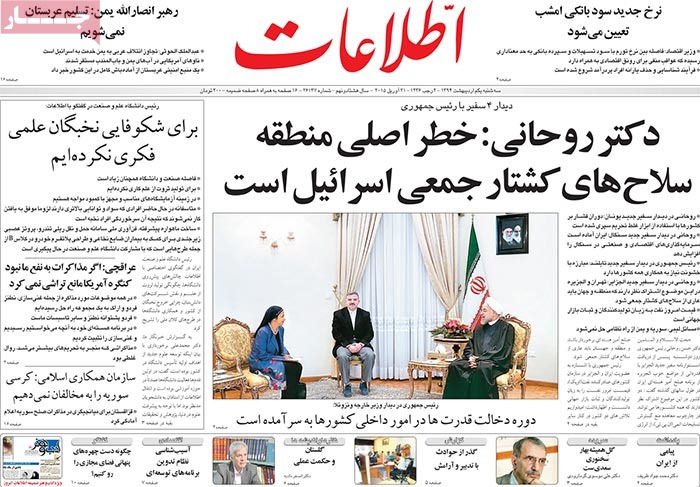 Javan: Hamid Reza Kamali, an Iranian racing champion, has died in a car accident on a Tehran highway.

Javan: “Some 21 percent of marriages lead to divorce in less than five years,” said a deputy minister of sports. 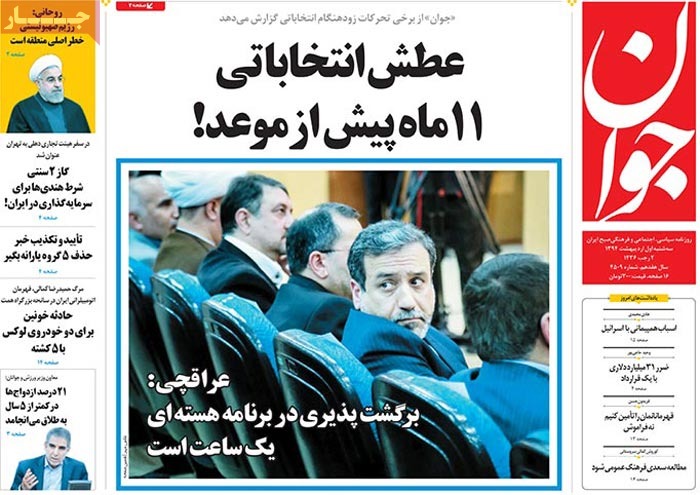 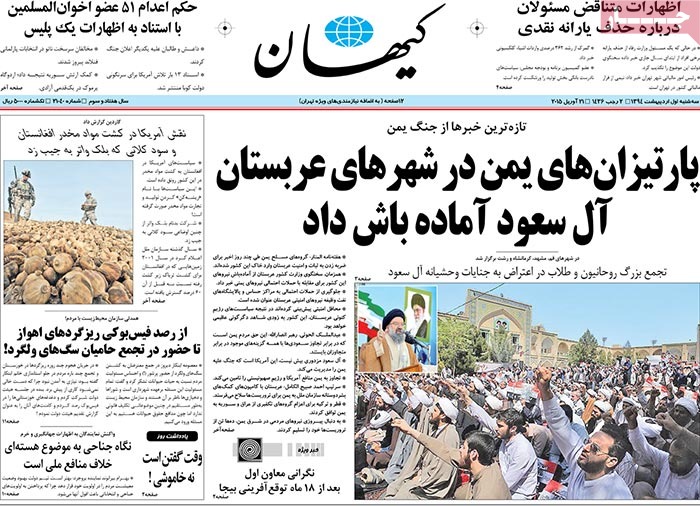 Shahrvand: “There are some 1.5 million illegal Afghans in Iran,” said the Afghan minister of refugees in an exclusive interview with the daily. 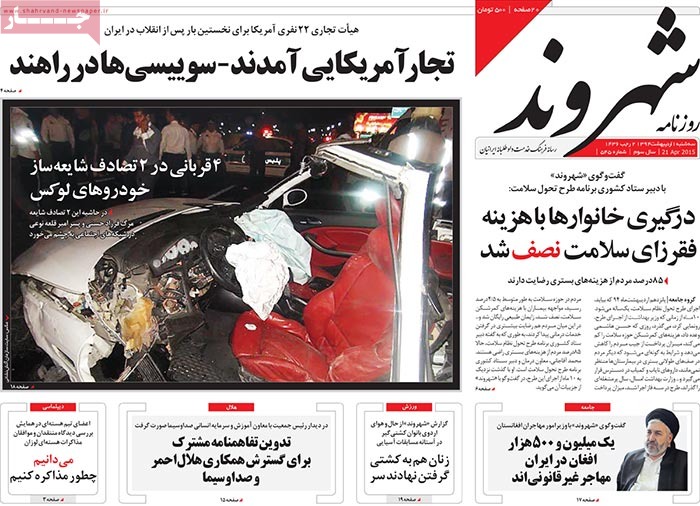