A look at Iranian newspaper front pages on April 14

Comments by the Judiciary spokesman at a news conference about a wide range of issues, from cases involving land grab and three officials who served in the government of Ahmadinejad to Washington Post correspondent Jason Rezaeian dominated the front pages of Iranian newspapers Tuesday. The championship of the Iranian freestyle wrestling team on American soil and suspension by Iranian officials of the Minor Hajj pilgrimage also appeared on the covers of the dailies.

Abrar: Thirty MPs have signed a petition that calls for impeachment of the minister of roads.

The announcement was made by the chairman of parliament’s Development Committee.

Abrar: Foreign Minister Zarif is on a European tour that has taken him to Spain. Next step is Portugal. 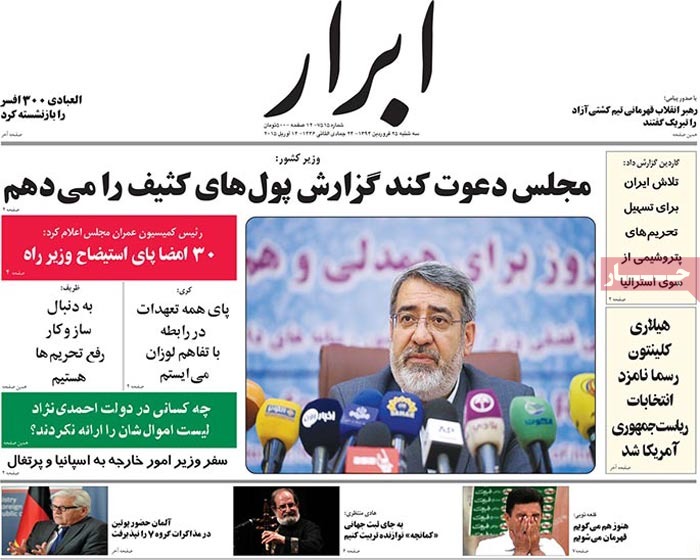 Afarinesh: The unconstructive stance of some negotiating parties is interfering with conclusion of a nuclear deal.

The comment was made by Secretary of the Supreme National Security Council Ali Shamkhani.

Afarinesh: The minister of culture and Islamic guidance has said Minor Hajj pilgrimages have been suspended. Afkar: Hossein Amir-Abdollahian, an Iranian deputy foreign minister, has called for greater international resolve in the fight against terrorism. 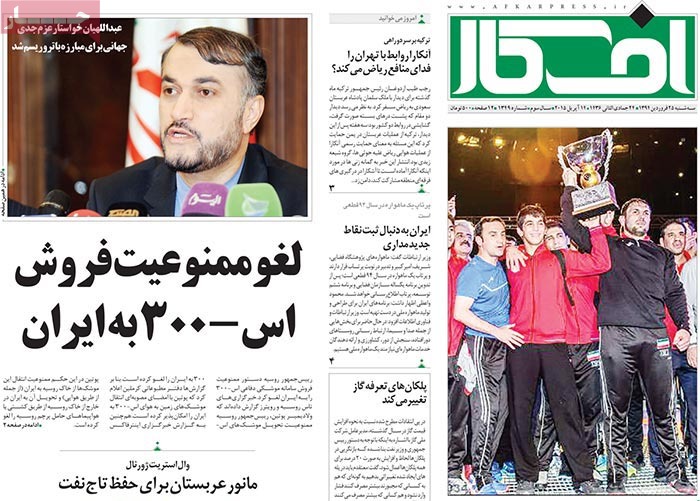 Aftab-e Yazd: Suspension of the Minor Hajj pilgrimage will remain in place until the two Saudi offenders are tried.

The announcement was made by Tehran MP Ali Motahari in an interview with the daily.

He was talking about two Saudi officers who have molested two Iranian teens at Jeddah airport.

Aftab-e Yazd: “I am waiting for an invitation by parliament to talk about the so-called dirty money.”

The comment was made by the interior minister. In response, a member of the chamber’s Presiding Board said, “Invitation is not necessary. Come over.”

Aftab-e Yazd: The ban on the sale to Iran of Russian S-300 missile system has been lifted. 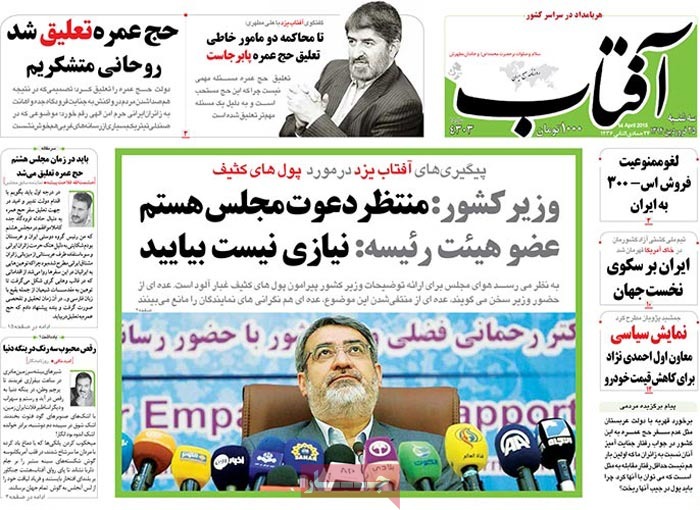 Amin: “Terrorist measures in the east were meant to undermine Iranian nuclear negotiators,” said an MP. 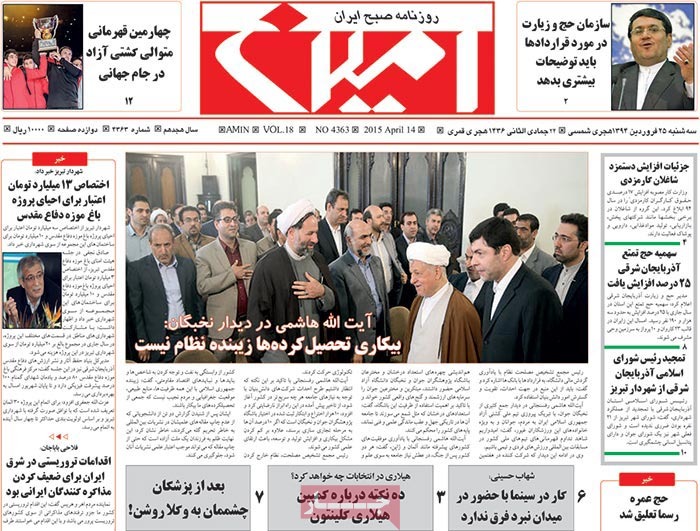 Asr-e Iranian: The interior minister said those behind 90 assassinations and assassination attempts have been arrested. 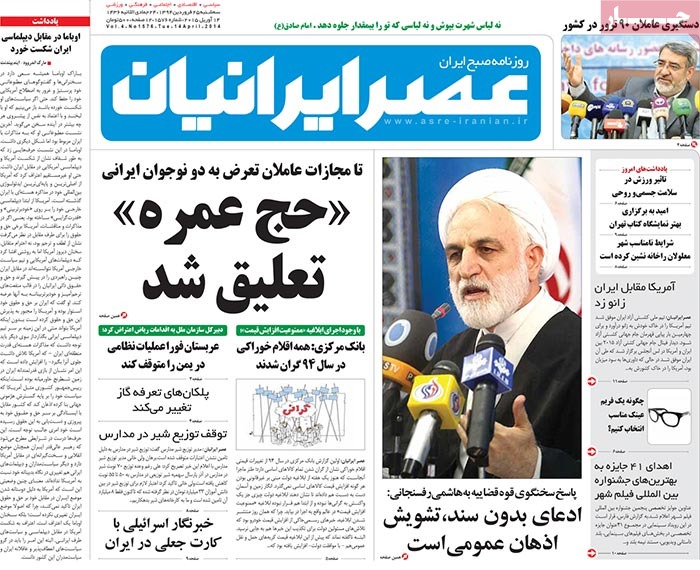 Asr-e Rasaneh: “A new Iranian satellite will be launched this year,” said the minister of communications and information technology. 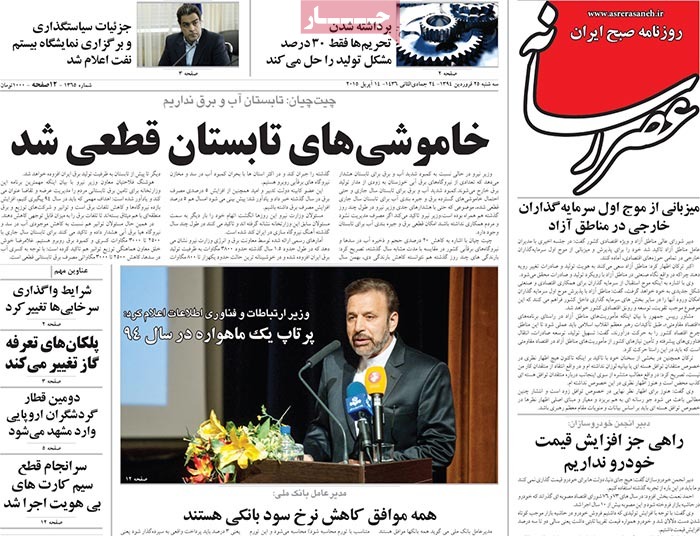 Asrar: “The attack on Yemen was a big plot and a major blunder,” said Iranian Parliament Speaker Ali Larijani.

Asrar: “A bylaw on women’s presence in stadiums is being drafted,” said the interior minister. 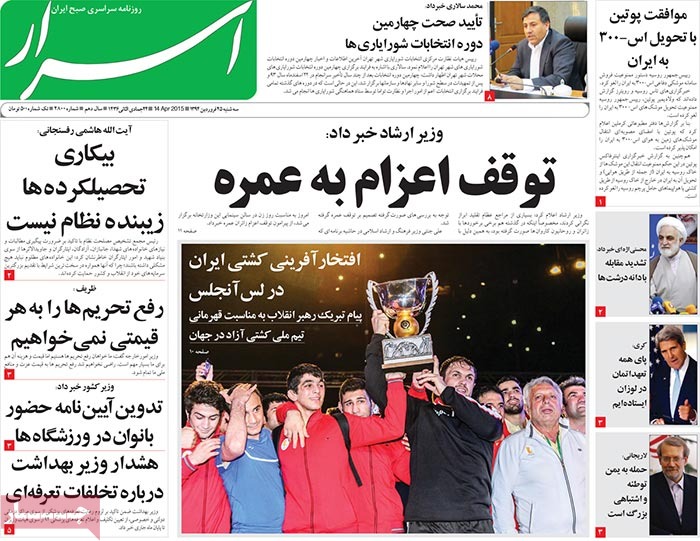 Ebtekar: “We are looking for a mechanism to terminate sanctions,” said Foreign Minister Mohammad Javad Zarif. 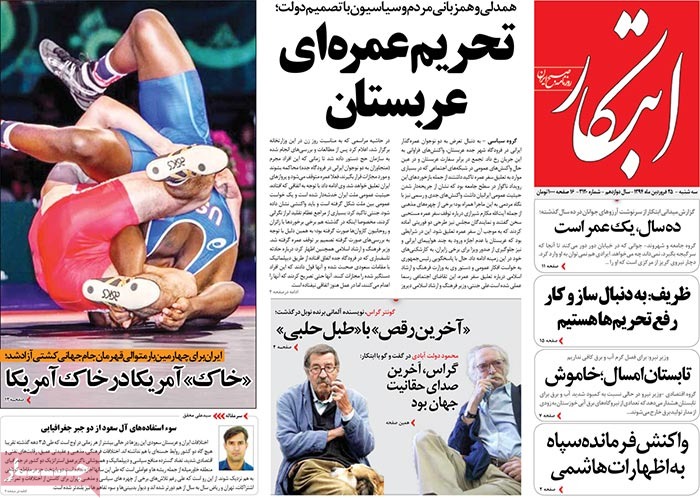 Emtiaz: “There was a drop in the number of marriages registered across the country last year,” said the interior minister. 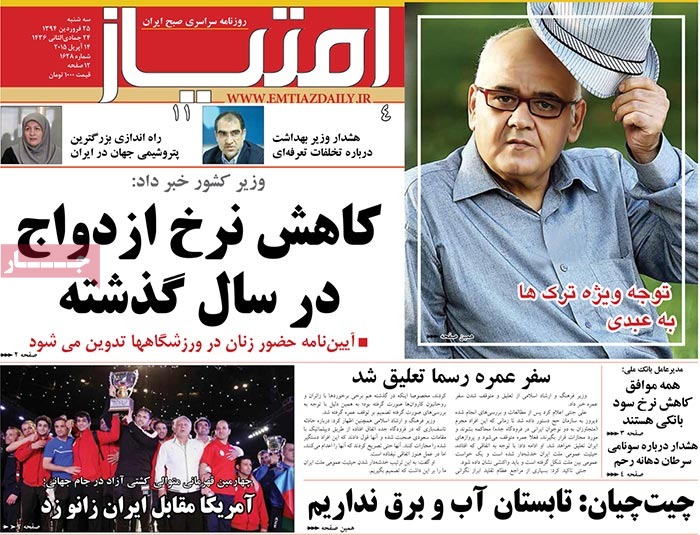 “Calling those who care about the revolution dogmatic stems from a grudge against the value system,” the commander of the Revolution Guards said.

“Leveling accusations with no proof to substantiate them amounts to libel and incitement of the public,” said the Judiciary spokesman. 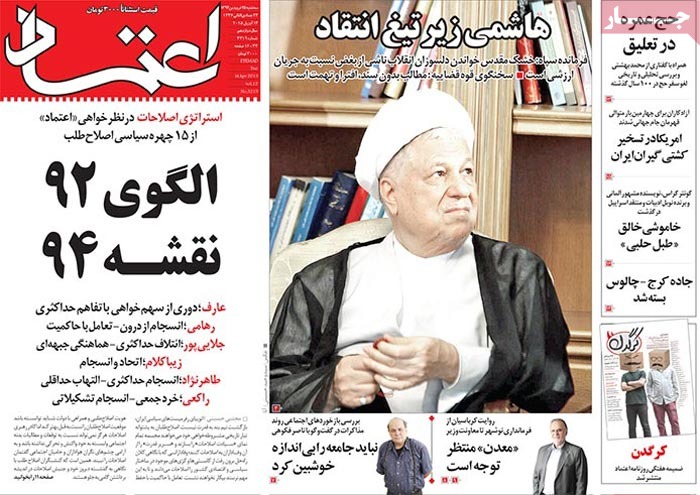 Ettela’at: “Removal of sanctions should not come at the expense of our dignity and national interests,” said Foreign Minister Mohammad Javad Zarif. 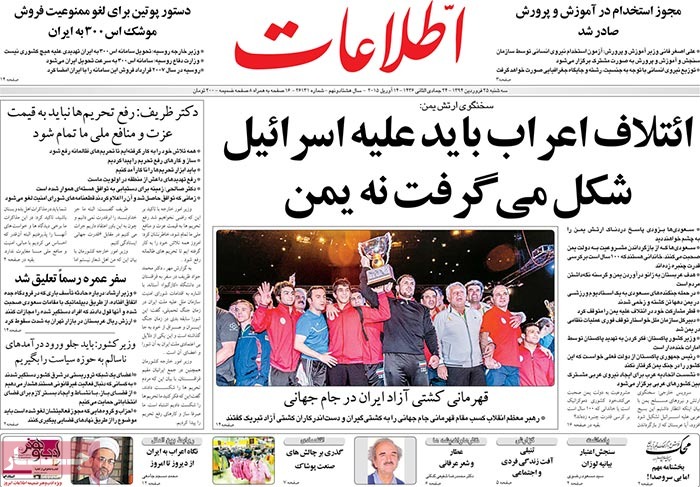 Ghanoon: Gunter Grass, [a Nobel-winning German novelist] has passed away. 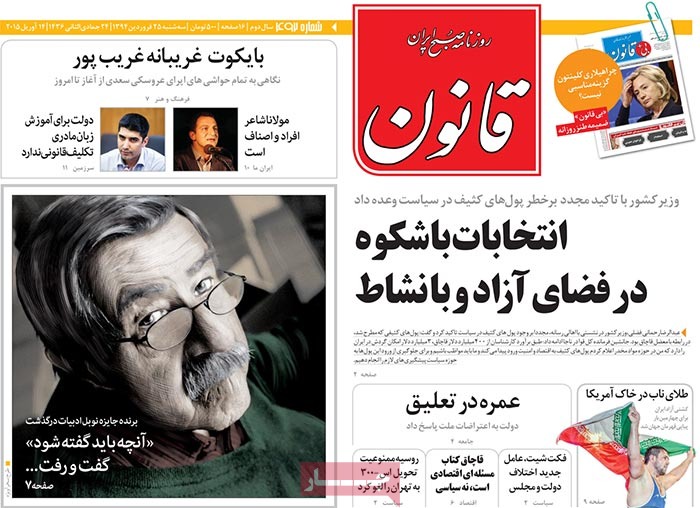 Hemayat: “Crackdown on land grabbers and big shots will intensify this year,” said the spokesman of the Judiciary.

“The case involving the Washington Post reporter [Jason Rezaeian] is in the Revolutionary Court; his lawyers are studying the case,” Gholamhossein Mohseni Ejei further said. 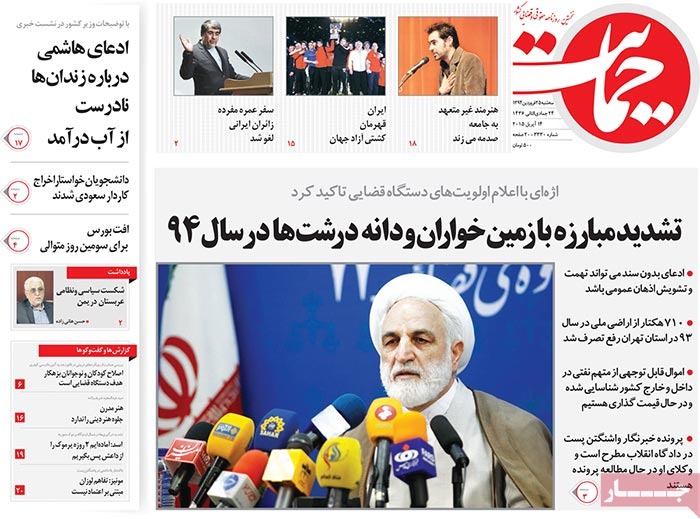 Kaenat: “There is no military solution to the problems of Yemen,” said the Iranian Foreign Ministry spokeswoman. 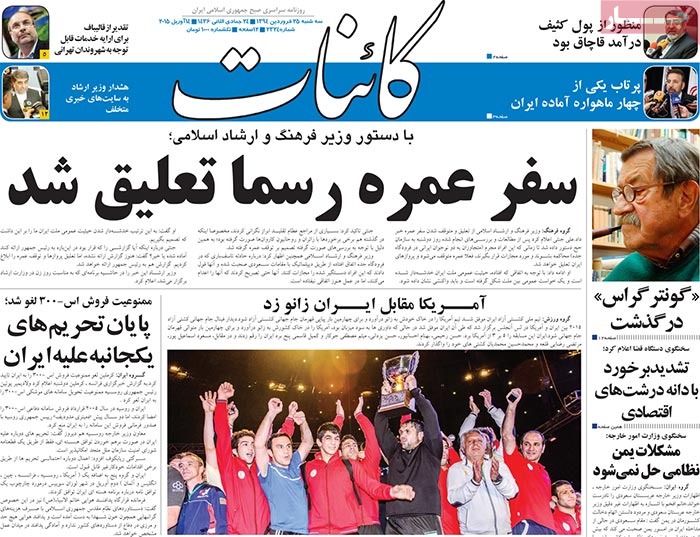 Kayhan: Iranian production of tea is projected to increase 50 percent this year. 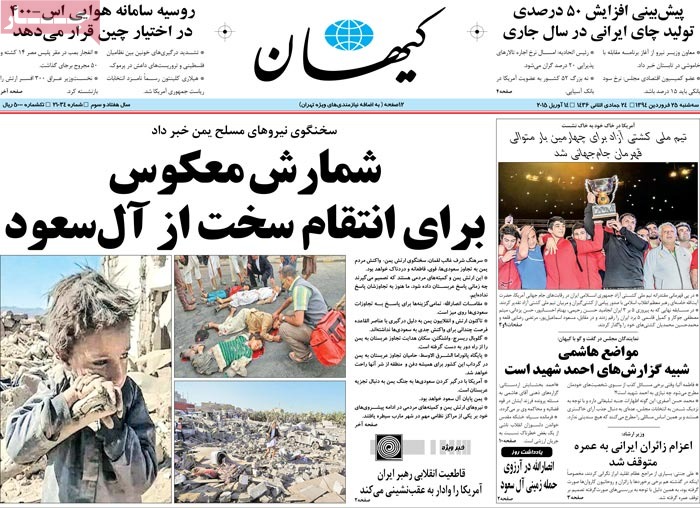 Nasl-e Farda: “The perpetrators of acid attacks in Isfahan have yet to be arrested,” said the Judiciary spokesman. 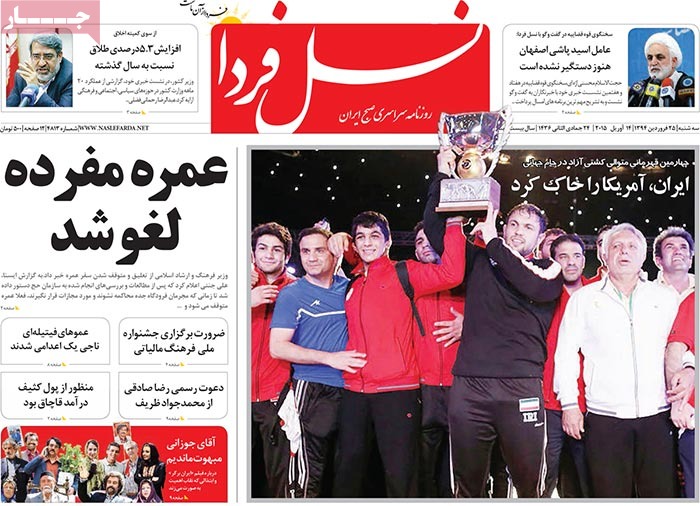 Roozan: There has been no petition for the lifting of a ban on publication and or broadcast of the image of the former reformist president.

The comment was made by the judiciary spokesman at a press conference Monday. Shahrvand: There has been flooding in four provinces.

In some areas, torrential rain has been unprecedented for thirty years. 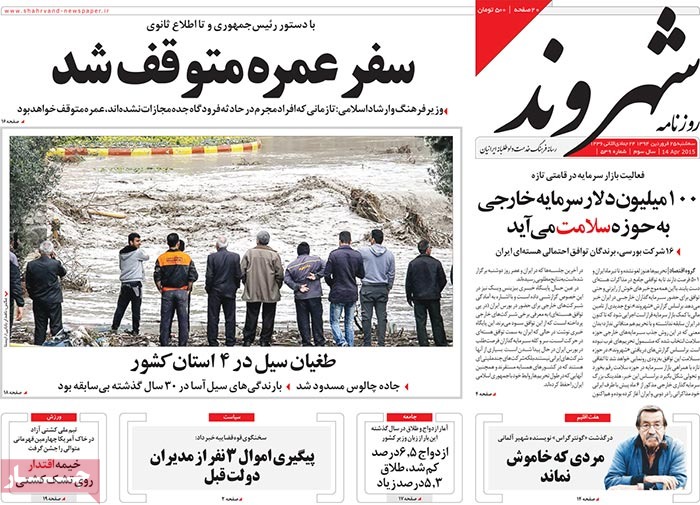 Sharq: “Three officials who served under Ahmadinejad failed to provide a list of their assets and property,” said the Judiciary spokesman.

Sharq: “A bill is being pieced together to make electoral campaign costs transparent,” said the interior minister. 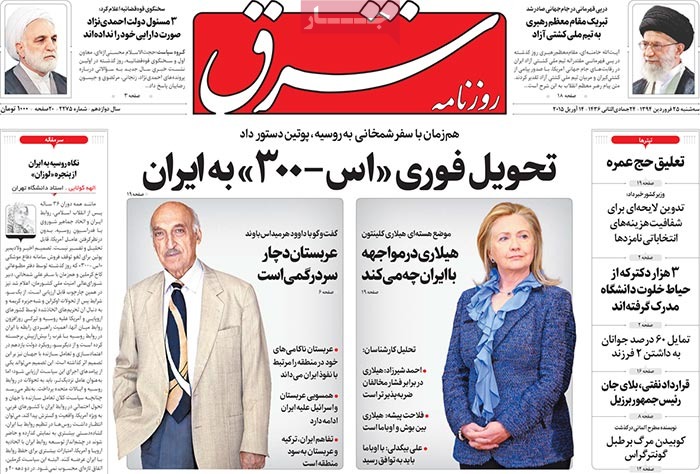