A Look at Iranian Newspaper Front Pages on Apr. 24

Almost all newspapers today covered a recent meeting between Iranian Foreign Minister Mohammad Javad Zarif and his US counterpart John Kerry in New York, where the American side promised to remove barriers to Iran’s trade with Europe.

Iranian media also covered the remarks by Central Bank of Iran (CBI) Chief Valiollah Seif, who blamed the former Iranian administration for a recent US court ruling which seized $2 billion of Iranian assets.

President Hassan Rouhani’s comments on Iran’s role in the fight against terrorism and extremism, as well as his cabinet meeting on the controversial plan of “plainclothes morality” police were also discussed.

2-Kerry: Banks and Financial Institutions Should Not Be Afraid of Dealing with Iran 1- Ahmadinejad to Blame for US Seizure of Iranian Assets 1- American Promise, Iranian Confusion: Will US Keep Its Promises? 2- Iran is Flag-Bearer in Global Fight against Extremism: Rouhani

4- Asghar Farhadi: About Elly Started with a Photo 1- Shocking Confession on Possible Tehran Earthquake: No One Is Ready, Even Rescue Teams

3- We Are Aware of USA’s Domestic Problems: Ayatollah Rafsanjani 1- US Takes Major Steps for Cooperation with Iran 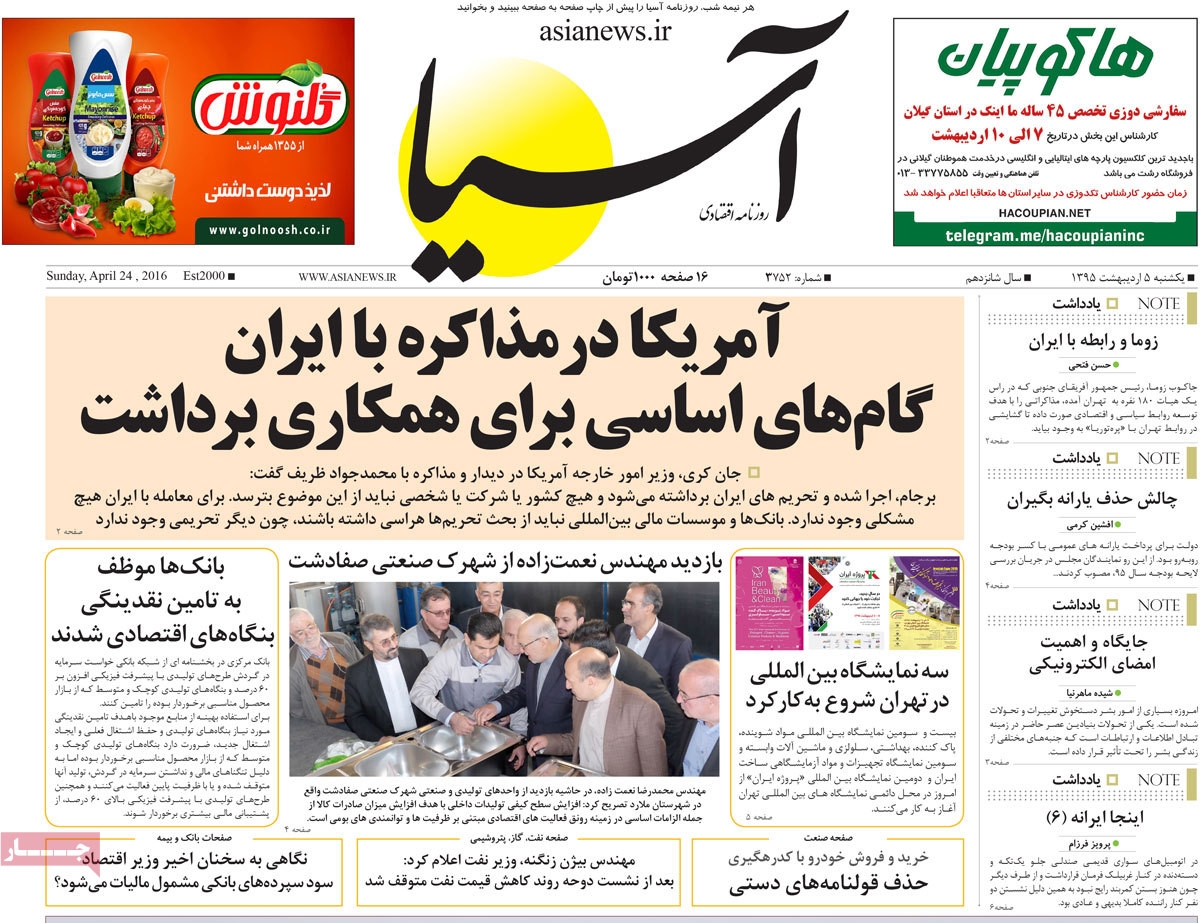 1- If It Was Not for Iran, We Would Be Facing the “Terrorist State of Daesh [ISIS]”: Rouhani

2-Iran to Collect Its Principal Money and Interest from US: First VP

3- Iran Seeks to Interact and Cooperate with the World: Rafsanjani 1- Iran and Azerbaijan Agree on Regulation of Radio Frequency 1- Online Dating for Marriage to Become Legal in Iran! 1-First Call for Dialogue of Civilizations, Interaction of Religions, and World Cooperation against Violence and Extremism Originated from Iran: Rouhani 1-Iran Resumes Export of Saffron to US after 15 Years 1-President “Tweets” Iran’s Might to the World: Rouhani Shows Off Iran’s Regional Policies

2-The Gift Ahmadinejad Gave to US: Purchase of Bonds from “Hostile” Gov’t

3-Playing with Britain’s Cards in EU: A Reflection on US Opposition to Brexit 2-Price of Imported Medicine Down by 18% 2- Sustainable Development Not Possible without Peace and Moderation: Rouhani 1- People’s Health Up for Auction in Beauty Salons

2- Negotiations to Put an End to Yemen’s Hiroshima 1-US and EU Passing JCPOA Back and Forth: Kerry Wants European Firms to Consult Washington before Cooperation with Iran

2- Sale of Iran’s Heavy Water to US “on Credit”

3-Mass Execution in US State of Ohio 2-Saudi Regime’s Attacks on Yemen Must Be Stopped: UN Envoy 1-Feigning Patriotic Fervour while Begging Americans: Result of Seeing US as the “Boss” 1- Missiles and Diplomacy: Interwoven and Interconnected 3- Differences between Iran and US Still Exist: FM Zarif 1-Kerry Warns against End of Ceasefire in Syria

3- Environment, Key to Unity among All Religions: President Rouhani 1- Telegram Is No Place to Find Your Spouse: Experts Warn