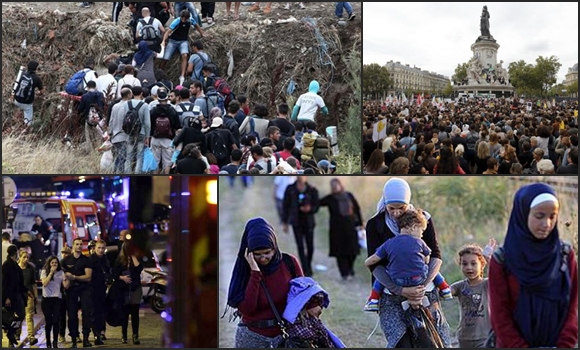 An Iranian researcher has said that Iran is to surmount a historical bend, adding if the country becomes successful, it will overcome the next bends more easily.

Two important events played out last week: In a meeting with Iran’s Supreme Leader, Russian President Vladimir Putin offered a copy of the holy Koran to Ayatollah Khamenei, and France’s far-right National Front Party leader Marine Le Pen said in the European Parliament that Western governments should change their attitude toward the Arab world which represents Islam and adopt a new approach to Iran as a replacement for Arabs.

In Iran, we can have tandem interpretations of that deed [Putin’s gift to the Supreme Leader] and these words [by Marine Le Pen].

Sharq daily on November 29 published a piece by Ali Moujani, a researcher of the history of foreign relations, on the West’s new approach toward the world of Islam, including Iran. Moujani has enhanced his knowledge about orientalism and Islamology in Russia over the past two decades. While in Paris, Moujani was given the chance to have an interview with Ms. Marine Le Pen and her father. The following is the translation of part of that piece:

A look at the Russian media shows that Putin has tried to tell his audience in Russia – especially the Muslim community – that the world of Islam does not have only one religious authority, and that Iran too can be a key and influential source for Muslims in Russia, irrespective of their previous models which historically viewed Sheikh ul-Islam or the Grand Imam of al-Azhar as their religious authority.

In the rightist mindset, Iran serves as an anti-Arab tool, and not a reliable ally or partner. Such a frame of mind develops against a backdrop of mounting panic in a society which watches an Arab brother sit at a café or restaurant in France, Germany, Belgium, the Netherlands, Italy and Spain with a hookah placed to his lips, speaking Arabic.

What is our duty in such circumstances? Are we supposed to develop an interest in such remarks? We need to take into account the fact that misinterpretation of such behaviors and attitudes can cause hidden hands to push the “wandering” minority societies toward our region more than before and swell the ranks of ISIS militants.

Wasn’t it the case in the early 20th century when the Jewish think tank pushed Europe toward the Promised Land which was built based on the Protocols of [the Meetings of the Learned Elders of] Zion [a fabricated anti-Semitic text purporting to describe a Jewish plan for global domination] and created a hotbed of crisis called Israel?

It is worth mentioning that these productive think tanks – which transferred the Christian-Jewish crisis in Europe to the Middle East and transformed it into a Jewish-Muslim problem – are likely to be capable of following the same pattern when it comes to the Arab and African Muslims in their societies in the current circumstances, but this time around in a caliphate-related, tribal or sectarian form, and certainly in this region and near our borders.

The stage is not fully set for Iran’s cultural and civilizational presence and the [existing] half-open doors are likely to be slammed shut [at any time]. This is exactly the point where we need to be careful not to let our cultural, civilizational heritage be used as a tool to express the goals, remarks and gestures of this [power] or that.

We should not allow the African nationals and Arabs who are smoking water pipes in the European restaurants to turn into soldiers and tools of ISIS and the masterminds of a caliphate project to thrust at other Muslims and regional people with their swords, read out “[And spend in the way of Allah and] do not throw (yourselves) with your (own) hands into destruction (by refraining)”, and paint a distorted picture of Islam.

This is a key juncture, but not the final turn in the labyrinthine road of survival. If we negotiate this turn vigilantly, we will surmount the next turns throughout history more skillfully.