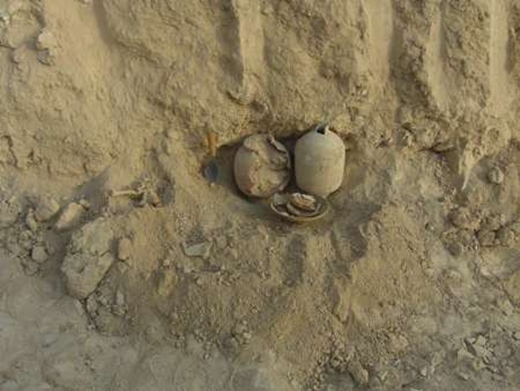 The recent finds have revealed that Persian tribes took up residence in Bojnourd at least 4,200 years ago.

Deputy Director of the Cultural Heritage, Handicrafts and Tourism Organization Ali Akbar Vahdati said that a Zoroastrian grave as old as 4,200 years has been discovered at the northeastern heights of Bojnourd in North Khorasan Province.

What comes next is a partial translation of a February 15 report the Islamic Republic News Agency filed on the find:

Vahdati said, “The discovery of the grave was made in 2012 during a project to build a park in Bojnourd. Back then the public announcement was put on hold so that further archeological examinations could be carried out. Unfortunately, operations by heavy machinery caused some damage to the skeleton and the vessels buried together with it in the grave.”

He further said that a bone sample from the skeleton was sent to a laboratory for DNA tests and studies on the vessels and the grave revealed signs of the Iranian civilization and Zoroastrianism in the region.

The ash found in the grave and the skeleton of a dog in an adjacent burial plot are indicative of Zoroastrian burial rites.

Vahdati added, “Further studies on the finds and the region suggest that there was an ancient cemetery in the suburbs of Bojnourd, an indication that back then some people took up residence in the Bojnourd Plain. The studies also confirmed that there has been a close cultural relation between the northern and southern parts of the Kopet Dag [a mountain range on the frontier between Turkmenistan and Iran’s North Khorasan Province] since 4,200 years ago.”

He went on to say, “The examination has revealed that there is a close resemblance between the finds in this region with those excavated in a hill in Turkmenistan’s Merv, suggesting that Zoroastrianism is older than it was previously thought.”

Vahdati added, “Although researchers and archeologists initially believed that people started taking up residence in the Bojnourd Plain during the Islamic Age, the recent evidence reveals that Persian tribes established residence in Bojnourd at least 4,200 years ago.”