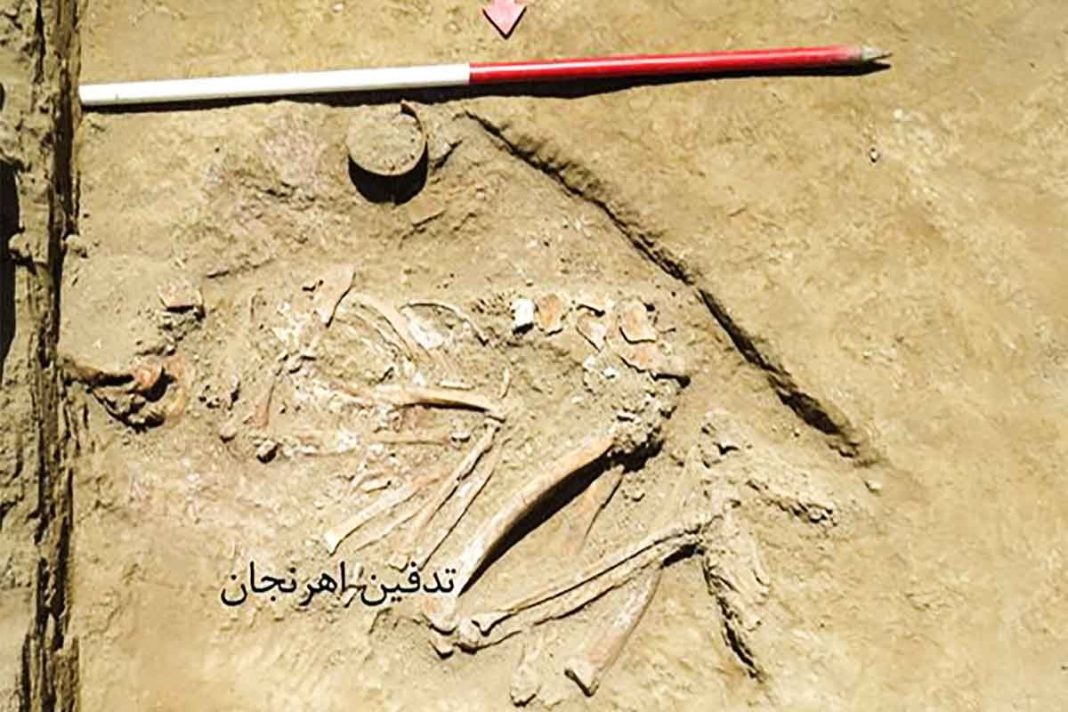 The head of the Ahranjan Hill Stratigraphy Program has announced the discovery of four tombs dating back to the Chalcolithic Age under rural houses. The hill is one of the most important historical sites in northwestern Iran.

Afrasiab Geravand, head of the Ahranjan Hill Stratigraphy Program, pointed out on May 28, 2022 that Ahranjan Hill is one of the most significant historical sites in northwestern Iran in the Neolithic period, and asserted: “After the archeological excavations of the area, 4 tombs have been identified in various depths dating back to Chalcolithic Age.”

He added: “The bodies are buried inside the village under the houses in squats or embryonic forms on the side, left or right in different directions and usually in a north-south or east-west directions.”

The bodies were buried individually and in one case in a mass grave (with three bodies) in oval or rectangular tombs.

According to the head of the group, the bodies that have been found are mostly without objects, and only in one case an earthenware cup and an obsidian blade were found next to the buried body.

The head of the archeological program in northwestern Iran said: “One of the burials has been covered with a layer of red ocher, and the traces of red ocher can be seen in the grave, as well as on the bones.”

The historic Hill of Ahranjan in northwestern Iran

The hill is one of the oldest settlements for human beings in the Middle East, dating back to 7000 BC.

The original size of the hill was much larger than the current remaining area until 40 to 50 years ago. A large part of it has been permanently destroyed due to poor maintenance. Due to the presence of ash in the layers of the hill, local people used the soil as a fertilizer for their gardens.

In expert examinations of the surface of the hill, a variety of stone tools, pottery and obsidian stones have been discovered.