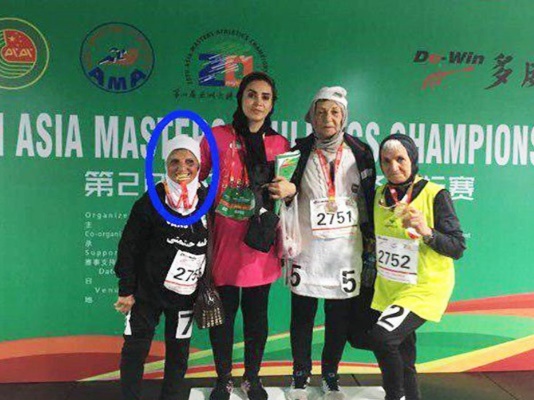 An elderly Iranian woman has bagged a gold and a silver medal in international track and field contests in China.

81-year-old Iranian woman Fatemeh Heshmati has been crowned the champion in international track and field competitions in China.

She has been doing sports professionally in the city of Shiraz in southern Iranian Fars province for years. She has already attended international competitions several times.

The lady’s high motivation at the age of 81 has surprised, and at the same time received compliments from the Chinese. News of Heshmati’s success is making headlines inside the country as well.

She was born in the city of Abadan, southwestern Iran, and migrated to Shiraz after the end of the eight-year Iraqi imposed war on Iran in the 1980s. Although she suffers from wartime wounds and has shrapnel inside her head, she keeps trying hard.

She says she has done whatever it takes to encourage young and old. The Shahrvand newspaper has conducted an interview with this Iranian athlete. The highlights of the interview follows.

First, tell us about the international competitions in China where you won a gold and one silver medal.

The contests held for veteran athletes and elderly people included a 5-km race-walking and a 1-km running event. Most competitors aged between 30 to 50. I took part in the event in the 80-year-old age group along with a Chinese lady. There were around 30 contestants at the starting line, but they competed separately in different age groups. The Chinese woman, who was younger than me, grabbed the gold. I received the silver medal. I didn’t know that she was my rival; otherwise I might have been able to overtake her. Of course, I got a gold medal as well. There were other Iranian competitors, who also received medals.

Who did sponsor you in the competition?

I’ve been a member of a sports club in Shiraz for 25 years now. We attended a match in Tehran recently. I finished first in my age group. After that, it was decided that I take part in the China competitions.

How did the Chinese and spectators who were there react to your presence at the event?

The Chinese behaved perfectly. They were so happy that they took pictures with me and filmed me. It was so interesting for them to see a woman at my age could take part in the competitions. Of course, I received no prizes. But it was so great for me to see their behaviour was so good. They liked me very much and I could feel it.

When did you begin to do sport? Tell us a little bit about your background.

I have been interested in race-walking since childhood. Even during the war when I was living in Abadan, I used to exercise at a football (soccer) stadium there. After that when I came to Shiraz, I did sport and race-walking whenever I could. One day when I was running on the track, a lady called me and asked if I was an athlete. Then she invited me to join a sports club, and now it’s been 25 years that I’m doing exercises. I have attended international competitions. I once got a gold medal in Malaysia.

Don’t you get tired of doing sports?

I never get tired. I’m proud of being able to do sports professionally at this age. I never feel old. I have lost one of my seven children has died. My husband, who had been wounded at war, passed away, too. My children are always happy at my successes and they encourage me. I attend competitions to promote the culture of doing sports among people.