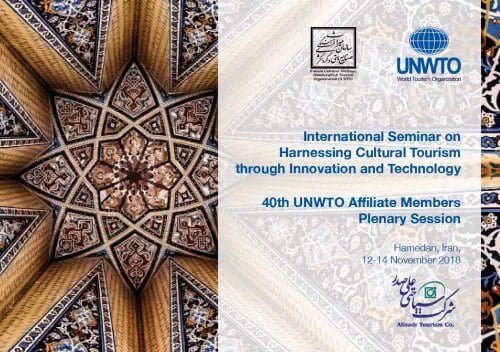 The 40th Annual Meeting of the World Tourism Organisation (UNWTO) was kicked off on Monday in the western Iranian city of Hamadan.

The summit was attended by a host of high-ranking guests including UNWTO Secretary-General Zurab Pololikashvili and Iran’s Vice President and head of Cultural Heritage, Handicrafts and Tourism Organisation Ali-Asghar Mounesan.

80 members of the UNWTO from 30 countries took part in the opening ceremony of the 40th UNWTO Affiliate Members Plenary Session: International Seminar on Harnessing Cultural Tourism through Innovation and Technology.

Pololikashvili was the keynote speaker of the Summit.

The World Tourism Organization (UNWTO), based in Madrid, Spain, is a United Nations agency in the tourism sector that deals with tourism affairs. Today, it is the world’s leading and most recognised international travel and tourism body.

Currently, the World Tourism Organisation has 557 affiliate members, including 16 from Iran. Hamadan Municipality, Alisadr Tourism Company and Ganjnameh Tourism Complex (all from Hamadan province) are among the members of the UNWTO.

Hamadan with about 1,800 tourist attractions is considered one of the five most attractive cities of the country.

Qorban Historical Tower, Haj Agha Torab bath in Nahavand, Lotfalian Museum in Malayer, Masoudi House and Mausoleum of Mir Razi ad-Din Artimani in Tuyserkan are other attractions in the province that are visited by tourists every year.

As a member of the board of directors of this meeting, Alisadr Traveling Company played a significant role in hosting the UNWTO Summit in Hamadan.