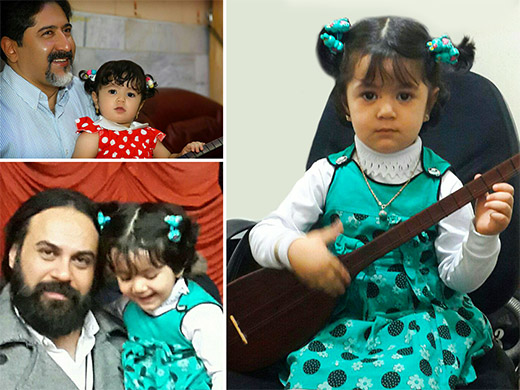 Today, on January 26th, Roshana will be exactly 3 years old. She is already an accomplished Tanbur player. She sometimes sings along when she plays, but is never out of tune, as she can follow the music very well.

Seyyed Payman Haqiqi, Roshana’s father, said in an interview with an ISNA (Iranian Students News Agency) journalist in Kermanshah,“ Roshana became familiar with the sound of the Tanbur( a Persian long necked  string musical instrument) at home right from early days. This led her to pick it up and begin to play, from the age of 2. Her mother and I always encouraged her, and thankfully she was also a talented learner. In a short time, she learnt how to play it.”

Masters Hessamedin Seraj and Hazhir Mehrafrouz are her favorite singers, and she has souvenir photos with both of them. Now, she is preparing for her first public performance – the opening of Kermanshah Fajr Music Festival.

Roshana Sadat Haqiqi was born into a music-loving family on 25th January 2013, and, as her father claims, from her early days she would fall asleep to the sound of the Tanbur. From this passion, she began playing the Tanbur at the young age of 2.

Before she was born, her father made her a little Tanbur, and today, Roshana uses the very same instrument to practice, sitting next to her father.