22nd Luxury Train in Iran with 78 Foreign Tourists on Board 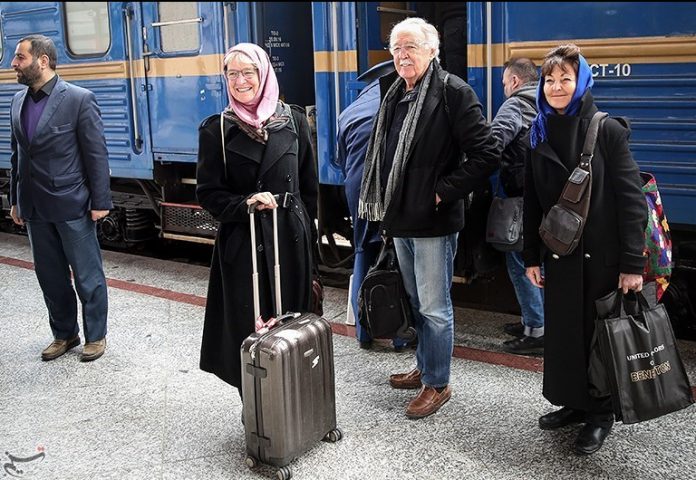 The Golden Eagle luxury train has arrived in the central Iranian province of Isfahan with tourists from 11 Europe, Asia, and America on board.

The luxury train with 78 foreign tourists from the UK, the US, Germany, Switzerland, Russia, Malaysia, Australia, the Philippines, Mexico, Hong Kong, and Norway on Friday morning arrived in Kashan amid a warm welcome by the city’s dignitaries.

According to a Farsi report by IRNA, the Golden Eagle also known as the Jewellery of Heart of Persia entered Iran a few days ago. The train includes eight Russian wagons, one Russian power generator and a luxury wagon named Ghazal with a capacity of 40 passengers dedicated to the Iranians’ Foundation.

The foreign passengers of the Eagle Golden arrived in Isfahan on Friday and were taken on a tour of the historical and cultural sites of the central city.

Travelling through the ancient land of Persia, the journey takes the passengers of the luxury train to destinations that have been off the tourist map for many years and sites that are not frequently visited by western visitors; this has made the voyage more special.

The tourists are set to spend 18 days in Iran visiting all the cultural and historical sites as well as natural attractions of the Iranian cities including Mashhad, Tehran, Isfahan, Kerman, Yazd, Shiraz, Sa’adat Shahr, Kashan, Arak, Shushtar, Shush (Susa), Veresk and Pole Sefid. The tour will come to an end on November 20 in the holy city of Mashhad. The train will leave Iran then through Sarakhs border in the northeast.

Golden Eagle Luxury Train says it is the world’s leading operator of exclusive, long-distance rail tours. It has been offering rail journeys across Europe, Asia, Africa and North America over the last 25 years, and presents a range of all-inclusive, European rail cruises aboard the Golden Eagle Danube Express, according to its website.

According to officials of Isfahan, the luxury train is the 22nd tourist train arriving in the city over the past three years.