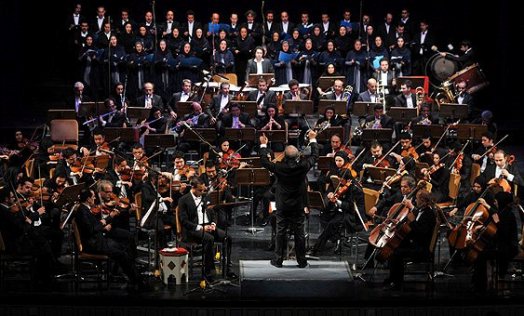 With an agreement between police and Iran’s Ministry of Culture and Islamic Guidance, musical events are unlikely to be canceled due to a lack of coordination.

On December 25, Iran, a daily, carried a report about the resumption of concerts in Tehran after a two-month hiatus because of the mourning months of Muharram and Safar. The following is a partial translation of the piece:

With mourning functions coming to an end, musical instruments are getting tuned to be played at concerts. After an interval of two months, concertgoers are looking forward to watching the performance of their favorite musicians.

With the concerts, comes into force a new agreement between police and the Music Office at the Ministry of Culture and Islamic Guidance. The deal eliminates the possibility of concert cancellations because of a lack of coordination between the police and organizers.

Rose, a newly-formed band led by Nazli Bakhshayesh, has already performed to a women-only audience at Tehran’s Niavaran Cultural Complex.

Vahdat Concert Hall will play host to Zaman Classical Guitar Orchestra conducted by Farzad Daneshmand in the final days of December. The orchestra will have staged two more charity concerts for cancer patients by yearend [March 21, 2015].

Iranian pop band Seven will put on a concert at Milad Hall at Tehran International Fairground in mid-January.