19% Decrease in Cultivation of Opium in Afghanistan 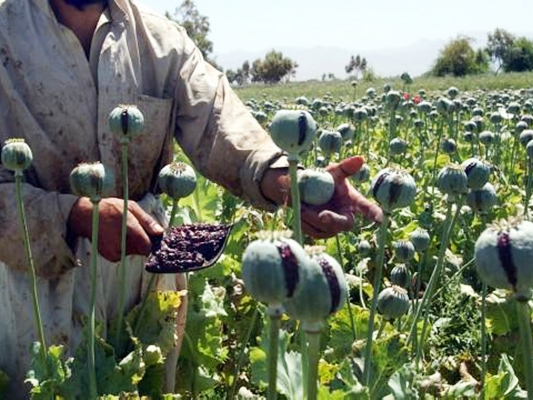 Afghanistan’s Minister of Counter Narcotics announced that less opium has been cultivated in the county in 2015, but it is not satisfactory yet.

According to a report by Mizan, as translated by IFP, Salamat Azimi noted that there was a 19% decrease in the amount of opium cultivated in Afghanistan during 2015.

However, he added, the statistics are not satisfactory.

He highlighted people’s role in the eradication of illicit drugs, and urged all Afghan people to work in this field.

Nasir Ahmad Durrani, the Minister of Rural Rehabilitation and Development, also noted that the burden of fight against illicit drugs cannot be put on the shoulders of only one ministry.

“To eradicate illicit drugs, all people and authorities should join hands.”

He pointed to the roles that the ministries of Education, Higher Education, Intelligence, and Culture can play in the campaign against narcotics by providing people with information about the harms of drugs.

Durrani referred to unemployment as the major cause of increase in drug addiction and opium cultivation, saying that the Ministry of Rural Rehabilitation and Development is trying to decrease the number of addicts by creating more jobs.

He also highlighted the roles of religious authorities and the Ministry of Agriculture in the fight against drugs, saying that the cultivation of wheat and saffron can replace that of opium.

“Cultivation and production of narcotics is against Islam and Afghanistan’s Constitution,” a deputy intelligence minister said, highlighting the need for serious fight against narcotics.