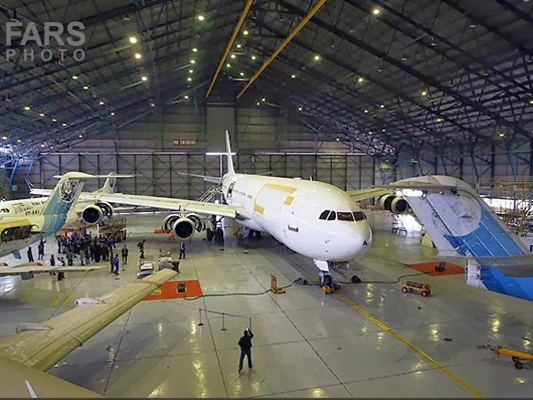 A recent media report says about one and a half years after the implementation of the Iran nuclear deal, at least 124 out of 298 planes in the Islamic Republic’s air fleet remain grounded due to the government’s failure to import spare parts from Europe.

According to a Farsi report by Nasim Online, nearly 40 percent of the country’s planes are languishing in the hangers across the country. The full text of the report is as follows:

124 planes in Iran are crippled allegedly either due to outdated maintenance checks or shortage of engines and spare parts. The crippled planes are on the verge of being stored as out of service planes, but they can be restored after an overhaul.

Iran’s aerial transportation system has been among the most outdated aerial systems in the Middle East over the past four decades. Before the implementation of JCPOA in 2016, there were 124 crippled planes in Iran. On the other hand, the average useful life of 166 operating planes stood at 23 years old.

In the early days of JCPOA implementation, Iran Air (Homa) signed a contract with the French manufacturer Airbus to obtain the mid- and long-range planes through a lease purchase. The value of an earlier contract with Airbus to obtain 228 planes stood at $25bn, but the Iranian side decided to leave out A380 planes from the contract reducing its value to $10bn. The purchased planes are set to be delivered to Iran Air within a 10-year period beginning in 2017. Later, Iran Air signed a $16bn deal with Boeing for 80 planes. The planes are expected to be delivered in ten years. Add to the list, 45 Airbus planes to be delivered to Iran Air Tour, 28 planes to Zagros Air as well as 30 Boeing 737 planes to Aseman.

International standards require the Islamic Republic of Iran to exclude outdated planes from its air fleet. Outdated aerial fleet have already hampered the operation of Iranian airliners making them notorious for their long delays. Back in May, Mehrabad airport had 6,162 flights out of which 3,139 flights were carried out with delay.

According to Iran’s Civil Aviation Organization, Iran Air Tour with 74 percent, Atrak Air with 65 percent and Ata Air with 61 percent had the longest list of delayed flights from Mehrabad airport during May.

At present the number of operating planes produced in 2000 stands at 20 which is a poor standard for Iran’s aviation system. The figure included the planes purchased just recently. Iran’s aerial system needs at least 556 planes by 2025.

One of the main points raised during Geneva talks which led to the clinching of the nuclear deal between Iran and the world powers was repairing 120 crippled planes in Iran. One and a half years after the implementation of the nuclear deal, not only no plane has been repaired, but four other operating planes have been crippled.

So, it seems the JCPOA has not resolved the problems of Iran’s aerial transportation system especially because today providing the spare parts have become much harder compared with previous years.

Relevant officials in the industry maintain that over the past two years, Iran has come under more pressure in civil aerial field.

Most of the manufacturers have already stopped offering services to Iran under various pretexts. Despite the Iranians’ earlier expectations, the JCPOA has not yet relieved sanctions on Iran in civil aerial industry. Another issue which has put Iran’s aerial system in trouble is the limitations on banking systems which have not been removed yet.