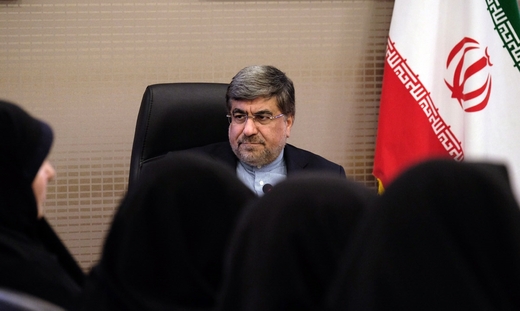 The Minister of Culture and Islamic Guidance said, “The Government of Hassan Rouhani has tried to apply open-door legal policies to these fields, which prevent unnecessary objections.”

As reported by IRNA Cultural Group, Ali Janati, in a meeting with female managers within the Ministry of Culture and Islamic Guidance and related organizations, said, “The beginning and the end of this year is heralded with the holy name of Fatemeh Zahra, and from the beginning of the year we witnessed the effects of her blessings in our country, includingthe much-needed rain.” [Fatemeh Zahra was the daughter of Prophet Muhammad and wife of Imam Ali, and is referred to as Kosar, meaning abundant blessings]

The member of the 11th government cabinet talked about the government’s financial difficulties last year, comparing it with the Holy Defense period [the 8-year Iran-Iraq war]. He said, “There has been no other year as difficult as 1988 (the final year of the war) financially for the government since the Islamic Revolution, but last year the government coffers were empty and the oil price was low. The government managed the country through such conditions with the minimum of side effects. This last year was one of the greatest achievements of the government.”

The Minister of Culture and Islamic Guidance also mentioned the finalizing of the JPCOA as another great achievement of the current government. He said, “By finalizing the JPCOA, the sanctions that were cruelly imposed on Iranians and were paralyzing the national economy were lifted.”

He added, “During the sanctions, most of our factories were working only at 20-30% capacity. Many of them didn’t even have the required raw materials and couldn’t purchase them due to the lack of a banking transaction system. 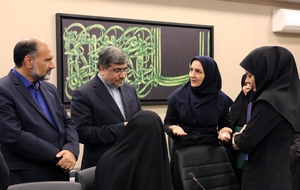 Creating a New Atmosphere in the International Arena

The Member of the Supreme Council of the Cultural Revolution mentioned, “The worst damage of the sanctions period was the destruction of Iranian respect and dignity. European countries were not even welcoming Iranian authorities and managers.”

He continued, “After sanctions were lifted, a new atmosphere towards Iran has been created in the international arena. Now, many European as well as non-European countries have shown their interest in investment and developing their relations with Iran.”

Janati then referred to President Rouhani’s trips to France and Italy, saying, “The welcome shown to the President in both countries was unheard of. This shows the new perspective of the European countries toward Iran.”

He highlighted how the police in France didn’t allow opposition groups to protest against the Islamic Republic of Iran during President Rouhani’s time there.

The Government is Implementing Open-Door Policies in Cultural Fields

Janati said, “Within the legal framework, the government has tried to provide conditions in which writers, journalists, musicians and the whole family of art and culture can carry out their activities in peace, without any unnecessary objections.”

Important Developments in the Field of Cinema

He added, “People reconciled with cinema this year, and during the New Year holidays we witnessed extraordinary cinema attendance, even late at night or for early morning showtimes.”

Renovation of Theatre Halls in the City Theatre Complex

Janati also said, “Considering we named the last year the Year of Theatre, we renovated theatre salons in the City Theatre Complex, which were used for the Fajr Theatre Festival.”

The Minister of Culture and Islamic Guidance talked about providing a cultural balance across the country as being another important government policy, and said, “We have tried to provide cultural and artistic facilities not just exclusively for the capital city, but to spread it to other towns and cities over the whole country.”

“In this regard,” he continued, “All the departments of the Ministry are bound to allocate 20% of their annual budget for cultural and artistic activities in the provinces.”

Janati drew attention to the fact that the New Year has been named as the year of Resistance Economy, saying, “Promoting cultural discourse about the Resistive Economy is the responsibility of the Ministry of Culture and Islamic Guidance, the media, Islamic Republic of Iran Broadcasting (IRIB) and other artistic and cultural organizations.”

He declared, “The Ministry of Culture and Islamic Guidance, relying on its tools and facilities like films, cinema, publications and books, visual arts and so on, can take actions in terms of promoting cultural discourse related to the Resistive Economy.”