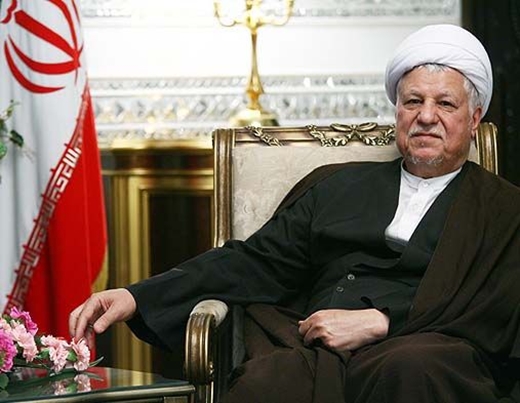 Ayatollah Hashemi Rafsanjani has hailed the tireless efforts by the Iranian negotiating team.

The chairman of the Expediency Council has hailed the strenuous efforts of the Iranian nuclear negotiating team, taking a swipe at those who oppose the nuclear agreement between Iran and P5+1.

“Make no mistake, the Zionist-led media outlets will act as a mouthpiece for the opponents of the nuclear agreement between Iran and P5+1, because they can easily press ahead with their crimes when the West is in conflict with Iran and the region is plagued by a policy of Iranophobia,” the Islamic Republic News Agency quoted Ayatollah Akbar Hashemi Rafsanjani as saying on Saturday.

He thanked the Iranian nuclear negotiating team for their tireless efforts and congratulated the officials on the country’s nuclear achievements, saying that logic has been the Iranian nation’s weapon of choice over the course of history, especially in the struggle which led to the victory of the Islamic Revolution.

Rafsanjani further said that such logic convinced world powers that the impeccable security and stability in Iran is unmistakably true despite brewing tensions in many parts of the world, especially in the Middle East region.

The top councilor then pointed to US President Barack Obama’s mention of reaching a ‘historic understanding’ with Iran and said many world countries have now developed such understanding of Iran and Iranians.

He also highlighted the importance of the three months ahead [before the July first deadline] and said, “No doubt, Israel and its lobbies together with firebrands, hardliners, war hawks and those who fear peace and calm will go to great lengths, using their pens and measures, to throw a wrench into the works [of the nuclear talks in the coming three months].

Rafsanjani then praised the Supreme Leader’s guidance of and support for the Government of Prudence and Hope and the negotiating team, saying, “The Islamic establishment has gone through three dangerous periods, but we managed to negotiate all rocky paths. We need to stay vigilant and be careful not to be filled with smug self-satisfaction after crossing the dangerous passes”.