What Zarif told reporters and fellow commuters on the subway 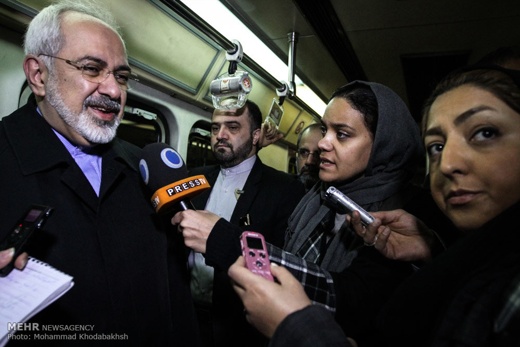 “I wouldn’t get involved in things I have no knowledge about. Diplomacy is the only thing I know,” said Foreign Minister Zarif.

On Monday January 19, which marked the Clean Air Day in Iran, President Rouhani and members of his Cabinet took the subway to work. On Tuesday Haft-e Sobh daily carried a report on what Foreign Minister Mohammad Javad Zarif told reporters and ordinary citizens who happened to be on the same car during the morning commute. The following is a partial translation of the brief report:

A reporter with the Iranian Students News Agency asked the foreign minister what he would do if he were in charge of the Environment Protection Organization to keep the air clean. In response Mr. Zarif said, “I wouldn’t get involved in things I have no knowledge about. This [diplomacy] is the only thing I know.”

In reaction to critical comments by some media outlets and officials about the walk he took with US Secretary of State John Kerry on the streets of Geneva, he said that focusing on the peripheral matters won’t help us solve the problems. “What we did in Geneva was simply designed to clear the rather tense air that prevailed in the conference room.”

At this point a reporter asked the foreign minister, “If open-air meetings contribute to progress in the talks, why don’t you hold all your meetings outdoors?”

In response the top diplomat said, “That is a good point. The only problem is that it is too cold outdoors and cold air may give rise to other problems.”

When bombarded with questions by reporters, the foreign minister said, “Down here on the subway, I can’t run away from you.”

And in response to a question as to how often he rides the subway, he said, “When I was between jobs, my wife and I would take the subway to the grand bazaar, not necessarily to buy stuff, but have fun.”

At this point a passenger told Mr. Zarif that some view him a new Mosadegh [a nationalist prime minister who played a key role in the nationalization of the oil industry] and thanked him for standing up for the country’s national interests.