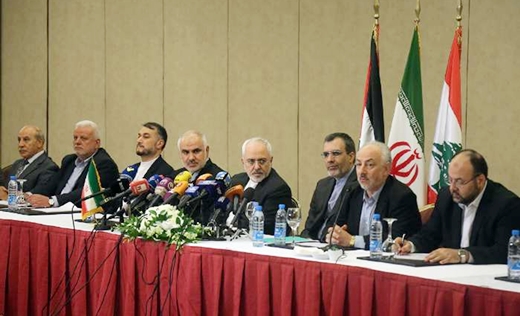 The representatives of Palestinian and Lebanese groups call on Iran to tap its diplomatic potential to end sectarian strife in Syria, Lebanon, Palestine and Yemen.

Iran holds out a hand of cooperation to all regional countries, its neighbors and resistance movements to establish coherent, brotherly relations in the region, Foreign Minister Zarif, who is in Lebanon on the first leg of a regional tour, said in a meeting Wednesday with the representatives of Palestinian and Lebanese groups.

Zarif added that only the Zionist regime and the Zionists are benefiting from rifts and wars among regional nations.

He called on Muslim nations to build on their common ground to end their differences.

He said, “As a country which believes in cooperation and constructive interaction between regional countries, Iran holds out a hand of cooperation to you all,” adding, “Today, we face a domestic threat of extremism, terrorism and sectarianism. We need to tap into the Islamic message of unity to tackle these threats. To that end, we need to be farsighted and take into account the interests of all countries and the Islamic community rather than being narrow-minded or focusing on personal concerns.”

At the beginning of the meeting, the representatives of the Palestinian and Lebanese groups congratulated the Islamic Republic of Iran for clinging to its rights through steadfast, logical diplomacy in talks with world powers.

They also called on Iran to tap its diplomatic potential to end sectarian strife in Syria, Lebanon, Palestine and Yemen.