Zarif, Kerry to meet in Geneva on May 30 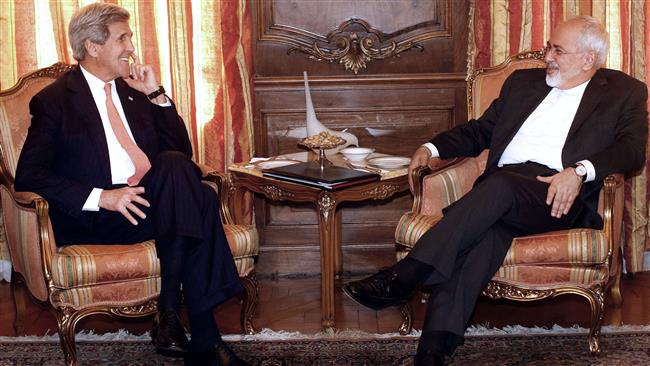 The Iranian and US top diplomats are to meet in Geneva on May 30 to help narrow the differences between Tehran and P5+1 over writing the text of a final agreement.

Iranian Foreign Minister Mohammad Javad Zarif and his American counterpart John Kerry are set to meet in the Swiss city of Geneva amid the ongoing negotiations over Tehran’s nuclear program.

The two top diplomats are due to hold the meeting on Saturday, according to Iran’s Deputy Foreign Minister for Legal and International Affairs Seyyed Abbas Araghchi.

Consultations between Zarif and Kerry will help narrow differences between Tehran and P5+1 over writing the text of a final agreement.

Representatives of Iran and P5+1 began their latest round of talks on drafting the text of a final deal over Tehran’s nuclear program in the Austrian capital of Vienna on Wednesday.

Earlier in the day, Araghchi, who is now in Vienna for talks with representatives of P5+1, said the two sides are working on a timetable to synchronize their undertakings after a final accord is clinched.

The senior Iranian nuclear negotiator said the Islamic Republic would only accept an agreement whose details are “favorable” to Tehran.

Iran and P5+1– the United States, Britain, France, Russia and China plus Germany – wrapped up their latest round of talks in Vienna on May 22.

The two sides have set July 30 as the deadline for a final deal.